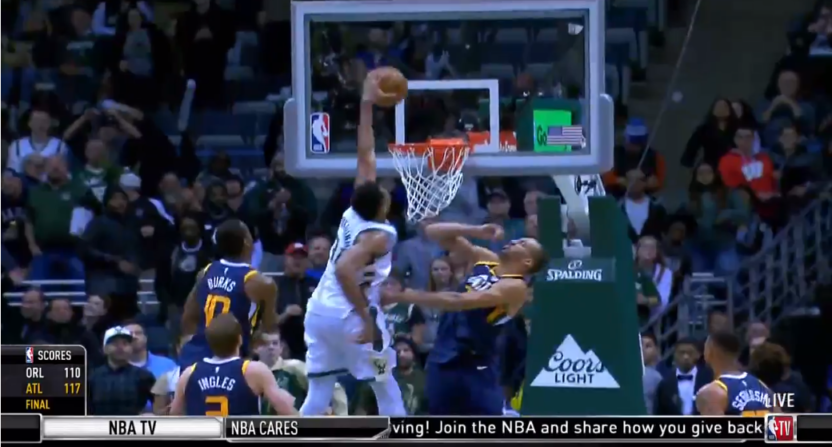 It’s hard to imagine an NBA player having a worst minute of basketball than Brook Lopez did in the Lakers’ loss to the Cavs.

First, he avoided a poster dunk from LeBron James by just having a more embarrassing display of defense instead, and TNT’s Reggie Miller made sure to call that out.

Under a minute later, Lopez couldn’t finish a layup that he should have, but did earn a trip to the foul line. And… he — as an 80% shooter from the line — airballed both free throws!

And seconds later, he got called for goaltending. All of this happened in exactly 60 seconds. Brutal.

David West had an awesome poster dunk of his own

The Warriors’ David West is 37 years old, but he sure doesn’t look that age on this filthy poster dunk he threw down vs the Blazers.

The Browns actually took a game to overtime, but then did very Browns things

With the Browns-Packers game tied in overtime, Cleveland quarterback DeShone Kizer tried to make a crazy throw while backpedaling instead of just taking the sack. The sack would’ve resulted in the Browns having to punt, but that’s better than throwing an interception to give the Packers field position inside the Cleveland 45. Yikes. This is why the Browns are 0-13.

A few minutes later, the Packers had 3rd-and-6 at the 25. Now, the Packers were already in high percentage field goal range anyway, but the Browns at least wanted to force that attempt, and maybe there would be a miss, block, or bad snap. Instead, Brett Hundley threw a wide receiver screen pass to Davante Adams, and the Browns blew multiple tackles, allowing Adams to scamper into the end zone for a game-winning touchdown. And to be fair, this is a pretty nasty spin move from Adams (who will get paid very well this offseason in free agency).