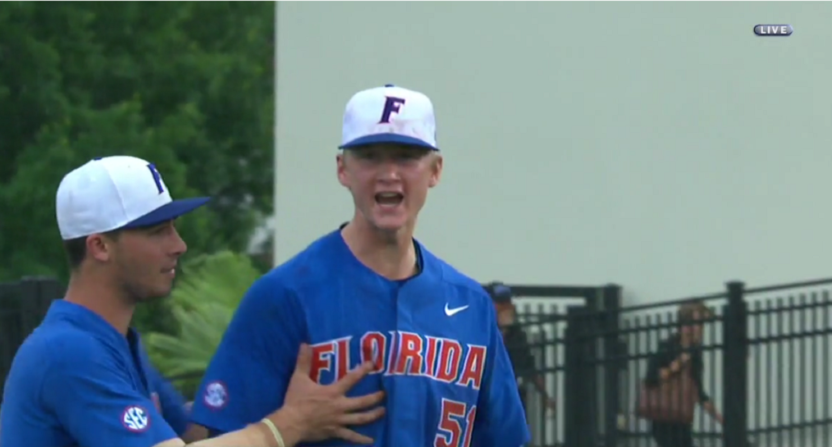 The Golden State Warriors got their redemption after blowing a 3-1 series in last year’s NBA Finals, to take down the Cleveland Cavaliers in five games this time around.

While it took five games to finish the job, the series was virtually over when Kevin Durant nailed this pull-up three in the final minute of Game 3 to help complete a late road comeback for Golden State:

The Cavs responded with a remarkable performance in Game 4 (137-116) to stay alive in the series, with this ridiculous LeBron James play serving as the game’s main highlight:

But the Warriors put things away in Game 5, and they probably preferred it that way in front of their home fans at Oracle Arena.

Kevin Durant was named NBA Finals MVP, and here he was celebrating the game with his mom and Steph Curry after the win:

It would honestly be a surprise — provided the Warriors’ stars stay healthy — if we didn’t see this again next year. Vegas says that the Warriors are going to be the highest-ever favorite entering a season in any sport.

Penguins take down Predators to repeat as Stanley Cup champs

The Pittsburgh Penguins are the newest example of the NHL being a dynasty-driven league after beating the Nashville Predators in Game 6 to win their second consecutive Stanley Cup.

And he’s destroying Statcast records. On Saturday, Judge hit a 121.1-mph homer, the hardest-hit ball in the Statcast era (the last three years):

You may notice a trend by the hardest-hit balls of the 2017 MLB season:

Florida Gators pitcher is very angry about the rain

Florida pitcher Brady Singer was quite, quite mad about a storm coming in and causing a rain delay during Game 3 of the Super Regionals against Wake Forest on Monday afternoon. Rain had been an issue for the entire series, and this was to decide a trip to the College World Series. So you can understand the anger, even if this was perhaps an extreme tirade:

The Gators still won the game, and with it, a trip to Omaha. All’s well that ends well.

Yikes… this is brutal. Read more about the play and Davidson’s run here.