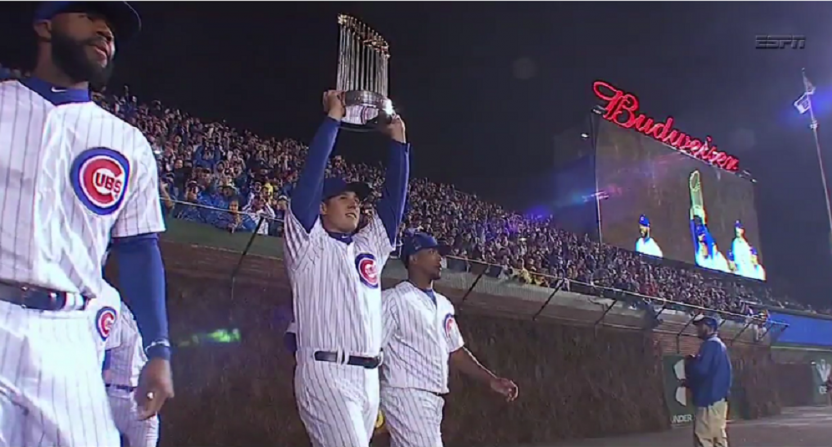 Sergio finally gets his major on thrilling Sunday at The Masters

It took Sergio Garcia 74 major tournament appearances, but Sergio got his first major victory at The Masters over the weekend, and it went down to a wild finish on Sunday (which it seems most of you missed):

Sergio’s eagle at 15 on Sunday was particularly impressive:

Sergio went to a playoff with Justin Rose, and sank this putt to win:

Cubs players raise their championship banner; Anthony Rizzo walks out with World Series trophy and then has walk-off hit

It was a special night at Wrigley Field on Monday, as the Chicago Cubs had ceremonies to raise their championship banner. It was very cool how they did it, with the players taking their turns raising the banner, and the team then walking back out onto the field with Anthony Rizzo raising the World Series trophy in the air.

There was still a game to be played, and it was an NLCS rematch against the Los Angeles Dodgers. The game ended up being a very good one, and it was fittingly Anthony Rizzo that delivered a walk-off hit vs Kenley Jansen:

DU won their 8th national title in hockey, and their goaltender then dropped an F-bomb on ESPN

The Denver Pioneers are national championsafter a 3-2 victory over Minnesota Duluth, and those three goals were all scored by sophomore Jarid Lukosevicius. Here’s the third goal to complete his hat trick:

And here are the final seconds of DU’s win: