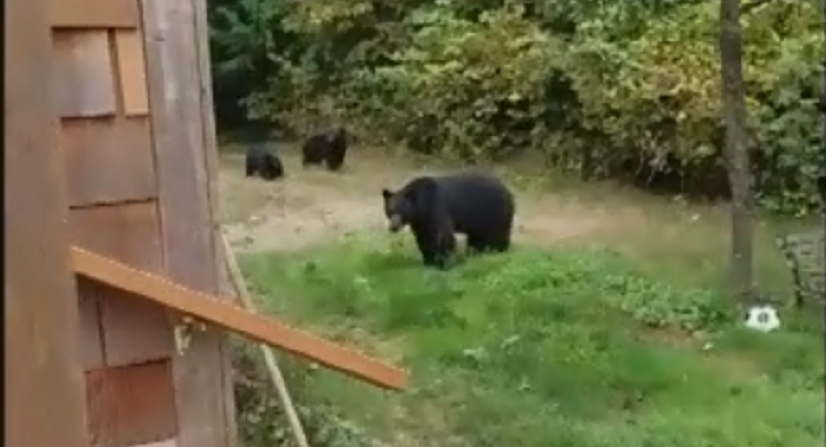 We have a Canadian writer on staff (actually more than one, but this is specific to one), and Andrew is one of the nicest people I’ve worked with. I do sometimes struggle to tell if he’s actually happy with me or not; he’s so unfailingly positive that I end up doubting the sincerity of his positivity, assuming that he must be holding in all kinds of complaints. Surely no one could be that happy with me, right? I mess up all the time! Is he secretly mad about everything? Just some things? How can I know???

Essentially, that blank Canadian canvas of polite behavior becomes a projection screen for my own insecurities.

Seriously, though, Andrew is great, and one of my favorite people despite the fact I only know him virtually.

Anyway, here’s a story about a Canadian man who walked out to find a mother bear and two cubs in his backyard. He had to go to work, and presumably didn’t want to risk being mauled by an angry bear while simply trying to walk out to his car, so he did what anyone would do: politely but firmly asked them if they wouldn’t mind leaving.

When Jordan Cote heard his tenant’s dog barking outside on Monday, he walked out onto his deck to find a black bear with two young cubs just metres away.

“I didn’t even realize what was going on until I walked around the corner and the two cubs were attached to the mama bear’s leg,” Cote told CTV Vancouver. “[The dog] didn’t leave the deck area and the bears never approached her. They kept their distance.”

Cote took the dog inside and then returned to film the bears.

“I need you guys to go,” Cote can be heard saying to the unwanted visitors in his video, followed by a “thank you” when the bears begin to turn around.

“I hope you enjoyed my yard,” he continues. “Have a good day.”

It somehow gets more Canadian:

Cote, who has lived on the rural property for two years, said he’s never seen bears in his yard before. He said he was shocked at how calm the mother remained.

“The whole encounter is so casual. I’m like, this is Canada,” he said. “If you remain calm, the bear remains calm. We all can co-exist.”