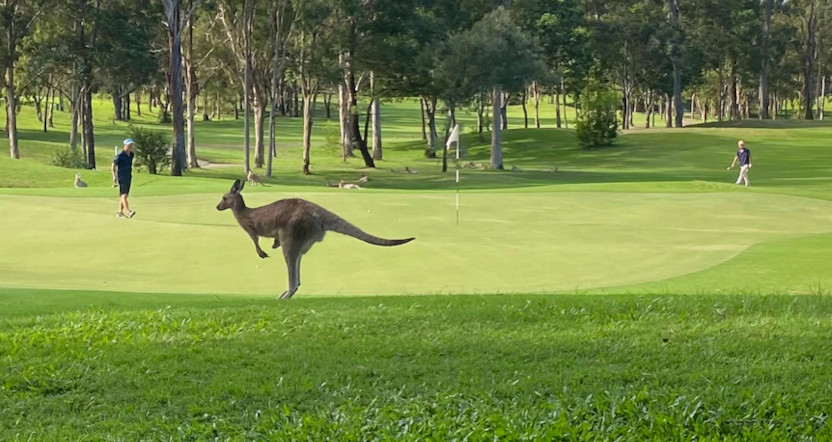 There are plenty of cases of odd and potentially-dangerous animal encounters during golf, but a kangaroo attack is a new one. That’s what happened to a 69-year-old woman at Arundel Hills Golf Club in Arundel, Queensland, Australia on Friday, though. Alexandria Utting and Dominic Cansdale of the Australian Broadcasting Corporation have more on that:

The 69-year-old was “stomped” and scratched by a large female kangaroo while on the fairway at Arundel Hills Golf Club just after 9am on Friday.

She suffered lacerations to her jaw, arms and legs, while sustaining soft tissue injuries to her head.

…Queensland Ambulance Service (QAS) operations supervisor Joel McEwan said the woman was attacked “without warning” after the animal came from the side of the course.

“She’s fallen to the ground at that first kick and when she’s been on the ground, she’s been stomped a number of times by the kangaroo,” he said.

Mr McEwan said the woman was “quite upset” when paramedics, including advanced care crews, arrived at the scene.

“Obviously, it’s a shock being attacked by quite a large kangaroo,” he said.

That piece goes on to include McEwan saying that “kangaroo attacks were not unheard of on golf courses in the city, where there are many kangaroos.” And this is not the first time we’ve seen kangaroos interfere with sports, with them also making their impact felt from soccer to cycling. So, if playing golf in Australia, watch out for kangaroo stompings.

[ABC.net.au; kangaroo on golf course image from Steve Keen/ABC Gold Coast. It is unclear if this is the kangaroo in question.]