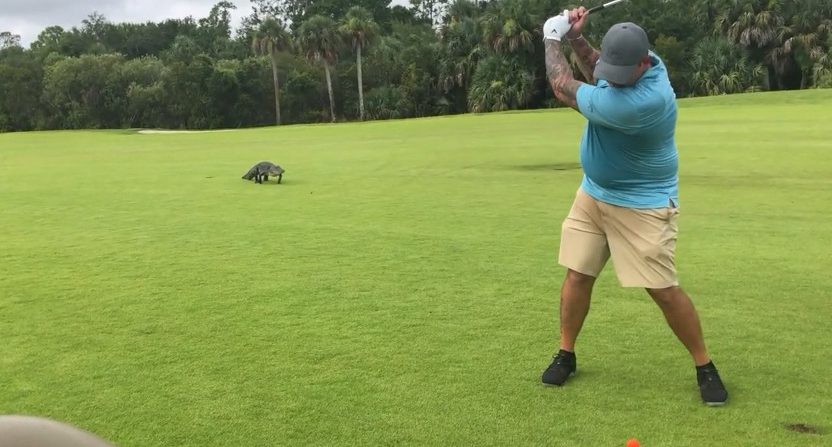 There’s quite a history of alligators on golf courses, from gators at PGA Tour events to gators wandering through lower-profile tournaments and fighting each other to media personalities’ interactions with gators. But for Florida man Michael West, a gator approaching wasn’t enough to get him to hold off on taking a shot. This week, West’s wife Michelle Walsh posted video to Facebook of a gator wandering up behind West while he was taking a shot at the Heritage Landing Golf & Country Club in Punta Gorda, Florida. Here’s video of that:

Here’s what West told Mark Price of McClatchy News about this earlier this week:

“I was lining up my approach shot from about 125 out. I knew he was coming up diagonally behind me,” West told McClatchy News. “He got to about 15 feet before he laid down as I swung. … My buddy Grant was getting a little nervous and wanted me to hurry up. … I was far more worried about leaving myself a makeable birdie putt than him (the alligator).”

West hit a pitching wedge to within 8 feet of the flag, then surrendered the hole to the gator. “He was very likely headed to the bigger lake across the fairway,” West said. “He was just going about his business. It was great. I get to have a dinosaur watch me play.”

And he went on to say that’s not the closest encounter he’s had with a gator while playing golf. But they’re not a big concern for him:

“I’ve had to drop due to walking up and seeing my ball a foot from a 10-foot animal,” he said. “If there’s water, expect there to be an alligator in it or near it. They are prehistoric creatures, that don’t want any more interaction than you do up close. Respect their space, and they will likely do the same.”

That’s a logical approach, and it helps explain why West was so unperturbed here. And calmly taking a shot despite an approaching alligator seems a lot smarter than, say, jumping on one.

[UPI, The Miami Herald, image from video posted at Fox 29]