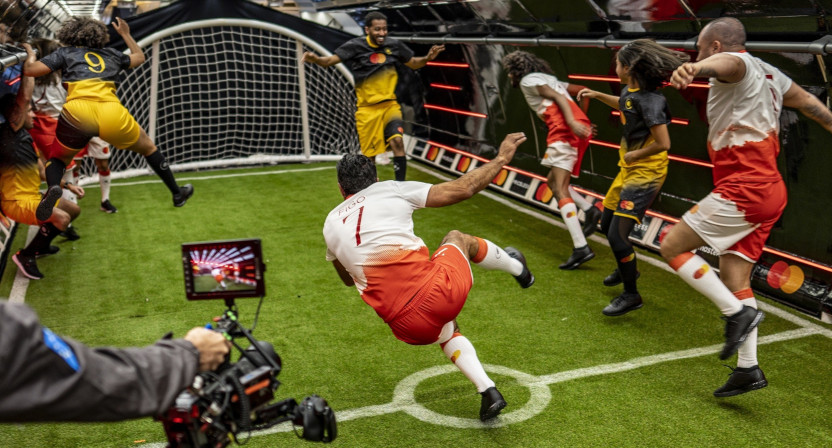 Over his 1989-2009 professional career, famed Portuguese winger Luís Figo played in a lot of different venues. On the club side, Figo played for Sporting CP, Barcelona, Real Madrid and Inter Milan. He also won a then-record 127 caps for the Portuguese national team, and was a key part of their runner-up appearance at Euro 2004. And he won FIFA’s Ballon D’Or as the top men’s player in the world in 2000.

But 13 years after his retirement from professional soccer, Figo may have played in his most unusual setting yet. He joined seven other players to play a four-on-four match on a plane on a parabolic flight (to simulate zero gravity) that reached 20,230 feet, setting a Guinness World Record. The flight in question took place on Aug. 20 above Bordeaux, France, but Guinness World Records posted footage of it to YouTube Tuesday:

This flight was organized by Mastercard, a company Figo has been an ambassador for for some time. Here’s more on this from their release this week:

“Football is not just a game – as the world’s most popular sport, it is a celebration of the human spirit, igniting passion and pride for millions every day. This is a historic moment for Mastercard as we take the world’s love for the sport to extraordinary new heights. What better way to recognize the beautiful game than by creating an out-of-this-world Priceless Surprise as we continue to connect people to their passions,” said Raja Rajamannar, Chief Marketing and Communications Officer and President Healthcare, Mastercard.

…”Football transcends boundaries and unites people around the world. I have played in stadiums where the electric atmosphere sparks emotions that cuts across cultures and nationalities; this was the exact same experience I had playing this beautiful game at 20,000 feet above ground with a group of fearless football fanatics taking their passion for the sport to unprecedented heights,” remarked Figo.

Remarkably enough, this is not the first highly-unusual venue Figo has played in for a promotional campaign. In 2002, he was a key part of Nike’s famed Terry Gilliam-directed “Secret Tournament” $100-million ad campaign, which featured top players from around the world playing in 3-on-3 matches inside a cage (with the legendary Eric Cantona as the chairman and referee). In that campaign, Figo joined Roberto Carlos and Ronaldo on Os Tornados, and that team made it to the tournament final, but lost to Triple Espresso (Thierry Henry, Francesco Totti, and Hidetoshi Nakata).

However, that led to a rematch, on the ship but no longer in the cage. There, Figo scored the winning 199th goal that weakened the ship and let water rush in, causing the players to swim to shore:

So this is just the latest unusual moment for Figo. But it’s a pretty cool one.