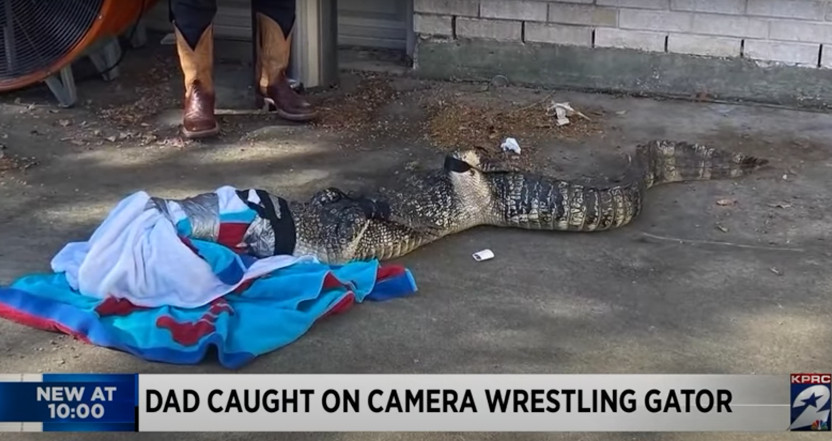 It’s not just Florida Man that has to deal with alligators. On Tuesday, in Missouri City, Texas, Mike Trinh was all prepared to take his younger daughter to her first day of middle school. Then, she reported that an alligator was in the driveway. Trinh tried calling authorities for help, but couldn’t get anyone to come, so he took matters into his own hands based off his past watching of Steve “Crocodile Hunter” Irwin’s nature shows.

Those shows included the tip of putting towels over alligators’ heads to calm them down. Trinh took several shots at that, eventually getting a towel over the gator. That calmed it enough to let him drive past and get his younger daughter to school safely.

Then, when he returned, he and his 19-year-old daughter teamed up for a full gator relocation: he put the gator in a headlock while she duct-taped towels over its mouth, then he and his friend put it to a truck, drove it to a pond, removed the tape and towels, and released it. Oh, and his daughter filmed the whole thing. Rose-Ann Aragon of Houston NBC affiliate KPRC has more on that, including some footage from that video:

Aragon’s story has some great quotes from Trinh, too:

“So she runs back [and says], ‘Dad! There’s an alligator in the front door!’ I’m thinking she’s joking… not wanting to go to school. I say, ‘Just stop! We’re going to school today. Just stop.”

…Watching hours and hours of the iconic wildlife expert, nicknamed “The Crocodile Hunter,” Trinh said he remembered what Irwin did on the shows.

“You just know you got to put the towel over [the alligator’s] head,” Trinh said. “That’ll calm it down.”

…“First [towel]: missed! Second one: kind of a miss! And you could see [the alligator was angry]—Its mouth was open.”

…” I said, ‘Hey, honey get the tape, and tape it up.’ I was holding his mouth securely so it wouldn’t bite my daughter.”

…“Once we removed the tape. It didn’t do anything. It hissed…I crossed it off the list. I’m going to wrestle an alligator today.”

That is definitely a thing to cross off a list. And Trinh did this a little more safely and a little more effectively than, say, Jeremy Roenick and his “Act first, think later” alligator jump.