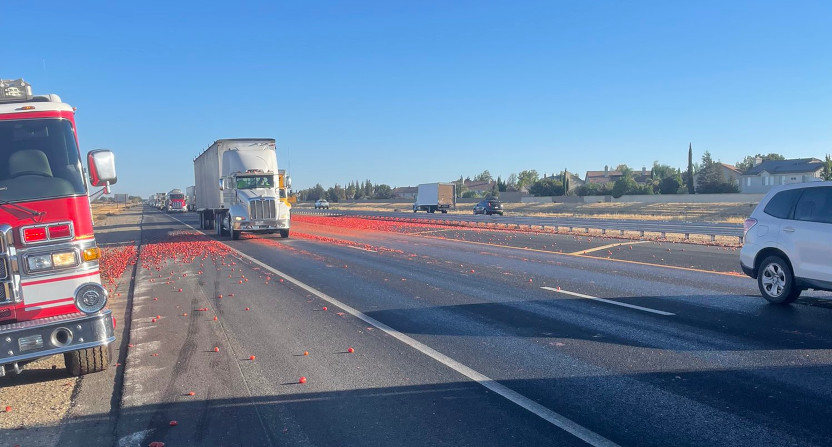 The great California tomato spills are continuing. On Monday, a truck crash on I-80 near Vacaville (around 35 miles southwest of Sacramento) spilled an estimated 50,000 pounds of tomatoes on the freeway. On Friday, a trailer detached from a southbound truck on I-5 in Elk Grove (around 15 miles southeast of Sacramento, and about 50 miles of driving distance from Vacaville), leading to another tomato spill. Here are some looks at that:

At 0750 this morning Cosumnes Fire was dispatched to a reported vehicle accident on I-5 south of Elk Grove. Units arrived to find a commercial truck had dumped its load of tomatoes. There were no reported injuries and the incident is being managed by CHP and CalTrans. pic.twitter.com/PE10Ts1mbY

Tomatoes littering lanes all over SB I-5 between Elk Grove Blvd and Hood Franklin Rd. Sat in traffic for a few minutes on SB 5 on my way here, crews are cleaning up. @ABC10 pic.twitter.com/HMSN0d8z3U

It was the second time in a week that tomatoes covered a section of Sacramento area interstate.https://t.co/QIa4EUHMsZ

Here’s more from that Sacramento Bee story on Friday’s crash, by Michael McGough:

For the second time this week, a truck carrying tomatoes spilled on a Northern California freeway near Sacramento, painting the roadway red and causing delays.

A trailer carrying the fruit detached from a truck around 7:45 a.m. Friday on southbound Interstate 5, south of Elk Grove Boulevard, according to the California Highway Patrol’s online activity log.

Good punning, Bee, good punning. Here’s their video on this as well:

And here are some images of Monday’s crash:

Crews are mopping up tomato sauce along eastbound Interstate 80 in Vacaville, where a big-rig jackknifed in a crash this morning, injuring three people and spilling a load of tomatoes across the freeway. https://t.co/VhsRi8LBGW pic.twitter.com/juaatRHZz0

Here's something you don't see everyday –
CHP says both directions of I-80 are currently closed near Davis Street in Vacaville after a semi-truck hauling tomatoes hit the center median.
Crews have been called in to clean up the mess. pic.twitter.com/YwKFYdOdKN

As many noted, too, this week also saw an alfredo sauce spill in Tennessee. That led to some good jokes:

Yesterday a truck crashed and spilled tomatoes in Vacaville, Calif. Now this. I’d be careful if I was transporting pesto right now. https://t.co/iO1dDYDdT7

We laughed at his warning. pic.twitter.com/xNegzzHbH7

There have been plenty of notable food spills before, from avocados to chicken tenders to assorted meats to vodka. But it’s certainly unusual to see two involving the same food in a week, and for them to be within 50 miles of each other.