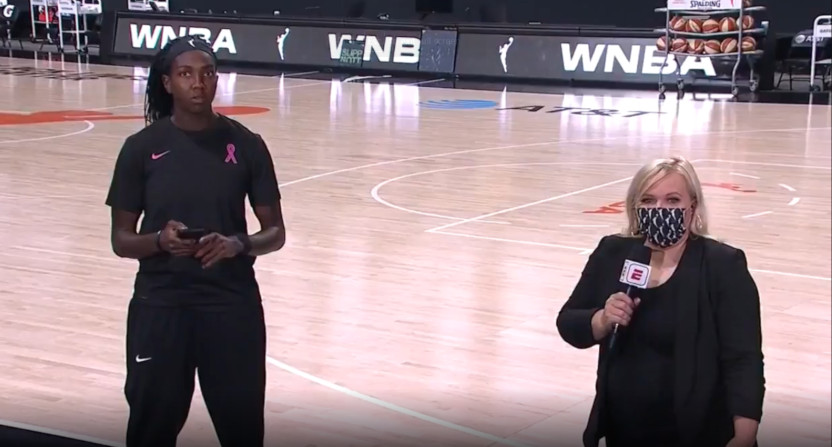 Following postponements in the NBA after teams’ protests (starting with the Milwaukee Bucks) over the police shooting of Jacob Blake, the WNBA also wound up postponing its three scheduled regular-season games Wednesday night after players and teams decided not to play. And that led to the league Twitter account tweeting a video from ESPN2 (which was supposed to carry the Washington Mystics-Atlanta Dream game Wednesday night) of Atlanta Dream forward Elizabeth Williams reading a statement from the league’s players (with an introduction from ESPN’s Holly Rowe):

.@E_Williams_1 of the @AtlantaDream reads a statement as a representative for all WNBA players. pic.twitter.com/Gb0fhYM8T9

Here’s a transcription of the statement Williams read there:

“After speaking with representatives from teams playing tonight as well as our WNBPA leadership, the consensus is to not play in tonight’s slate of games, and to kneel, lock arms, and raise fists during the national anthem. We stand in solidarity with our brothers in the NBA, and we will continue this conversation with our brothers and sisters across all leagues, and look to take collective action.”

“What we have seen over the last few months, and most recently with the brutal police shooting of Jacob Blake, is overwhelming. And while we hurt for Jacob and his community, we also have an opportunity to keep the focus on the issues and demand change. These moments are why it’s important for our fans to stay focused, hear our voices, know our hearts, and connect the dots from what we say to what we do.”

“We encourage everyone to go and register to vote, now, today. If you truly believe that Black Lives Matter, then vote. Go and complete the 2020 census now. Don’t wait. If we wait, we don’t make change. It matters, your voice matters, your vote matters. Do all you can to demand that your leaders stop with the empty words and do something.”

“This is the reason for the 2020 season. It is in our DNA. We have been saying her name, we have been lifting the voices of Black and Brown women whose murders have been forgotten. We will continue to use our platform to speak of these injustices that are still happening and demand action for change. Black Lives Matter. Say Her Name. Say His Name. Tonight, we continue to stand, and while we have heavy hearts, we stand with strong and determined voices, and ask all our fans to vote, to engage, and to make that difference.”

It’s certainly notable to see a statement from a league’s players put together so quickly, and relayed on national TV and then shared by the league itself. But the WNBA already officially dedicated this season to a push for social justice back in July, and their players have consistently been engaged, thoughtful, and outspoken on many of these topics. We’ll see what’s ahead for that league and the remainder of its season, which is set to run through Sept. 14 and then be followed by playoffs.