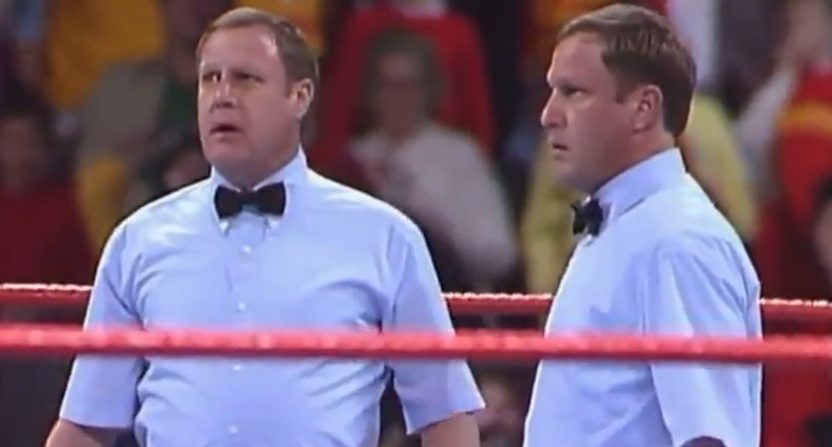 Professional wrestling fans around the world are mourning the death of longtime referee, Dave Hebner.

Fellow referee Brian Hebner, Hebner’s nephew, tweeted that his uncle had passed away on Friday at the age of 73.

Joseph Currier of F4wonline.com noted that “Hebner had been battling serious health issues in recent years, including dementia and Parkinson’s disease.”

Former NASCAR driver Hermie Sadler had recently visited with Hebner and asked everyone to send “some positive vibes” to the Hebner family.

I’ve said many times that friendships and relationships are very important to me. Took the time today to go visit Dave Hebner. The Hebner family is so special to my family. Join me in sending some positive vibes his way !! @BrianRDJames @WWEArmstrong @RealJeffJarrett @WWE pic.twitter.com/G8SHrs9jqa

RIP Dave Hebner. Being at the center of one of the biggest angles of all time, in front of 33 million on NBC, is a hell of an accomplishment for a referee. pic.twitter.com/6EZDEmacaP

That event was also the most-watched in wrestling history, as it drew (per cagematch.net) a record-shattering 15.2 rating.

Many wrestlers and others in the wrestling world sent their condolences to Hebner and his loved ones after news of his passing broke.

I'm sad to learn of Dave Hebner's passing. He & his brother Earl are two of the nicest people I've ever crossed paths with in Pro Wrestling. #RIPDaveHebner

RIP Dave Hebner, you were always kind to me. All my best to the Hebner family. ❤️

So sad to hear the passing of the great and legendary Dave Hebner. Certainly one of the nicest people I met in this business. #RIPDave #wrestling #hebner https://t.co/9RJ1U7h5xM

Inside The Ropes would like to wish our deepest condolences to the family of the WWF Legend.

Damn, so sad to hear about Dave Hebner. Probably the best referee of all time and most watched referee of all time. He was involved in the aftermath of the Hulk – Andre "Main Event" match that did more viewers than any other in U.S. history

One of the most iconic wrestling angles from the 80’s.

Although I told you every time I saw you I still can’t thank you enough for all that you have done for my family & I. I wouldn’t be where I am today without you. Thank you, for everything.

I love you Dave ❤️ pic.twitter.com/LiNyFbrjG0

Sad to hear Dave Hebner, the twin brother of referee Earl Hebner and longtime referee and road agent, has sadly passed away

Sad news about Dave Hebner been friends since 1970 when he and baby Earl were setting up the ring. Had much respect for the Hebner’s. They were part of the company biggest angle both are deserving to @WWE HOF. RipHeb

Hebner worked with WWE until 2005, when he was released. He later worked with Total Nonstop Action Wrestling (now IMPACT Wrestling) and more recently with MMWA Wrestling.