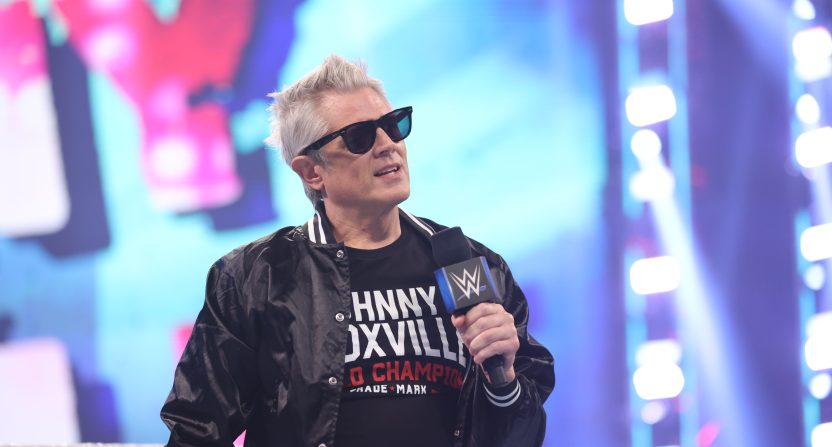 Johnny Knoxville may have originally come to WWE to promote Jackass: Forever, but when he got into the world of sports entertainment, he encountered a much more personal foe.

Sami Zayn has been a thorn in Knoxville’s side since the beginning, and he has had enough. That’s why the two will be facing each other in an Anything Goes match on night two of WrestleMania (April 2 and 3 starting at 7:00 PM ET on Peacock). While interviewing him for this piece, Johnny was no doubt itching to reveal his true feelings for the guy who has tormented him over the past few months.

Knoxville told The Comeback, “Let’s talk about that low down and dirty Sami Zayn. He will not shut up. He won’t shut his mouth, but I’m going to shut it for him. I’m going to have to… I’m going to kick him in his stupid face.”

There’s a reason why Johnny feels this way.

Days after Knoxville announced his intentions to enter the Royal Rumble, Zayn let him know that he wasn’t qualified to be in the Rumble, and Johnny responded by throwing Sami over the top rope and getting in. Then after Zayn eliminated Knoxville in the Royal Rumble match, Sami refused to end things with him getting the upper hand and crashed the Jackass: Forever premiere later that week.

Zayn posted a Twitter thread telling his side of the story claiming that he was merely enjoying his time in Los Angeles and was set to go to the premiere which Sami had a ticket for. Zayn also noted that Knoxville was the one with the weapon on the red carpet and was trying to use the cattle prod on him as security was leading him away.

Nevertheless, that was the last straw for Johnny.

Regarding what happened at the premiere, Knoxville said, “Yeah, [Zayn] came disrespecting our premiere, and he got what he deserved, and he cries about it afterwards, ‘Oh, I’m going to sue, I was attacked!’ He’s lucky he got away with just that.'”

Knoxville came back to SmackDown a few weeks after the premiere to get revenge at Zayn’s Intercontinental Championship celebration and challenge Zayn to a match at WrestleMania. Sami wound up getting the better of the Jackass star by launching two Helluva Kicks, with the final one putting out Knoxville.

After losing the Intercontinental Championship to Ricochet (thanks to Knoxville), Sami put the Mania challenge to Johnny, which he accepted. That next week, Zayn found out Knoxville’s phone number and endlessly trolled him. What Sami may not have realized was that it also meant Johnny knew Sami’s phone number, so Johnny rented a plane and had Sami’s number flown all over LA. Since then, Zayn has been receiving a deluge of calls and texts as he refuses to change his number and let Johnny win.

Knoxville is best known for being the head of the Jackass franchise that has spanned for over 20 years. A show that started with a bunch of guys getting into wild and crazy stunts has turned into movies (one of which was nominated for an Academy Award), specials, and video games. Knoxville was humble in discussing the show’s origins and the path the franchise has taken ever since.

While he might’ve made his name in Hollywood, it’s apparent that Johnny made a name for himself on his own terms. Even before Jackass became the mainstay it is, Knoxville turned down a weekly spot on Saturday Night Live in favor of filming the Jackass pilot. That decision might’ve been unthinkable to most people if they’re looking to make it big in show business, but Knoxville bet on himself and his friends. And that not only paid off tremendously, but Knoxville even got to host SNL in 2005.

“I was very lucky that Lorne Michaels offered me a few minutes on SNL to do my thing every week, “Knoxville said. “But at that time we’re getting ready to do the pilot for Jackass and it was either going to a show where I have no control or bet on me and my friends where we had all the control. And that’s what it came down to. But I mean, love Lorne Michaels. It was an honor to be offered.”

Nowadays, Jackass has resulted in an entertaining half-billion-dollar franchise but has never lost its spontaneity after all these years. The crew’s process in making content is writing bits where “we try to make each other laugh” and “shoot when we feel like it.” It’s a more natural creative process, as they try not to be tied down to writing skits for the purpose of making a movie and instead letting it come to them and writing skits whenever they feel like it.”

Knoxville added, “I like how we do it. We only shoot when we feel it. It means more to me that way.”

“[Beating up Sami is] all I think about,” Knoxville said. “Like I’m obsessed with it. I’ve become obsessed with it. And just, I can’t wait to get my hands on him in the ring… I’m committed, and I’m here to do my job and it’s not just some promotion. Like, I’m done promoting; I just want to kick Sami Zayn’s ass.”

Maybe Zayn had a point to question Knoxville’s motives at first, but Sami’s flaw is that he failed to look deeper into who Johnny Knoxville is. All Sami sees is a Hollywood star looking to use WWE to further promote his own projects, but Johnny isn’t your average Hollywood star. And Zayn may very well learn the hard way that you don’t judge a book by its cover at WrestleMania.

Asked if he had any last words for Sami in the lead up to WrestleMania, Knoxville bluntly responded: