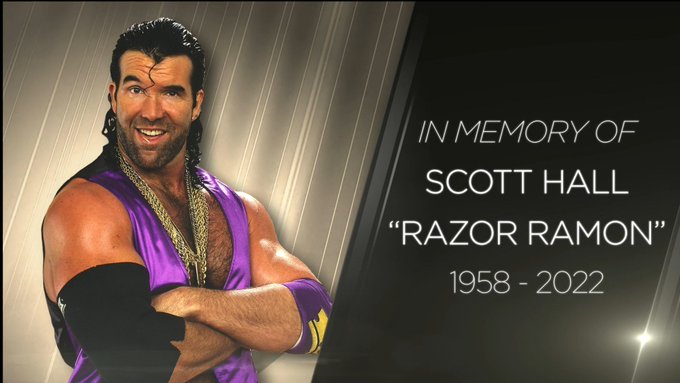 Scott Hall, one of the most important and impactful professional wrestlers in the history of the business, passed away on Monday.

On Sunday, Wade Keller of PWTorch.com reported that Hall was on life support after suffering three heart attacks following complications with hip replacement surgery. Later, Hall’s on and off-screen friend, Kevin Nash, posted on Instagram that Hall would be taken off of life support as soon as his family was in place. That happened on Monday and not long after, WWE announced that Hall had died.

WWE is saddened to learn that two-time WWE Hall of Famer Scott Hall has passed away.

Hall was a star in multiple places. As Razor Ramon in the WWE (then WWF), he was a four-time intercontintental champion. In 1996, he went to WCW and became the first member of the New World Order. The NWO storyline was a financial goldmine for WCW, and it eventually caused WWF to respond with the Attitude Era. With that, the wrestling boom of the late-1990s and early-2000s was born.

Following his death, tributes from the wrestling world came pouring in.

I love you Scott!!
I’ll see you down the road…#BuddySystem pic.twitter.com/Qx2he0TetS

In ‘89 I spent 5 weeks in Germany with Scott Hall.We got https://t.co/MdtZiywC24’91 I was on a try out for 1 day for WCW in the UK and,although he would never admit it,got me kept on the 5 day https://t.co/hkV2qYfTxg deepest condolence to Scotts https://t.co/rlDYlkMbNs well pal.

Saddened to hear about Scott Hall’s passing. The Bad Guy was always great to my brother & I. My thoughts go out to his family & loved ones. #RIPScottHall pic.twitter.com/cOxea6DvWF

So many prayers for Scott Hall and his family right now. The wrestling community is a very strong family and near or far, we have each others backs. Times like these are never easy but I do know there are so many incredible people waiting for you on the other side, ‘Bad Guy.’ 💜 pic.twitter.com/KGTpWR44BR

Of course, there’s another part of Hall’s legacy that can’t be forgotten. Throughout his career, Hall struggled with substance abuse issues.

With the help of fellow former wrestlers Diamond Dallas Page and Jake Roberts, Hall began to get sober. A call between the three from early 2013 shows just how dire Hall’s situation was at the time. While Hall’s passing at 63 is still young, the fact that he lived as long as he did was an inspiration that others remembered upon news of his passing.

Goodbye my brother. Scott now you have peace!! R.I.P.

I got to meet Scott Hall in the summer of 2019. The man was able to overcome so many demons late in his life. I’m glad he was able to know what a big impact he had on the fans and his colleagues. #badguyforever #TwoSweet pic.twitter.com/iXzTplNgR1

Really unfortunate to see the passing of Scott Hall. He had overcome so much and worked so hard to clean himself up. His impact on the professional wrestling business is massive. He was a huge star when wrestling was a huge deal. Rest in Peace to The Bad Guy pic.twitter.com/HQ5Yekioy2

Scott Hall's death is tragic, but his redemption story is his defining legacy.

This story could have ended more than a decade ago. But with the right people around him, he didn't let it.

Indeed. Hall’s life may have come to an end on Monday, but he’ll be remembered for years to come.