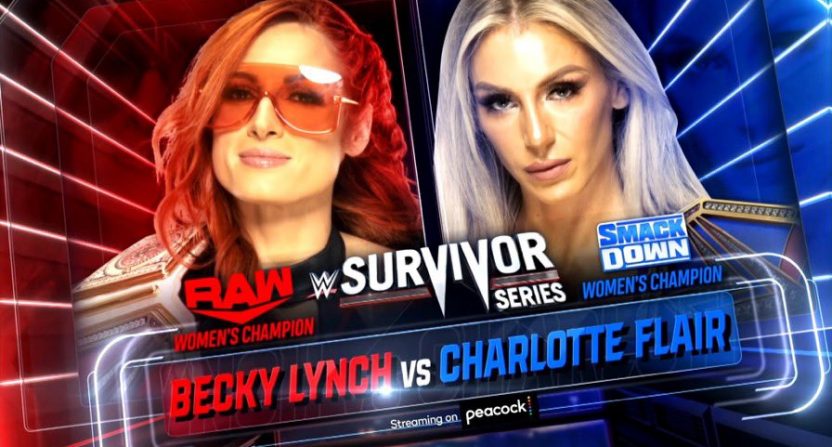 Survivor Series is this Sunday (Nov. 21) and there ‘s one match that the WWE Universe is buzzing about. The seemingly real feud between Becky Lynch and Charlotte Flair has captivated fans as it has played out over WWE programming, in interviews and the dirtsheets, and on social media.

To summarize their feud up to this point, when Becky and Charlotte were drafted to WWE’s other brand, the two champions had to exchange titles on SmackDown. During the scene, Flair pulled the Raw Women’s Championship as Lynch was about to grab it and let it drop to the mat.

The rumor was that Charlotte didn’t want to look weak and her off-script move was to make sure that didn’t happen. Becky reportedly felt disrespected and there was a backstage confrontation afterwards. Flair was then asked to leave and was escorted out by a WWE official. Since then, Charlotte and Becky have both fired some stiff shots that may or may not be what they actually think of the situation.

In the lead-up to Sunday’s match, Lynch opened up on the SI Media Podcast saying she and Flair “don’t talk anymore” and seemingly insinuated that she stood up to Charlotte saying she’s “all right being that hero” in the locker room. Becky went to further explain that it’s “100% more difficult” to have a match with an opponent you have real life heat with.

On this week's SI MEDIA PODCAST, I asked WWE superstar Becky Lynch about a recent backstage incident with Charlotte Flair and their real-life heat. Lynch did not pull any punches. https://t.co/A6BAlsrEmO pic.twitter.com/zo8zFwyWLT

In interviews, Flair didn’t necessarily target Lynch as much as she took issue to the overall perception that she’s been “difficult” in the locker room.

Flair explained that she’s merely standing up for herself and for what she believes in, and that if she were a man she’d “have big balls” to act like that. But because she’s a woman, she’s labeled as “difficult.”

No one on our roster acts like this, man or woman. Gender ain’t the issue here. https://t.co/YtbiZLVvrr

Lynch took to Twitter to disagree with that assessment. Even Ric Flair has gotten into the mix, criticizing Lynch after she responded to his comments about her and metaphorically took back “The Man” moniker for himself.

Along with what’s being said during SmackDown and Raw for the past couple of weeks, these two wrestlers are setting up a highly anticipated match.

I honestly don’t know what’s real and what’s not with this storyline, but it’s set up in such a way that I honestly don’t care which is which. We fans have become so accustomed trying not to look like idiots and avoid being fooled into thinking something is real when it’s actually a work, that it sometimes takes away from the story that’s being told. If I’m being worked, then I’m fine with getting worked when the storyline is as compelling as this.

The reality-based storyline that Becky and Charlotte are telling is something that WWE should do more often. This isn’t to say WWE should try to force something real into every storyline, because that can go bad very quickly.

But if WWE can play its cards right and insert a bit of realism at the right moment, it can be an effective strategy to raise interest and stakes in a storyline. Especially when some of the other Survivor Series matches don’t have nearly the same amount of intrigue as this.

There are countless examples of WWE inserting realism into a story to raise interest. The Monday Night War, the Montreal Screwjob, the Summer of Punk, and the Edge/Lita/Matt Hardy love triangle are just a few of many examples throughout the years. Realism equals money, and that’s what Becky and Charlotte bring, as long as they’re able to work with each other.

But even that makes things intriguing. Can Flair and Lynch work in the ring? Will one sabotage the other? An argument can be made that this storyline is less about who wins or loses, and more about whether or not they can actually work together to have a great match. It works on so many levels.

If this match goes the way some believe it will, the Becky Lynch-Charlotte Flair feud will continue after Survivor Series. If it continues, and it probably will, it will be somewhat difficult to keep up the feud with Lynch on Raw and Flair on SmackDown. But if they can keep the heat going on social media and in interviews, this can be money for the foreseeable future.