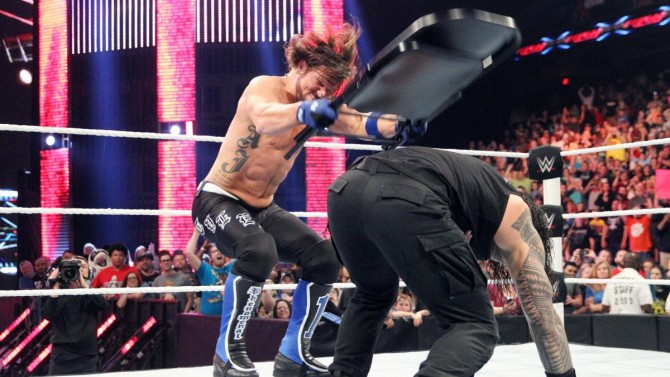 The WWE Title feud between champion Roman Reigns and challenger AJ Styles has been the best part of WWE programming over the last month. Things got even better this week, as Styles left the WWE Champion lying face-first on a chair following a devastating Styles Clash.

Two weeks ago on Raw, Reigns drove Styles through a table. When was Styles going to retaliate in a big way? It didn’t happen last week, but then Styles took advantage of a situation this week.

Following The Usos’ victory over Luke Gallows and Karl Anderson, all hell broke loose as the fight continued after the match. Reigns was there to support his cousins, The Usos, while Styles was in the corner of G&A because they’re part of a group called The Club.

Styles went face-to-face with Reigns. Gallows hit Reigns in the back. Anderson had a chair that he wasn’t able to use. Then the tag teams started brawling. Styles had a chair at his feet and after AJ said previously that he would use a chair, that’s what he did. Once again, he was able to use it only after Gallows and Anderson provided a distraction.

Styles nailed Reigns in the ribs with the chair. Then he hit him in the back three times. Remember, no more chair shots to the head in WWE. With Reigns in a defenseless position, Styles capitalized with the dreaded Styles Clash on Reigns, on the chair. It was Roman’s chest that hit the chair. It looked devastating.

The crowd loved seeing Styles get his revenge on Reigns, because Reigns is hated by a lot of WWE fans for the way that he has been shoved down our throats. Personally, I don’t mind the guy at all. Reigns works hard, he’s improved in all areas over the past couple of years, and I think a lot of the hate is unwarranted. Fans may hate his position, but do they hate him as a performer? I’m not sure.

As for Styles, he’s fit in very well in WWE in just five months of being there. The fact that he’s getting his second WWE Title match this month is pretty awesome. That doesn’t mean he’s going to win the WWE Title on Sunday, but he has shown that he belongs. There’s no denying it. Styles is arguably the best all around performer in WWE right now. He’s earned the position he’s in, and it’s no surprise that he is thriving.

This has been the best WWE Title feud since Seth Rollins vs. Dean Ambrose around this time last year. It feels like an intense rivalry with so much on the line because of what the gold means to Reigns and what it would mean for Styles to win it. Extreme Rules should be awesome, thanks in large part to the job that these guys have done in making their WWE Title match extra special.

Is the entire WWE product hot right now? No, but the WWE Title picture is great and that’s something all WWE fans should be happy about, whether you like the champion or not.

Here’s a rundown of this week’s matches on Raw, with quick notes on each.

It was supposed to be Zayn vs. Cesaro, but they only went about one minute before Owens and Miz started brawling around ringside. Stephanie McMahon made this unique tag match. It was very entertaining to see Owens teaming with his rival Zayn. Instead of those two having major problems, Miz attacked Cesaro, then Cesaro dropped Miz with the Skull Crushing Finale (the finisher of The Miz), and Zayn capitalized with the Helluva Kick on Miz to win. This IC Title feud has been really entertaining in the last month.

This was just a quick win for Primo and Epico in their WWE return with this new “Shining Stars” gimmick. Basic stuff here. The opponents were local guys that are not regulars.

Since Brooke beat Lynch on Smackdown (thanks to Emma’s help), the assumption here was that Lynch would win. Nope. Brooke actually won clean by sitting on top of Lynch for the pin. Good start for Brooke on the main roster with two wins in her first two televised matches.

Those team names are legit. No lie. It was a win for Brezango after Truth accidentally kicked Goldust in the head. The idea is that this was the first time Golden Truth teamed up and they made a costly mistake. In a backstage segment that followed, it sounded like this match will happen again soon.

In a match that felt repetitive after the last few weeks, The Usos were able to win clean. That was a bit of a surprise because I didn’t think WWE would book G&A to lose convincingly like that. It was an entertaining match, though. The post match stuff was great, which I covered earlier.

Big Cass is a guy that WWE really likes because he’s seven feet tall — and you can’t teach that. That’s why he beat D-Von in less than two minutes. Still no word on when Cass’ partner Enzo Amore may be back from a concussion.

They got a decent amount of time from a match that wasn’t for Kalisto’s US Title. Rusev beat up Kalisto’s partner Sin Cara, brought him out to ringside, and that distracted Kalisto enough for Del Rio to hit a Backstabber for the win. Post-match, Rusev attacked Kalisto with the Accolade submission move.

The show was main evented by a contract signing for the Women’s Title match at Extreme Rules featuring Charlotte and Natalya.

1. It was interesting that WWE would main event the show with a contract signing for Charlotte’s WWE Women’s Title defense against Natalya at Extreme Rules. Two weeks ago, WWE announced it would be a Submission Match. So why do a contract signing if the match was already announced? It’s because WWE wanted to use the time to add a stipulation that if Ric Flair appears at ringside during the match, then Charlotte will lose the Women’s Title.

The segment felt like it was about Stephanie McMahon more than anybody. Flair criticized her for being a terrible businesswoman due to the stipulation she added with her brother Shane. She responded to the insult by slapping Flair. It was about making her more likable for this face turn she’s doing, which could end up with heelish behavior. It felt more like this was a signing for Stephanie vs. Flair, instead of the two women actually in the match.

The whole thing ended with Natalya putting Charlotte in the Sharpshooter, but it’s not like they let Natalya speak a lot. It always has to be about the McMahons, it seems.

2. Dean Ambrose challenged Chris Jericho to a match at Extreme Rules, with Ambrose claiming he got permission from Shane McMahon to pick the stipulation. Ambrose ended up going with an Asylum Match, which is a black steel cage with items hanging on top of the cage that can be used as weapons. They had some silly items up there, but there were also legit weapons like a barb wire baseball bat. It should be one of the most physical matches at Extreme Rules on Sunday.

Ambrose and Jericho have done a great job in building up this rivalry. The main purpose for it is to elevate Ambrose to that main event level by having him work with one of the best wrestlers ever in Jericho. It’s working because they are bringing out Ambrose’s crazy side more and more every week. Jericho can lose every match the rest of his career and he’ll still get big reactions. He doesn’t care about putting people over. That’s why this feud has worked so well.

3. The Shining Stars “debuted” on Raw this week. It was Primo and Epico, who you might remember as Primo and Epico Colon — aka the former Tag Team Champions a few years ago. They were also Diego and Fernando, aka Los Matadores, which was a comedy tag team paired with a little wrestler named El Torito who dressed like a bull. WWE re-packaged them, aired these “Shining Stars” vignettes for weeks with them talking about how great Puerto Rico is, and had them beat two local wrestlers in two minutes.

This is the best that WWE could do? It was weak. They even did a finishing move (a leg sweep/high kick combo) that they named The Shining Star. WWE employs over 20 writers on their “creative team” and that’s the best name they can come up with for the move? They had over a month to figure this out. I know it’s early and they have plenty of time to work on these gimmicks, but it needs to get better soon or else it’s not going to work.

As wrestlers, Primo and Epico are pretty good. It just seems like WWE can’t find the right gimmick for them, even when they try. I feel bad for the performers more than anything.

Looking Ahead To WWE Extreme Rules 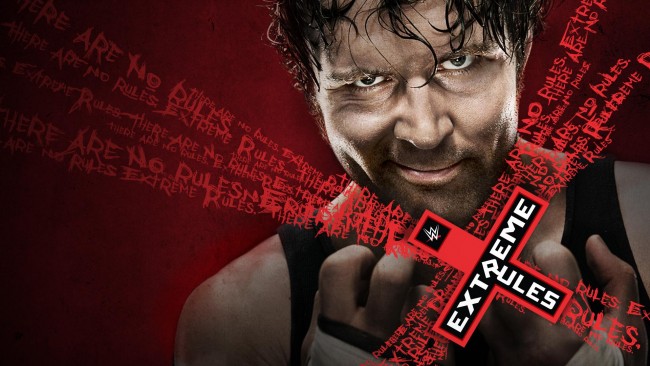 The WWE Extreme Rules event takes place on Sunday, May 22 in Newark, New Jersey. It should be a very good show with this lineup.

Fatal 4 Way for the WWE Intercontinental Title: The Miz vs. Cesaro vs. Sami Zayn vs. Kevin Owens

Submission Match for the WWE Women’s Title: Charlotte vs. Natalya (Ric Flair is banned from ringside)

No Disqualification Match on the Kickoff Show: Dolph Ziggler vs. Baron Corbin

There might be more matches added on Smackdown, such as Brooke vs. Lynch or possibly Goldust/Truth vs. Fandango/Breeze again. Don’t rule out a match for Big Cass or Apollo Crews either.

Any time there’s a “go home” show, it usually follows the same pattern as WWE tries to drive home their points leading into Sunday’s Extreme Rules show. There are usually a lot of promos, short matches and finishes that leave you scratching your head, wondering what’s going on.

What the last Raw before a PPV is supposed to do is get you more excited about Sunday’s matches. I’m not sure if they did a good job of that for every match on that show, but for the WWE Title and IC Title matches, my interest is high. For some people, that’s enough.

Later this week, I’ll be back with an Extreme Rules preview while also providing WWE with several fantasy booking scenarios that they can use for the finish. See ya then.