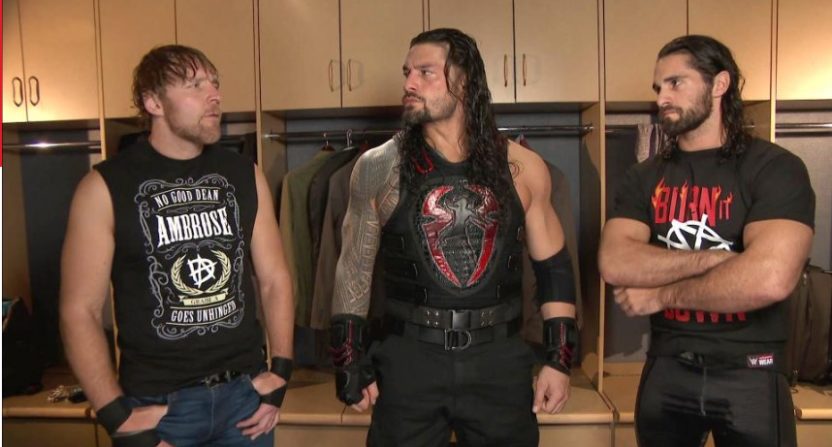 The road to WWE TLC continued this week on Raw with the return of The Shield being teased in the main event. Before that, though, all three Shield members were beat down by some bad guys because that’s how things work in WWE. Nothing is ever easy, after all.

Monday’s Raw began with the roster standing on the ramp, holding a moment of silence to honor the lives lost in Las Vegas due to the actions of a lunatic. Vince McMahon, Kurt Angle and Shane McMahon stood together in the middle of the group. It was a horrific incident in Vegas on Sunday night and my condolences go out to all of those who lost loved ones.

It was refreshing to start Raw with a match instead of the usual promo. The reason for that is because the Monday Night Football game on ESPN starts 30 minutes after Raw, so WWE wanted to give the fans something interesting to start the show.

Seth Rollins put up a good fight, but Braun Strowman was too much for him. Every time Rollins got going, Strowman was there to cut him off with his power moves. Rollins looked like he couldn’t really do much damage to Braun, although he had a cool sequence with the Blockbuster neckbreaker. It only got a one count, though. When Rollins went for his knee strike finisher, Strowman fought back with a clothesline. Strowman finished off Rollins with a Running Powerslam to win the match in about 10 minutes. The match was fine, but nothing special.

Strowman hit Rollins with another Running Powerslam after the match. Strowman wanted to do more damage, so Dean Ambrose ran out there to make the save. Braun beat him up easily with two Chokeslams and a Running Powerslam. Way to make the Tag Team Champions look like losers.

Sheamus and Cesaro showed up after Strowman left to deliver their finishing moves on both guys because they have had issues with Ambrose and Rollins.

This was a good match and the best of the night. Miz got a lot of offense in. I thought that maybe Reigns would be booked so strong that Miz would be booked like a loser, but Miz was booked well. At one point, Miz hit a Skull Crushing Finale on Reigns and Reigns kicked out at two. Reigns came back with a Superman Punch that Miz kicked out of, which isn’t a major shock since everybody kicks out of the Superman Punch. With Reigns set to finish off Miz, Reigns was pulled out of the ring by Sheamus and Cesaro. That led to the disqualification win for Reigns.

Following the match, the three heels beat down Reigns as they all hit their finishing moves on him. The heels also did a three-man Powerbomb like The Shield did many times before. Miz, Cesaro and Sheamus did the Shield three-man fist pose in the ring over a fallen Reigns.

There was no sign of Ambrose and Rollins to save Reigns because they were beaten up earlier in the night.

The Shield trio reunited in a backstage segment

The last 90 seconds of Raw saw Roman Reigns sitting in the locker room selling the beating he took earlier. Dean Ambrose showed up on his right side. Reigns just stared at him. Seth Rollins sauntered in on Roman’s left side as the crowd cheered wildly for the three former Shield members standing together. It’s what the fans have wanted for a long time. All three guys nodded at each other as if to say they were going to reunite, but didn’t say a word. Ambrose and Reigns left while Reigns was left alone as Raw ended. Cool moment to end the show.

Next week’s Raw has Miz TV with Miz hosting Sheamus and Cesaro. I assume that will set up the three Shield guys coming together to beat up the heels and set up the six-man tag.

It’s expected that Roman Reigns, Seth Rollins and Dean Ambrose will team up as The Shield against The Miz, Cesaro and Sheamus at TLC. I assume that will be a TLC match since that’s the name of the show and the first Shield match in WWE five years ago was a TLC match. Maybe Braun Strowman will be added to the heel side to make it 4-on-3. I don’t know what else he might be doing at the show.

Putting The Shield together is a good way to create something special while the Universal Champion Brock Lesnar sits at home. It also helps Roman Reigns because he’ll get cheered a lot while he’s with Seth and Dean.

Here are the other matches from this week’s Raw.

It was a quick match to put over Elias clean just like when he beat Apollo Crews last week. Bad match. I’m not sure why WWE books Titus and Crews so badly when the people like them. They would make a great tag team, yet this “Titus Worldwide” thing makes them look like a joke.

This match was set up after a backstage segment where Mickie found that somebody put Depends and a walker in her dressing room to push the narrative that she’s old. Mickie tried to get after Alexa Bliss, but Nia Jax stood in the way and Mickie challenged Jax to a match.

They went about 10 minutes with Jax in control for nearly the entire time. When James tried to fight back, Jax stopped her. Jax is still very limited in what she can do in the ring. It was boring watching her on offense. James hit a sweet Tornado DDT out of the corner that Jax sold like she was knocked out or something close to that. Alexa Bliss, who was at ringside, jumped in the ring to attack James. That led to Mickie tossing Bliss out of the ring and decking her with a hard kick, so Mickie was left standing tall.

I liked the story of the match with Mickie standing tall because that’s what she needs to do in order to be a contender for the title. This is one of those instances where the story is more important than the match. Good story and bad match.

Later in the show, Raw GM Kurt Angle told Mickie that due to her DQ win earlier and her history as a six-time Women’s Champion, Mickie will get to challenge Alexa Bliss for the Raw Women’s Championship at TLC. Mickie was excited and said “it’s true, it’s damn true.” That should be a good match. I’d love to see a title change, but I think Bliss will retain. I’m just happy Mickie is involved in the storylines.

It was a standard tag match with the heels working on Jordan for most of it, Matt got the hot tag and the heels managed to win by sending Jordan into the barricade. The Magic Killer double team move won it for Gallows & Anderson, which gives them some much needed momentum.

This was the second week in a row where Banks and Bayley teamed up to beat Emma and a partner. This week, it was Alicia Fox while last week it was Nia Jax. They got 13 minutes, which felt like way too long considering the crowd didn’t react to much at all.

The finish saw Emma walk away when Fox tried to tag her in and Bayley hit a Bayley to Belly suplex on Fox to win for her team. I don’t think anybody cared. I sure didn’t. Can we get that Sasha Banks heel turn soon? She needs it. Bayley needs a new rival too.

Other Key Items From Raw

Enzo Amore got to main event Raw for the second week in a row. What a weird spot WWE is in right now when this guy gets to main event with long-winded promos while he has poor matches. Anyway, Enzo mentioned how the cruiserweights beat him up last week, so none of them get a Cruiserweight Title match against him per a contract he had last week.

That led to Neville and the other cruiserweights to face off with Enzo in the ring. Enzo went up to each guy individually and ripped on them. This part was entertaining because he had some funny lines in there.

Raw GM Kurt Angle showed up to announce that Enzo doesn’t have to face any of those guys, but he had somebody else… Kalisto. That led to Kalisto coming out to a mild pop and he hit his Salida del Sol finisher on Enzo.

Kalisto should have been in the cruiserweight division for the last year instead of doing nothing. At least WWE has found something for him to do as the likely next contender for the Cruiserweight Championship.

2. Bray Wyatt is not done with Finn Balor

Finn Balor did a promo talking trash about Bray Wyatt and called him a coward. Balor mentioned beating Wyatt at SummerSlam as The Demon and at No Mercy as the man. That’s true, so why is this feud going on? Wyatt did a promo saying that Sister Abigail is alive. The scene ended with Wyatt’s body looking all distorted while a woman’s laugh was heard, so that would suggest that it was Sister Abigail laughing too.

What this could mean is that we’ll finally get to see Sister Abigail and maybe she costs Balor the win in a match against Wyatt.

Looking Ahead to WWE TLC

The next Raw brand WWE pay-per-view is TLC on Oct. 22. Only one match has been announced so far.

The likely main event is The Shield trio reunited in a six-man tag match.

As mentioned last week, Universal Champion Brock Lesnar and John Cena are not scheduled for the show.

It felt like an another average Raw with only the Miz-Reigns match standing out as good and I enjoyed the post-match angle a lot. Booking Rollins and Ambrose the way they did was done to give them sympathy, but I also think it hurt them. Watching Enzo Amore doing promos in the main event for the second week does not represent an exciting WWE product. It tells fans that the roster is hurting in terms of star power.

I won’t have a Smackdown review this week or a Hell in a Cell review next week because I’m going on my first vacation this year. I’m heading to a friend’s wedding in Houston for some fun and some relaxation hopefully. I will be back next Monday, so I should be fine for Raw. I will have a Hell in a Cell preview later in the week.