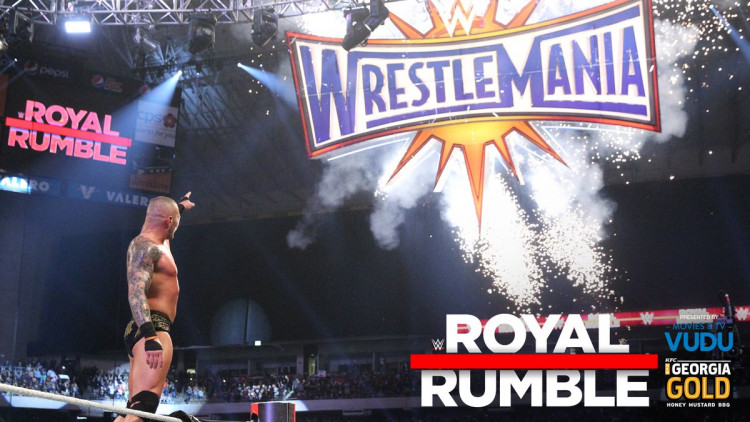 It was a good Rumble for the most part with a slow first half, but it picked up late with big names like Brock Lesnar, Bill Goldberg, The Undertaker and Roman Reigns getting four of the last five spots in the match.

The win by Orton was first reported by the Wrestling Observer Newsletter last week with Dave Meltzer noting that Orton was the plan, but that it could be changed after being mentioned. Instead, WWE went with their plan to give Orton the second Rumble win of his career.

Orton first won the Rumble in 2009 when he was in a heel. These days, he’s more of a tweener because he’s aligned with a heel in Bray Wyatt, but he gets cheered a lot because the fans love his RKO finishing move so much.

When Roman Reigns entered at No. 30, the crowd booed him heavily. Heading into the match, there were 22 names announced for it, so Reigns was one of the unlisted. Normally, guys in title matches earlier in the show aren’t in the Rumble, but Reigns was there for a reason.

After The Undertaker did a Chokeslam to Chris Jericho and a throat slash gesture, Reigns dumped him out. The crowd hated that. They booed heavily. Undertaker sat up on the floor and had a long staredown with Reigns. The rumor is that Reigns will face Undertaker at WrestleMania, so this match was used to set that up.

That’s why Reigns was in the Rumble. Fans that hate Reigns are busy whining about it, but if you stop to think about it, the whole thing makes a lot of sense if that’s the direction WWE is going in.

The final three came down to Orton, Reigns and Wyatt. Orton worked well with Wyatt throughout the match with no sign of dissention between them. Reigns fought them both off with a Superman Punch for each guy and he threw Wyatt out. Reigns set up for a Spear on Orton, he charged in and Orton dropped him with a RKO instead. The crowd loved that. When Reigns got back up, Orton hit a clothesline to send Reigns out of the ring and Orton got the win.

Goldberg had a much-anticipated confrontation with Brock Lesnar as well. It was their first time in a match together since Goldberg beat Lesnar at Survivor Series in under two minutes. Lesnar was in the ring first. Goldberg entered the match with the crowd chanting his name. Lesnar went for a clothesline, Goldberg ducked it, ran the ropes and hit a Spear. Goldberg gave Lesnar a clothesline to knock him out. Shortly after that, Undertaker dumped Goldberg out after Goldberg eliminated Luke Harper. Lesnar was in the match for 4:30 while Goldberg was in there for 3:20. Good pay for such little work, huh?

Chris Jericho was the ironman of the match. He was the second entrant in the match with Big Cass in at the No. 1 spot. That meant that Enzo Amore could join Cass to hype them up for the Rumble match. Jericho lasted 60:13 in the match and made it all the way to the final four. It’s impressive for the 46-year-old Jericho, but if you watched the match, then you know Jericho spent about half of it outside the ring or hiding in the corners. At least he got two eliminations when he dumped Cesaro and Sheamus at the same time.

My pick for the Rumble win was Braun Strowman. I thought this might be an opportunity for WWE to put over somebody relatively new as a Rumble. Nope. They went with a guy who’s already been a 12-time World Champion and main eventer for over a decade. Is it the right call? Maybe.

I’m not mad about Strowman’s lack of a win. It’s not that I’m a big Strowman fan. I just thought based on the push he’s received that he might win. Strowman was given a big role in the match since he dominated the first half with seven eliminations, which was the most in the match. He was eliminated by Baron Corbin with a clothesline. I thought it would have made more sense to have a face do it, but they went with Corbin instead.

There was no sign of Samoa Joe or Finn Balor in the match. I was surprised by the lack of Joe. Perhaps they are saving it for television this week or maybe the Elimination Chamber show in two weeks. He’s rumored to face John Cena at WrestleMania, so they could set that up by having him cost Cena the WWE Title in Elimination Chamber. In Balor’s case, he underwent medical testing last week to see if he could return to the ring. Since he wasn’t brought back, I assume he has yet to be cleared by WWE’s doctors following his August shoulder surgery.

There's only ONE Superstar who could enter the #RoyalRumble Match at No. 10…. and that's the PERFECT 10 @WWEDillinger!!! pic.twitter.com/Qh5o5K3URx

Tye Dillinger was the only NXT wrestler who was a part of the Rumble. It made sense to have him as No. 10 since he is the “Perfect Ten” and the crowd chants “ten” for him. It was nice to see him there, but he really didn’t do much in the match. He was dumped out by Strowman. I’m not sure if this means Dillinger is on the main roster full-time now. We should find out on Raw or Smackdown this week.

As is always the case in Rumble matches, there were comedy spots as well. Jack Gallagher used his umbrella as a weapon several times and was launched out of the ring by Mark Henry. James Ellsworth was also there for comedic relief. Strowman eliminated him too. Enzo Amore hyped himself up for a confrontation with Brock Lesnar, but he was dumped easily as well.

Judging from the comments on social media, a lot of fans are most angry about Reigns being in the match. However, as I said earlier, if the plan is Reigns vs. Undertaker at WrestleMania then they needed to push that story in the Rumble and that’s what they did. It’s smart booking.

Orton isn’t a guy who really needed the win, nor has he been booked as a top guy on the Smackdown brand. I can’t even remember the last time he received a major title match on a PPV. It’s been a while, that’s for sure. However, the story with Bray Wyatt is interesting and if it means Wyatt leaves Elimination Chamber as WWE Champion, then I’m all for it.

Here’s a graphic of Rumble match stats courtesy of Wikipedia. The match had a run time of 62:06. 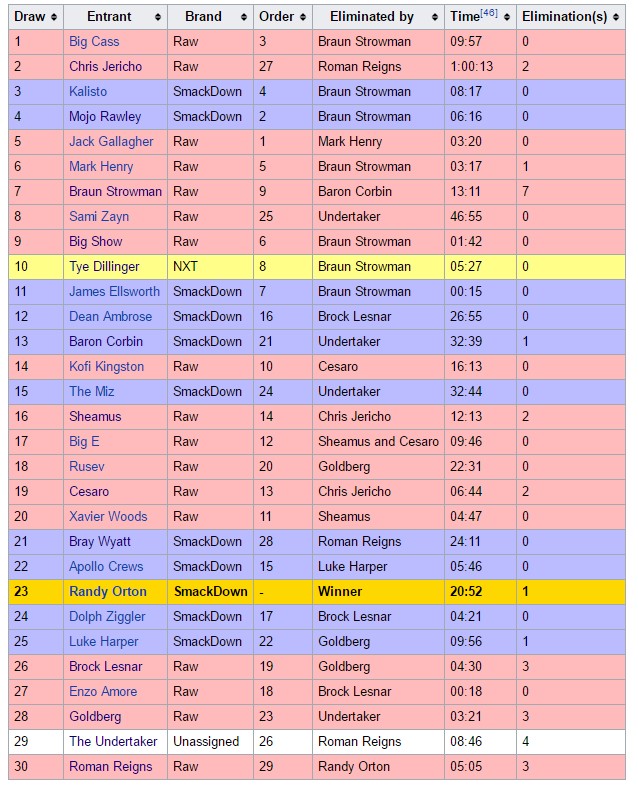 Looking Ahead to WrestleMania 33

With WrestleMania set to take place in April, here’s a look at the rumored lineup (based on information from the Wrestling Observer last week) for the big show two months from now.

Brock Lesnar vs. Goldberg – It seems like a lock. Goldberg is likely going to beat Kevin Owens for the Universal Title at Fastlane on March 5 as well.

Roman Reigns vs. The Undertaker – They set it up at the Royal Rumble. It could be the start of Reigns finally turning heel.

Randy Orton vs. Bray Wyatt for WWE Title – If Wyatt wins the WWE Title at Elimination Chamber on Feb. 12, then they can set that match easily. Orton would likely be the good guy in the match.

Kevin Owens vs. Chris Jericho – As I said, Owens may lose the Universal Title Goldberg at Fastlane, but I don’t know that for sure.

John Cena vs. Samoa Joe – It’s a maybe at this point since Joe isn’t on the main roster yet. I think they could set it up by having Joe cost Cena the WWE Title at Elimination Chamber.

Triple H vs. Seth Rollins – This is also a lock. Neither man appeared on camera during the Royal Rumble event.

Big Show vs. Shaquille O’Neal – It has been expected since last year’s WrestleMania. It should be announced soon.

AJ Styles vs. Shane McMahon – That’s the rumored match at this point because Vince McMahon likely wants to get his son Shane on the show. Can we get Styles vs. Kurt Angle instead? I’d prefer that. Styles vs. Balor would be even better.

Andre the Giant Battle Royal – I think Braun Strowman is the favorite to win that.

Charlotte vs. Sasha Banks vs. Bayley vs. Nia Jax – Bayley could get her big Raw Women’s Title win here.

There could also be a ladder match for the Intercontinental Title, like there has been the last two years. Finn Balor should be back too, so he might be in a featured match as well. There can be a few more matches too because it’s going to be a five- or six-hour show.

I enjoyed the show a lot. I thought it was the best Royal Rumble pay-per-view in several years because there have been some disappointing Rumble PPVs of late. The best part of the show was Cena vs. Styles, and I enjoyed Reigns vs. Owens a lot too. The Rumble match itself is still fun to watch even though they didn’t really elevate a “new” star to the top with Orton’s win. As for the rest of the matches, everything was good and nothing felt like a waste of time. I’d rate it at 8 out of 10 on a ten-point scale. I enjoyed it and recommend it to people that may have missed it.

The next WWE pay-per-view event is Smackdown’s Elimination Chamber show in two weeks on Feb. 12. Raw’s next PPV is Fastlane on March 5. I’ll be back tomorrow with a review of Raw.