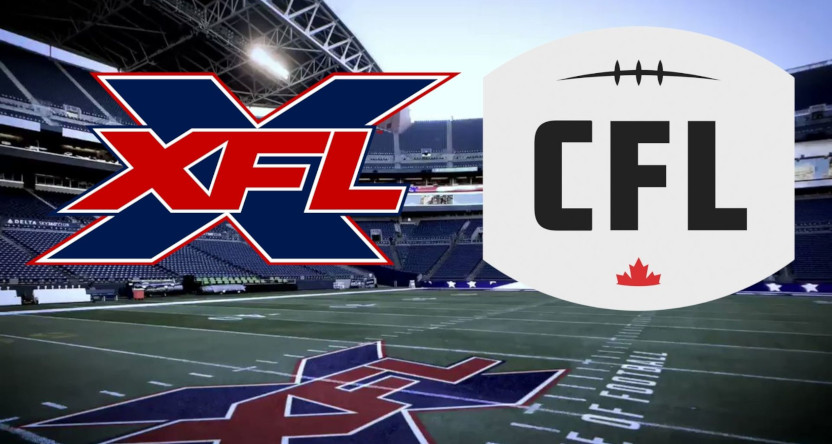 The Canadian Football League (currently an actual entity with teams and players, and one planning to start its 2021 season August 5) and the XFL (currently a collection of intellectual property and trademarks, but with new owners Dany Garcia, Dwayne “The Rock” Johnson, and RedBird Capital and plans to relaunch at some point) announced in March that they were “exploring opportunities for alignment.” That led to a whole lot of talk about what that might lead to, including a merged league. But that’s now not happening, at least for the time being.

Talk of a merger escalated after the XFL said in March they were putting their 2022 season plans “on hold pending the outcome of conversations with the CFL.” And it led to comments from a new “United Football Players Association” group that there was a “merger” coming, and that there was a “strong possibility” the CFL would cancel its 2021 and 2022 seasons as well. Well, the latter didn’t come to pass; the CFL is planning to play this year and next year. And now the idea of a merger any time soon has been also been officially withdrawn, as per a statement from CFL commissioner Randy Ambrosie Wednesday:

“Our talks with the XFL, exploring the potential for collaboration and innovation, have been positive and constructive.

While we remain open to finding new ways to work together in the future, we and our XFL counterparts have jointly decided to not pursue any formal arrangements at this time.

We at the CFL are now squarely focused on preparing for August 5th and the start of our 2021 regular season, which will culminate December 12 with the playing of the 108th Grey Cup in Hamilton, Ontario.

We are looking forward to this year and a bright future for our league.”

The idea of a merged league got a lot of discussion, and there was some potential appeal to it from a few standpoints. Post-AAF, XFL 2.0, and Arena Football League collapse,  the CFL looks to be the most prominent football league outside of the NFL; there are some smaller American leagues still doing things, and there are leagues in other countries, but the CFL is the current big one for players not in the NFL. Maybe the most important element of a CFL-XFL merger might have been that the leagues wouldn’t be competing for players.

Also, a merger with the CFL would have given the new XFL some benefit of history and stability. Yes, the CFL’s had plenty of its own crises over the years, but the 2020 season cancellation over Canadian pandemic restrictions was the only time since the league’s official 1958 formation that a season wasn’t played (and the only time since 1919 that the Grey Cup wasn’t awarded). Meanwhile, a merger with the XFL would have given the CFL a stronger U.S. presence, and in a presumably more durable way than their own CFL USA experience in the 1990s.

However, there were always major questions about the practicality of a merger. For starters, the leagues play different games on differently-sized fields. Beyond that, they have different ownership structures; the CFL’s teams are owned by different individuals and groups, while the XFL (at least in its incarnations to date) has been a single-entity league. The XFL has also played in the spring, while the CFL has played in the summer and fall. And a partnership wouldn’t necessarily have been much of a TV windfall; adding Canadian markets doesn’t help a U.S. broadcast deal, and vice versa.

There have also been plenty of criticisms of even these talks, especially from the Canadian side of the border, with some seeing the CFL’s history and uniqueness as threatened by this. So it’s maybe not surprising that a full merger has not come to pass. And it is positive to see the CFL actually announce that rather than keeping people in suspense about if a merger was still on the table.

Of course, this is just “no formal arrangements at this time,” so that doesn’t mean the XFL and CFL talks are forever over. And there still is a lot these two leagues could potentially do together that’s short of a merger, especially if they keep their current spring and summer/fall timelines. And maybe their conversations so far have been helpful in terms of finding ways to grow the game outside the NFL. But this is certainly a significant announcement that the CFL and XFL aren’t pursuing formal arrangements right now. And it’s one that will draw major sighs of relief from CFL fans who had been concerned about these talks.