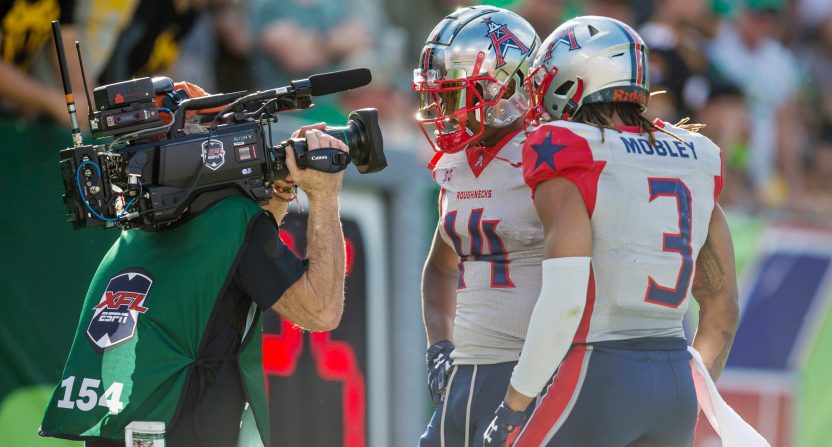 The XFL is dead, long live the XFL.

Just as the original XFL died a quick death only to be reborn 20 years later, we can assume that, at this point, the presumably deceased “new” XFL will also eventually be renewed as the new-new XFL sometime around 2040. The world will look very different by then, perhaps in ways that are being shaped during this very moment, but it doesn’t mean we can’t consider what that version of the XFL might look like. More importantly, if the XFL were to ever return (we’re tentatively coining the term “NeXtFL”), what has it learned in it’s two previous incarnations that could allow it to last for more than one season this time around?

The first XFL touchdown (so long as you don't count all those other XFL touchdowns from 2001). #XFL2020 pic.twitter.com/JOwILQdRs1

Get To The Point

The actual football was, for the most part, better this time around, but viewers made it abundantly clear that they are only willing to stick around so long for mediocrity. As Awful Announcing’s Andrew Bucholtz recently pointed out:

The XFL’s ratings performance also would appear to make it less likely that this league will come back. The ratings started off reasonably strong, but declined and declined and declined from there, with the Week 5 games (the last ones played) drawing 1,547,000, 1,497,000, 833,000 and 767,000 viewers on Fox, ABC, ESPN and FS1 respectively. That’s an average of 1.16 million viewers, a 19 percent drop from Week 4 and a 63 percent drop from Week 1’s average of 3.118 million viewers (with the caveat that three Week 1 games were on broadcast TV, with only one on cable).

Given where this league stands in the pecking order and the talent available, it’s unlikely the league will ever be in a position to offer the same level of play as the NFL, especially in its nascent years. The swift ratings decline was a problem in both versions of the XFL and you can only imagine how bad the ratings would have been for the XFL had it made it to Week 10, especially if two bad teams were playing one another.

So, the solution isn’t to try to add more toys in order to engage viewers longer, the solution is to cut down on the number of weeks in which the decline is happening. In other words, the XFL would want to get away from the traditional idea of a regular season as much as possible. Instead of 10 games, make it 7. Everyone plays everyone once and then the playoffs begin. Not only do you cut down on the viewership hemorrhaging but you can use the short season to goose the value of each existing game.

You could even make the case that the NeXtFL should get rid of the idea of a regular season altogether. Take a page out of the World Cup and just turn the entire “season” into different rounds of qualifying. If we’re sticking to the eight-team model, make two pods of four that play round-robin-style. The top teams advance to a do-or-die playoff and then crown your champion. You could even let the bottom teams duke it out for a chance to get back in.

This may be overthinking it but given the way that viewers check out of these seasons so quickly, there’s really no reason not to get creative in order find out what keeps them interested.

There’s only so much you can control when it comes to the football play, especially if your talent pool isn’t up the level of the NFL. But if this is about survival and trying to make changes for future XFLs that will give them longer staying power, it’s abundantly clear that they need to continue innovating the style of play in order to appeal to a larger audience. And one of the best ways to do that in the game of football is to create more opportunities to score points.

More than anything, boring gameplay did in the original XFL. While the second version was better and certainly featured more scoring, it simply wasn’t enough. The league’s lack of quality quarterbacks really limited the ability of most teams to put a lot of points on the board, especially in a game where it’s often easier for defenses to find their rhythm long before offenses do.

Teams in the new XFL averaged 20.5 points per game. For perspective, 22 of the NFL’s 32 teams averaged more than that last season. While we are talking apples and oranges a bit here, it still stands to reason that the XFL needed teams to score more points. It’s also worth noting that at the midway point of the XFL season, 12 of the 20 games hit the under.

We should note that the new XFL’s change to extra points, eliminating kicks and installing multiple options for offenses to earn more points, was a refreshing change but one that also led to a lot of wonky scores that seemed lower to an audience used to seeing multiples of seven. While a 12-6 XFL game might be relatively similar to a 14-7 NFL game, pro football audiences are trained to see 12-6 as a score that indicates the game isn’t very good. (There’s probably a psychology paper out there that can explain this better than us).

Quite simply, the NeXtFL needs to make it easier for teams to put points on the board. Don’t worry about being fair to defenders. Don’t concern yourself with fairness at all. Just create a system that allows for offenses to score more points. End of story. Obviously you still need those offenses to perform, but whether it’s building in more field position advantage or creating new ways to keep drives alive, the XFL would do itself a big favor by having scenarios that lead to more 40+ point outings. Call it the MACtion Effect.

Match the Talent for the Technique

Both versions of the XFL helped push forward the notions of sideline reporter access during games. Cable cams, locker room interviews, and huddle access are all commonplace in NFL broadcasts these days but have their football roots in the original XFL. The new XFL also went hard on the idea of sideline and locker room access, with varying degrees of success.

The new XFL’s sideline reporting access was a mixed bag all season long. For every interview that was viewer gold, like NY quarterback Matt McGloin throwing his coaches under the bus, there were 4-5 interviews that went nowhere and made for very awkward TV.

Maybe not the best time for an interview opp. #XFL2020 pic.twitter.com/m0JghP3LRf

It seemed as though certain broadcasters and reporters had a knack for understanding what the deal was while others were just constantly trying to capture something even if it wasn’t there. Pat McAfee, for instance, really seemed to understand what his role was from the jump and not only brought viewers into the process but also added just enough WWE-influenced flair to make things interesting.

Someone check on @PatMcAfeeShow after this Marquette King punt 😆@xfl2020 pic.twitter.com/SIvJxCPz1o

It was strange to watch as the XFL season went along that certain networks and sideline reporters didn’t quite seem to be learning how to tell the difference between a moment worth inserting themselves and a moment where the access isn’t worth it. By cutting down on unnecessary sideline interviews in order to focus efforts on the moments, coaches, and players that would give you something interesting, networks would be able to maintain the allure of all this access more.

Having this kind of authentic moment access will ultimately be what the XFL wants to focus on over generic sideline interview sound bites. #XFL2020 pic.twitter.com/mAJffvRQ8I

The same goes for the play-calling access, which lost it’s appeal fairly quickly when most viewers found themselves just listening to a bunch of gibberish that didn’t add much to the experience. One of the big lessons from the second XFL was certainly that all access isn’t interesting. But having the personnel who understand the difference is key to making it work.