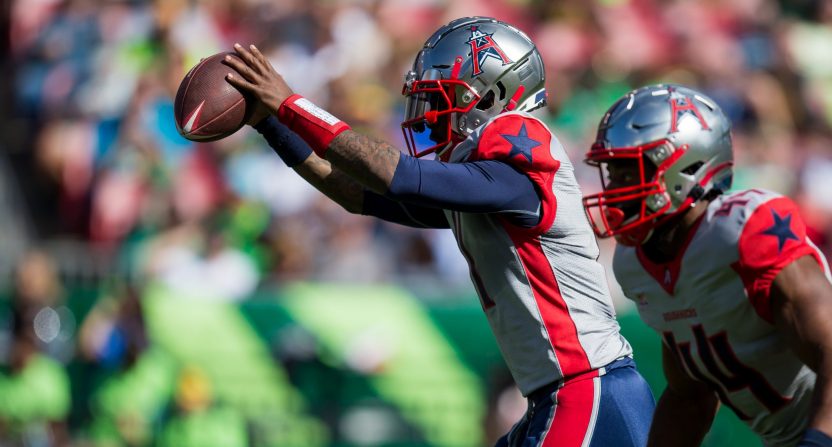 The XFL is dead once more. And although we can hold out hope that it will return again one day, we once again find ourselves with a league that didn’t make it past one season (and didn’t even finish that one, though there were extenuating circumstances).

So what does that leave us with? One version from 2001 that played its entire 10-game regular season plus playoffs. And another version from 2020 that made it five weeks before being shuffled loose the mortal coil. Those aren’t exactly even numbers to pull from, but we can use what we’ve got to make a case for the best players in the entire history of the XFL were, sorted by position.

Some potential controvery right off the bat as Walker absolutely lit up the XFL this year, garnering 1,338 passing yards, 99 rushing yards, and 16 total touchdowns, all while leading the Roughnecks to a 5-0 run before the league shut down. By all accounts, he would have surpassed Maddox’s numbers from the original league (2,186 passing yards and 18 touchdowns). However, credit where credit is due. Not only did Maddox power the Xtreme to an 7-3 record that season but he also led them to the only XFL Championship ever earned.

In both incarnations, the XFL was not exactly a runner’s league. Everyone remembers Rod “He Hate Me” Smart more for his jersey and less for what he accomplished on the field (3.8 YPC, 555 yards total, five touchdowns). Some of the other RBs who made their presence felt in that version were Memphis’ Rashaan Salaam (528 yards, five touchdowns) and Orlando’s Derrick Clark (only 39.5 yards/game but a league-leading seven touchdowns). But the best running back from 2001 was Chicago’s John Avery, who averaged 88.9 YPG and finished with 800 yards and five scores. Avery rushed for 200+ more yards than the next-best guy (Smart).

As for the more recent XFL, Tampa’s DeVeon Smith finished as the league leader with 365 total yards, though he failed to score a touchdown.

For the third time in five weeks, Cam Phillips is your XFL Star of the Week.

Even though he only played in the XFL for five games, we’re giving the nod to Cam Phillips. Phillips thoroughly dominated just about every game he played in and was the perfect target for PJ Walker all season long. Phillips caught at least eight passes in three of his five games, topping 120 receiving yards twice. He also had three multi-touchdown games, including two games with three scores each. He finished the abbreviated season with 31 receptions for 455 yards and nine touchdowns. For perspective, that’s more touchdowns than any receiver scored in the 10-game 2001 season. Had he been able to complete the year, Phillips was on target for some gaudy numbers. No wonder he was named XFL Star of the Week three times.

Back in 2001, there were quite a few receivers who could have earned the honorable mention spot. Birmingham’s Stepfret Williams led the league with 828 yards while LA’s Jeremaine Copeland led the league with 67 receptions. But it was Dialleo Burks who put together the most complete season that year, finishing with 659 yards (19.4 YPC) and seven touchdowns. Burks jumped around football leagues for much of his career, getting a cup of coffee with the Carolina Panthers in 1999-2000.

Kevin’s back to playing chess again 😯

It’s tough to pick out defensive superstars in either version of the XFL as both leagues tried to cater to offenses. We’re making a judgment call and saying Cavon Walker in the latest version is the top defender overall. Walker led the league with 4.5 sacks as well as nine QB hits. He also added five TFLs as he helped raise a lot of hell for the Guardians in their abbreviated season. Walker signed with the Pittsburgh Steelers a few weeks back.

From the original version, we’re highlighting Eric Sloan from Birmingham. Sloan intercepted four passes on the season and returned half of them for touchdowns. Not too shabby.

The XFL downgraded the importance of kickers by eliminating extra-point kicks altogether, though Dallas’ Austin MacGinnis did manage to knock down ten field goals in five games this year. However, he’s got nothing on Jose Cortez, who went 20/25 on field goals in 2001 to score 60 total points almost double the next-best kicker in the league that season. He was also named Most Valuable Player in the championship game, kicking four field goals and helping the Xtreme win the title. He parlayed that season into a brief NFL run with six different franchises.

Someone check on @PatMcAfeeShow after this Marquette King punt 😆@xfl2020 pic.twitter.com/SIvJxCPz1o

Honorable mention has to go to Marquette King, who finished as the best punter in the new XFL, averaging 45.7. Though to be fair his stint will probably be remembered more for his amazing punt that got messed up so bad, Pat McAfee almost lost his mind on live TV.