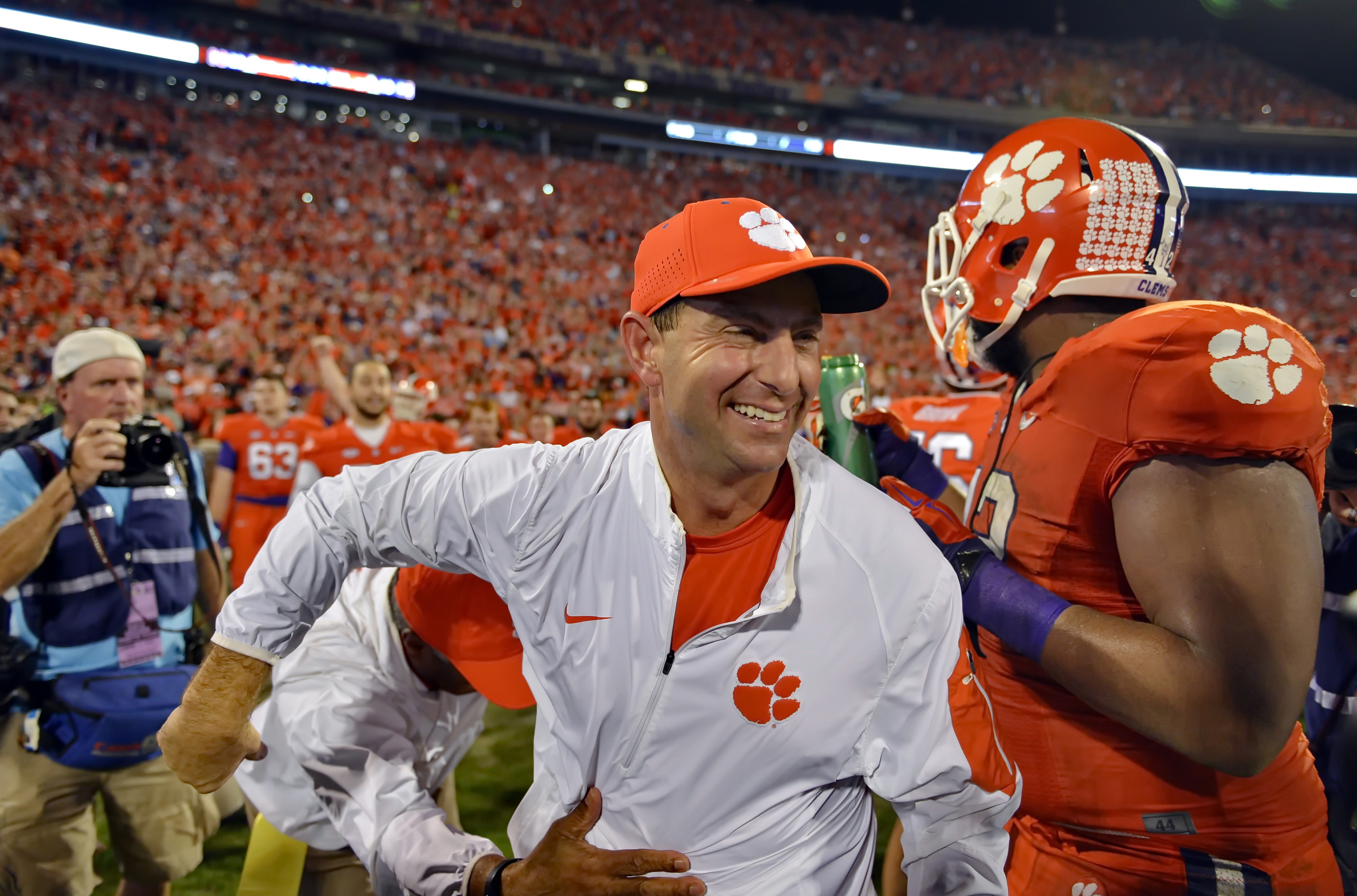 Clemson head coach Dabo Swinney is highly regarded and recognized as one of the top coaches in college football today. Nick Saban and Urban Meyer may be on the top rung of the ladder, but Swinney is just one or maybe two lower. It seems like a long time ago when it was fair game to question whether or not Swinney should even be the head coach of a college football program, but few coaches have gone through their growing pains in their first few years as a head coach to turn out to be one of the best there is the way Swinney has.

Swinney was named the head coach of the Clemson program in the middle of the 2008 season. A midseason resignation by Clemson head coach Tommy Bowden after a disappointing 3-3 start put the program in the hands of Swinney, who had been serving the program as a wide receivers head coach and recruiting coordinator for the past five seasons. Swinney went 4-2 in his run as interim head coach, which was good enough to get Clemson into a postseason bowl game, the Gator Bowl against Nebraska. Swinney took a loss in his first bowl game, but new traditions like the Tiger Walk were a welcomed addition to the program and the mood around the program had clearly changed. Swinney was named the full-time head coach before the bowl game, which provided a sense of stability for the program, but was he a flash in the pan? The jury was still out.

The 2009 season would be Swinney’s first full season as a head coach. Things did not start out all that well for Swinney. After a season-opening win against Middle Tennessee, Clemson lost their ACC opener against Georgia Tech and would drop games against TCU and Maryland in the next three games to drop to 2-3. One story appearing on Bleacher Report was titled “The Honeymoon is over for Clemson’s Dabo Swinney.” Hot seat talk was beginning to burn. Message boards were flaming (especially those watching closely from Columbia).

Clemson regrouped with a blowout win over Wake Forest (without the help from the Wake Forest radio booth as far as we know), but would face a reality check of sorts the following week on the road against Miami (who was once again getting people to think the Hurricanes may be back; Miami was No. 10 in the AP poll at the time). It was a game of swings that had some questionable coaching decisions along the way.

ahhh, dabo swinney…keep making me wonder how on earth you got that job. as if i need another riddle to solve.

How did that game end?

Clemson would go on to win their next four games to ride the winning streak to six games before falling on the road against in-state rival South Carolina and then once more to Georgia Tech in the ACC Championship Game. The season did end on a high note, however, with a Music City Bowl victory over Kentucky.

The next season did not go so well for Dabo either. In his second season on the job as head coach of the Tigers, Clemson struggled their way through a 6-6 season. The Tigers finished second in the preseason ACC media poll, with 16 first-place votes (but not one vote to win the ACC). The season started out with a pair of blowouts over North Texas and Presbyterian and immediately hit a road block with a three-game losing streak against Auburn, Miami and North Carolina. These Tigers showed they were not ready to take on the best teams on their schedule just yet, although later they showed some good fight in a 16-13 setback on the road against Florida State. But a 22-point loss to Steve Spurrier’s South Carolina Gamecocks sent the Tigers into the postseason with a .500 record. In the Meineke Car Care Bowl in Charlotte, the Tigers were taken down by South Florida, 31-26, ensuring another offseason of criticism and naysayers questioning if Dabo was the right guy for the job.

Clemson faithful and some in the media were already sounding off about why Clemson athletic director Terry Don Phillips should be removed (he retired in 2012), citing the hiring of Swinney as one of the reasons.

Will Joe Don Baker fire Yabba Dabo Swinney after this game and bring in a real head coach?

I'll bet in 5 years we'll all look back, amazed, and wonder why Dabo was given keys to that great program. TDP will, almost certainly.

Clemson, if you're not going to fire Dabo Swinney but bring in an OC who's 1yr removed from coaching HS, you're going in the wrong direction

How has Dabo fared since that woeful offseason? Pretty darn swell, actually.

The hiring of Chad Morris as offensive coordinator, who my colleague Bryan Fischer made note of being just one year removed from coaching high school football (1994-2009 at various high school programs in Texas before joining the Tulsa coaching staff in 2010), quickly became one of the top offensive minds in the game (and among the highest-paid assistants as well). In 2011, Clemson went 10-3 in the regular season and upset the No. 5 Virginia Tech Hokies to win the ACC championship and finished the year with a top 25 ranking. A miserable evening in the Orange Bowl where they were mugged by West Virginia in an epic beat down, 70-33, put a damper on the season overall, but was not enough to take away from the direction of the program under Swinney.

Clemson went 11-2 the following season, missing out on an ACC title shot behind Florida State, but finishing the season with a victory over LSU in the Chick-fil-A Bowl in Atlanta.

Clemson fans will be able to overrule me here if they wish, but that victory over LSU is where Swinney truly began to change the narrative about his program. The concept of “Clemsoning” had been floating around for a couple of years under Dabo, but starting with this New Years Eve game is when the image of Clemson began to change. The following season, Clemson went 11-2 with a 40-35 victory over Urban Meyer and Ohio State in the Orange Bowl. The 2014 season saw a little bit of a step back in the progress under Swinney but it ended with a bang in the Russell Athletic Bowl, a 40-6 victory over Oklahoma. Last year the story continued as Dabo coached Clemson to its first No. 1 ranking since 1981, won the ACC and took the top seed in the College Football Playoff. The Tigers pushed Alabama to the wire as much as they could in the championship game last season, and now the Tigers are once again gearing up for another national title shot in the College Football Playoff, and they have a slide in their football building. You think Clemson is building a slide six years ago? Probably not.

Dabo changed the narrative surrounding his program years ago. All that is missing now is a national championship trophy.