1 Burning Question: Can the Physicality of the Razorbacks Succeed Long-term under Bret Bielema in the SEC?

It has worked for Alabama. Tennessee, Florida, and every other SEC contender has tried to mimic it to some extent.

After putting together a stellar defense in 2014, the Razorbacks fell short of expectations last season. The young core struggled to create pressure on the quarterback or stop spread attacks that were potent or even mediocre last season.

Everyone witnessed Dak Prescott toss five touchdowns and gain over 500 yards of passing offense in the second-to-last game of the season. Bielema’s rough and tumble image on the sideline began to crumble in week three, when Kliff Kingsbury not only ripped him in the media, but watched his passing offense complete 87 percent of its pass attempts. In back-to-back games against the Red Raiders and Texas A&M, the Razorbacks gave up a total of 673 passing yards.

Overall, only four starters return to the offense. Wide receiver Drew Morgan is the only returning starter at the skill positions.

The fact of the matter is if you plan on physically imposing your will offensively over opponents, you have to win close games. Before the 2015 season, Bielema was 0-7 in one-score games. He heads into 2016 with a 3-10 record in nail-biting games over the last three seasons.

Can physicality outmatch speed in the powerful SEC? 2016 will be the banner year to find out, as Bielema plans to run a three-headed rushing attack that rivals the 2010 Wisconsin group that nearly had three 1,000 yard rushers in John Clay, James White, and Montee Ball. 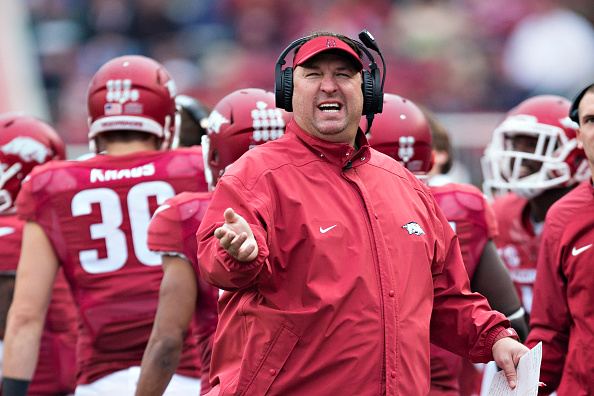 FAYETTEVILLE, AR – OCTOBER 31: Head Coach Bret Bielema of the Arkansas Razorbacks reacts to a replay on the scoreboard during a game against the UT Martin Skyhawks at Razorback Stadium on October 31, 2015 in Fayetteville, Arkansas. (Photo by Wesley Hitt/Getty Images)

116.56 — This is the number of yards per game the Razorbacks gave up on the ground. It ranked as the 12th best total in the country in 2015. However, Arkansas gave up 275 yards per game through the air — which ranked 117th. Among the schools in Power 5 conferences, only Rutgers, Kansas State, Nebraska, Kansas, Oregon, Indiana, and Arizona State fared worse against the pass last season.

6 — The amount of games Arkansas won or lost by eight points or less in 2015. Three of their regular season games ended in overtime and after losing two of their first four games by a total of 11 points, the Razorbacks found a way to win close games — beating Tennessee by four on the road to begin October. They then managed to get two conference wins over Auburn and Ole Miss later in the season. The Razorbacks were five points short in games they should have won against Mississippi State and Toledo. With those wins, the Razorbacks would have captured their first double-digit win season since 2011.

Why it matters: The Razorbacks have had an opportunity to play this game on a major stage in Arlington in four of the last six years and just have not shown up on the national stage. Arkansas has lost four straight to the Aggies. The last two games have been by a touchdown.

Last year, it was an overtime score on the second play of the extra frame that sealed it for Kevin Sumlin’s squad. In 2014, his team overcame a 14-point deficit in the fourth quarter to down Jerry Jones’ alma mater.

If the Razorbacks want to move into the upper echelon of the conference, they have to be able to beat a team like Texas A&M on a more regular basis.

Why it matters: The Rebels will be a favorite in the conference again this year and you can guarantee that it will be an important statement game for Bielema’s squad. Last year, his team won an improbable overtime thriller that ended with quarterback Brandon Allen scoring with his legs on a two-point conversion — a crazy fourth down-and-25 play that ended in a 31-yard gain after Hunter Henry caught an Allen pass and lateraled it backward to Alex Collins, who picked it up off the ground and ran for the first down. He then fumbled the ball but Dominique Reed was able to recover.

This game is to prove that their play against a top-10 team last season wasn’t a fluke and that the Hogs are on the climb as a contender in the SEC.

Why it matters: When your team returns nine starters on defense and three of its four starters in the secondary, a game versus a team that you gave up 508 passing yards against is circled on the schedule the following year.

This is especially true when the opposing quarterback scored seven total touchdowns and you still lost, despite scoring 28 straight points to start the second half to erase a 17-point deficit.

Did I mention that the game ended on a blocked field goal attempt?

I believe it is safe to say that Arkansas wants this game more than any other heading into the 2016 season. 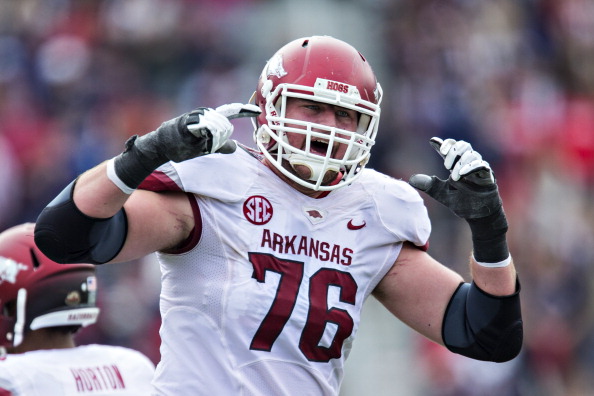 OXFORD, MISSISSIPPI – NOVEMBER 9: Dan Skipper #76 of the Arkansas Razorbacks yells toward the sideline during a game against the Ole Miss Rebels at Vaught-Hemingway Stadium on November 9, 2013 in Oxford, Mississippi. The Rebels defeated the Razorbacks 34-24. (Photo by Wesley Hitt/Getty Images)

Dan Skipper, RT – First-year starting quarterback Austin Allen has to love the idea of a 6-foot-10, 326-pound tackle protecting him up front. His athleticism makes him very valuable this season — especially with three new starters up front. Skipper has a reporter 30-inch vertical leap. Are you kidding me?

Kody Walker/Rawleigh Williams, RB – Bret Bielema wants to restore the running factory he built in Wisconsin. That starts with Kody Walker and Rawleigh Williams — both of whom are returning from injury. For those worried about the running game, remember that Bielema isn’t looking for star players at the position. He loves guys like Walker and Williams that can move the chains in various ways.

Deatrich Wise, DE – The pure athlete didn’t start for Arkansas last year, yet still found a way to create eight sacks as a third-down specialist. He will be counted on to continue building on the strengths and weaknesses of the defense. He’ll be instrumental in both stopping the run at the line of scrimmage and improving the pass defense by continuing to get pressure on opposing quarterbacks.

Brooks Ellis, LB – The senior has been very versatile during his time at Arkansas and will be asked to captain the defense from the middle linebacker position after spending some time at weakside a year ago. He led the Arkansas defense with 102 tackles in 2015. 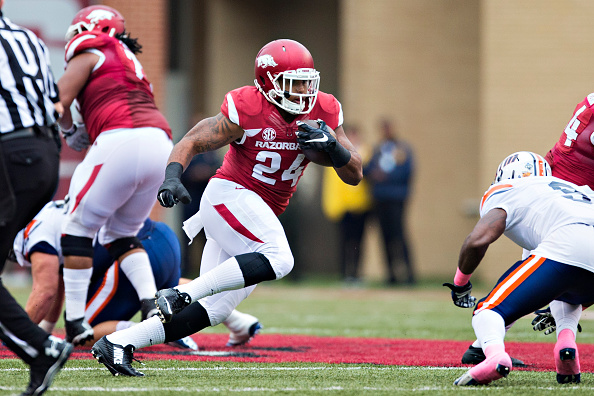 FAYETTEVILLE, AR – OCTOBER 31: Kody Walker #24 of the Arkansas Razorbacks runs the ball during a game against the UT Martin Skyhawks at Razorback Stadium on October 31, 2015 in Fayetteville, Arkansas. The Razorbacks defeated the Skyhawks 63-28. (Photo by Wesley Hitt/Getty Images)

5. Kody Walker and Rawleigh Williams will both rush for 1,000 yards

Yes, the Razorbacks depended on Brandon Allen and the passing game to win games in 2015. That will change this season with the talented duo of Walker and Williams — a pair that can help Bret Bielema establish the time of possession tone that he loves to set in close games.

4. The Razorback secondary won’t give up more than 350 yards passing in a game this season

You know your secondary has issues when this is a bold prediction to make heading into the season. Let’s face it — Arkansas has some decent talent returning in the secondary in Jared Collins, D.J. Dean, and Josh Liddell. The issues that haunted the Razorback defense in 2015 should be addressed by new defensive backs coach Paul Rhoads, who replaces Clay Jennings after serving as the Iowa State head coach since 2009.

3. Austin Allen will pick up where his brother left off

Under Dan Enos, it isn’t insane to expect Allen to complete 65 percent of his passes and toss more than 30 touchdowns. The key for the junior will be consistency early in the season and proving that he deserves the same amount of pass repetitions as his brother — who torched defenses across the SEC last season.

Seven more takedowns of the quarterback isn’t too much of a stretch for a defensive end who will see a lot more playing time in 2016. He will also have a free reign on third down to get to the opposing quarterback.

Wise got eight sacks last year as a one-down specialist and starting just one game in his three seasons on the field. He didn’t record his first one until week six of the 2015 season.

I feel bad for the Louisiana Tech, TCU, Texas State, Texas A&M, and Alcorn State defenses who will face the 6-foot-5, 278-pound edge rusher that has a 4.9 40-YD dash time to his name.

1. Arkansas will finish with 10 wins

It might take a win against Ole Miss or Louisiana State, but the Arkansas Razorbacks will be in a good position to win 10 games if they stay healthy and improve defensively in 2016.

Those chances will increase if they can head into their matchup with Alabama at 5-0 after games against Louisiana Tech, TCU, Texas State, Texas A&M, and Alcorn State.

What makes it a bold prediction is that in order to be a 10-win team, Bielema will have to win a handful of very close games. I think he improves that 3-10 record in one-score games dramatically by the end of 2016.