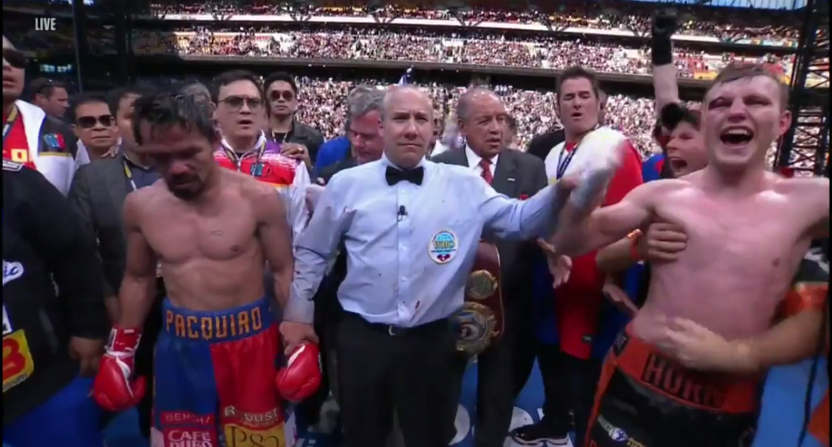 Jeff Horn was 16-0-1 heading into his WBO welterweight bout with reigning champion Manny Pacquiao. He didn’t have much of an advantage, aside from the fight being staged in his home country of Australia, but credit to him: he came out swinging.

Literally, in fact, as he was throwing punches from both sides, and though Pacquiao landed a much higher percentage of blows, the volume of Horn’s shots and his willingness to bring the fight to Pacquiao made for some thrilling moments at times. That made for some great television, which was excellent news for ESPN viewers, as the fight was on ESPN.

The fight featured some thrilling exchanges, and Joe Tessitore was excellent on the call, detailing the action crisply while emphasizing the big moments. His broadcast partners, Teddy Atlas (who is somehow only 60 years old) and former champ Tim Bradley, were not quite so steady throughout the evening. Atlas went on multiple rants praising just Bradley’s attractiveness, which was entertaining; he noted the former boxer always looked very handsome, and indeed still looked great in the suit he was wearing.

Bradley is very obviously a former boxer, and that showed on multiple occasions, including when he announced that he thought the fight was closer than Teddy Atlas thought it was near the end of the 12th and final round:

Though it’s never fun to laugh at someone’s obvious residual effects from decades of being punched very hard in the head, that slip came in the middle of what proved to be prescient analysis. Horn was almost knocked out in the 9th round, and as he sat in his corner, the ref announced his intentions to stop the fight. Horn and his team convinced the ref to allow the match to continue, and Horn battled on, eventually going the distance in impressive fashion.

Horn definitely landed more punches than the broadcast team gave him credit for landing; Atlas, in particular, seemed bent on handing the fight to Manny long before it was over.

Teddy Atlas could watch Manny get knocked out and still award him the fight.

Teddy Atlas: "Take nothing away from Horn!"

*proceeds to take something away from Horn*

But, then, boxing pulled a boxing:

And then, chaos. Horn, freshly crowned, immediately called out Floyd Mayweather, mocking his decision to fight Conor McGregor in the nicest, most polite way imaginable:

Horn also announced the impending birth of his child, which drew one of the louder roars of the night. Australia really does appreciate virility, apparently.

And Teddy Atlas absolutely lost it, going on a rant about participation trophies:

Before straight-up telling Horn he thought Manny was robbed:

Overall, though, that was a hell of an entertaining evening. The result is going to cause a massive debate in boxing circles, with good reason:

Thanks to the broadcast venue, more people are going to be able to take part in the discussion. Airing it on Saturday evening of Fourth of July weekend was also a plus; there was very little competition for eyeballs, and the fairly exciting fight combined with the Pacquiao name and an incredibly controversial finish makes this a very good night for ESPN, despite the general commentary issues.

The production was solid, with decent presentation, and it’s fair to look forward to the just-announced ESPN fights in August, part of ESPN’s deal with Top Rank promotions. The Mayweather-McGregor match might be a sideshow, in many ways, but at the very least it is going to create more interest in boxing, a sport that should have found a way to regular cable much sooner than it did.

Tonight’s fight might be a good step in that direction. A potential Horn-Pacquiao rematch seems like a logical step as well, and considering how both men approached the first match, it’s hard to imagine the sequel ending up less entertaining, or more controversial.