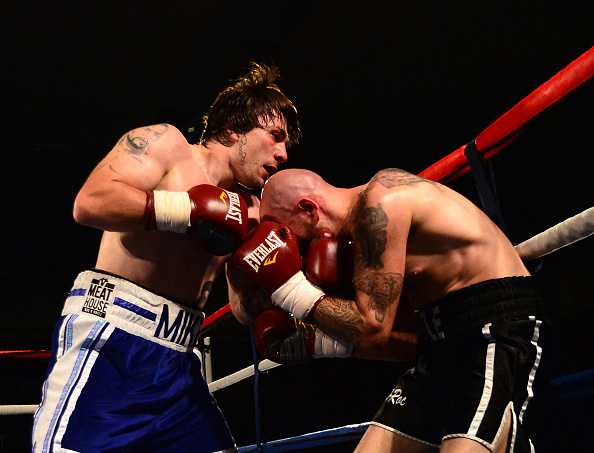 Scottish boxer “Iron Mike” Towell died on Friday evening after suffering a serious head injury in a match in Glasgow.

The Guardian reports Towell was injured after getting defeated in five rounds verse Dale Evans on Thursday. The undefeated boxer was taken to hospital following the bout where it was discovered he had severe brain bleeding and swelling. He was eventually taken off life support Friday morning, and passed away Friday evening, 12 hours later.

According to Towell’s partner, Chloe Ross, Towell had been complaining about headaches for the past few weeks. Towell’s family and his manager Tommy Gilmour were with at the hospital when he lost his final fight.

“It has been the longest 24 hours of our lives. My baby has lost his daddy. But he will be so so proud of his dad in what he achieved.”

Towell’s opponent, Evans, issued a statement before Towell’s death was announced, and said he was sad to see Mike come “out the wrong side.” He added he “never wanted to see my opponent being stretchered out of the ring” and said his heart goes out to Towell’s family. Tributes to Towell poured in from much of the rest of the Scottish boxing community Friday and Saturday:

Members of the boxing community paid tribute to the sportsman, known as “Iron Mike Towell”. St Andrews sporting club, who staged the fight, said he would “always be in our hearts”. A spokesman for the club said that nobody in Towell’s management team was aware of any headache problems leading up to the fight.

Greg Menzies, head coach at Dundee Boxing Club, said Towell would be sadly missed. “We’re obviously devastated for him and his family,” said Menzies. “It’s a small community so everybody’s really shocked. He was a really nice guy, always winding up people in a good way. He was a really good guy and he’ll be certainly missed.

“A lot of guys in our gym are gutted, as even though he was maybe from another club, he was still a Dundee guy and he trained at every gym and he got on with everybody. He was one of Dundee’s top boxers so he was an inspiration for the young kids. We’re all gutted.” Speaking of Towell’s boxing style, he added: “He always gave 100%, he was always coming forward, there was no going back with him. He was a wee tough nut, he was just all heart.”

The trainer Shane McGuigan said on Twitter: “Heartbreaking news that Mike Towell has lost his life. May he rest in peace, thoughts go out to his loved ones. RIP.”

Eddie Hearn, the boxing promoter, said: “Absolutely devastated by the passing of Mike Towell – all of our thoughts with his friends and family at this time.”

Towell was just 25. He and Ross had one child named Rocco.