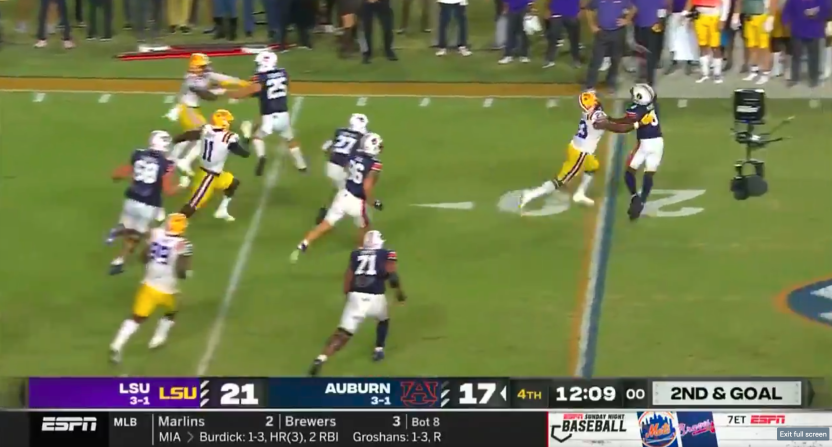 A trick play can give a team a ton of momentum when done correctly, but when things go bad they typically go very horribly. The latter was the case for the Auburn Tigers in the fourth quarter of their game against LSU on Saturday.

The Auburn Tigers found themselves down by four on LSU’s nine-yard-line, where they dialed up a trick play on a jet-sweep that turned into a pass from Auburn wide receiver Koy Moore.

Moore’s attempt did not go as planned for the Tigers; he was pressured as soon as he got the ball and ended up throwing a brutal interception on a pass where it looked like there were no Auburn players even in the area.

The play looked like a complete disaster from the very start, and many have taken to social media to roast Auburn for getting cute on their play-calling in this situation.

Oh my. Auburn gets cute with a trick-play and throws the interception.

Auburn had it 1st and goal. Unreal

Auburn had 1st and goal and ran a trick play – that was intercepted.

Lots of #SurrenderCobra 🐍 sightings on the Plains this season pic.twitter.com/BdmXFv0WTG

Auburn fans have had ENOUGH pic.twitter.com/smcJXifYWT

Auburn head coach Bryan Harsin will certainly have some explaining to do for that play being called at a crucial point in the game.

While some of the responsibility is on the player to throw the ball away if nothing is open, having a receiver throw the ball near the goal-line is a recipe for disaster.

They will certainly be kicking themselves for this game if they aren’t able to win this game against an SEC rival due to this disastrous play, especially since they have a matchup against No. 1 ranked Georgia next weekend.