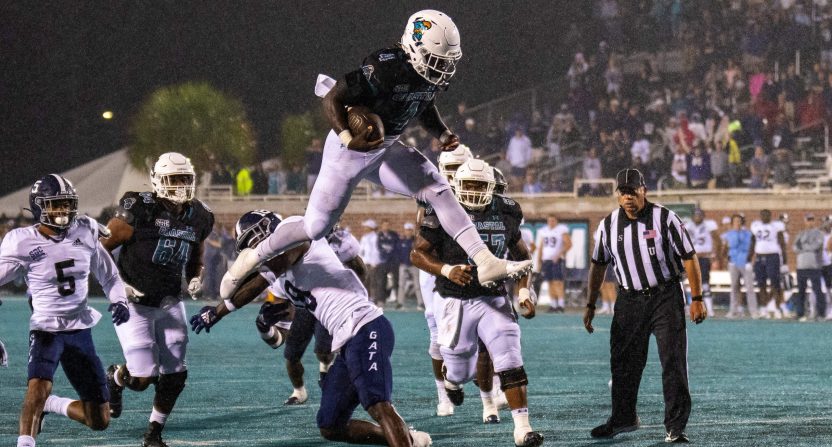 The Coastal Carolina Chanticleers held off the Georgia Southern Eagles 34-30 on Saturday night in Conway, SC to stay undefeated at 5-0. And the go-ahead Coastal Carolina touchdown featured an incredible play.

Trailing 30-28 with 45 seconds remaining in the fourth quarter, Coastal Carolina running back CJ Beasley took a handoff and went 24 yards for what would serve as the game-winning touchdown. At roughly the 10-yard line, Beasley straight-up jumped over a Georgia Southern defender and continued running to the end zone for the score.

The Coastal Carolina radio call — as supplied by Timothy Burke — includes the analyst yelling “OH MY GOSH!” in disbelief at Beasley’s hurdle.

NOW THAT'S HOW YOU HURDLE pic.twitter.com/Th4PKDrW4Z

That’s definitely one of the top plays of the college football season so far, and it’s a strong contender for Hurdle of the Year.

The Chanticleers will look to improve to 6-0 when they go on the road to face the Louisiana-Monroe Warhawks next Saturday.