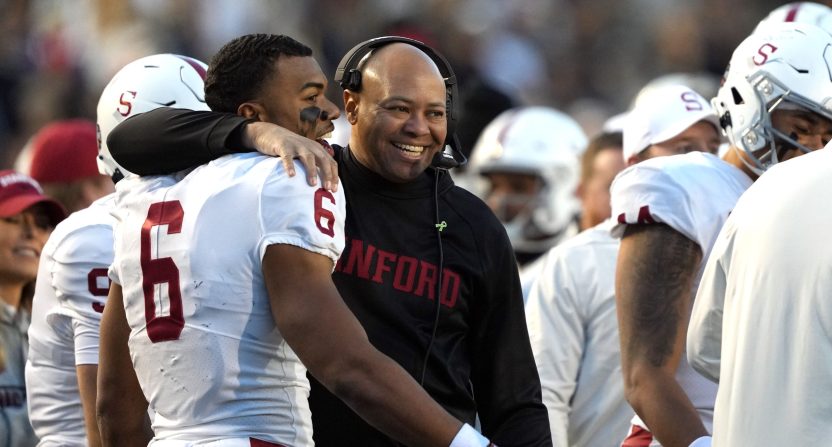 While one Pac-12 coaching vacancy seems likely to be filled soon, another head coaching job in the conference is now available. For the first time since the end of the 2010 season, Stanford is looking for a new head football coach. David Shaw, who has led the program since 2011, resigned shortly after the Cardinal’s season-ending loss to BYU.

Several people in the college football world sent their best wishes to Shaw after the news was made public.

1 of the best (coaches/people/recruiter) I have ever met in my time as a high school coach or AD. An excellent representative for @GoStanford @StanfordFball and in the game of Football. Great demeanor, intelligence and leadership. Best of Luck @CoachDavidShaw https://t.co/Bm1f1niy1y

Thank you @CoachDavidShaw for everything you have done for @Stanford on and off the field. https://t.co/fugcD7YSBm

Shaw finished his run at Stanford with a 96-54 overall record, going 64-50 in Pac-12 play. His tenure with the Cardinal can essentially be broken up into two different eras.

From 2011-2018, Stanford was routinely one of the Pac-12’s best teams and occasionally one of the best in all of college football.

Stanford won the Rose Bowl under Shaw in the 2012 and 2015 seasons — defeating Wisconsin and Iowa, respectively. Shaw led the Cardinal to an additional Rose Bowl in 2013, losing to Michigan State. Stanford also reached the Fiesta Bowl in 2011 and lost to Oklahoma State.

Since the 2018 season, though, it’s much a much different story. Over the last four seasons, Stanford has a combined record of 14-28 and a 10-23 mark in conference play. Three of those four seasons produced losing records, with the only exception being a 4-2 campaign in the COVID-19 shortened 2020 season. The Cardinal have also not reached a bowl game since the 2018 season. In 2022, Stanford finished 3-9 overall and 1-8 in conference play.

Shaw has deep ties at Stanford. He played there from 1991-1994. Before becoming the head coach, he served as an offensive coordinator under Jim Harbaugh from 2007-2010.

During Stanford’s more successful period under Shaw, his name would frequently come up in regard to other college jobs (as well as some NFL positions) when they became available. Given the Cardinal’s recent downturn in success, Shaw’s stock is likely not as high now as it was then. But Shaw will be 51 at the start of the 2023 season. Given his relative youth and his overall record at a place that’s been proven tough to be competitive, it’s likely that — assuming he wants to — Shaw will have chances to coach again.