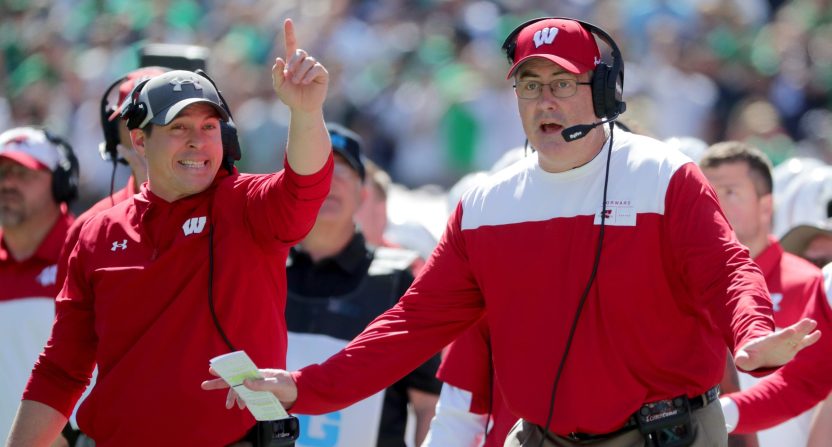 College football is a “what have you done for me lately” sport and Wisconsin head coach Paul Chryst learned the hard way. In his eighth season with the Badgers, Chryst was fired and defensive coordinator Jim Leonhard will be the interim head coach.

Overall, Chryst’s tenure was a winning one. He was 67-26, including wins in the Cotton and Orange Bowls, and never had a losing record. However, Wisconsin was 15-10 since 2020 and in the first five games this season, Wisconsin was 2-3. That included a 17-14 loss to the Washington State Cougars and a 34-10 loss to the Illinois Fighting Illini this past weekend.

While Wisconsin obviously sees this as an important move, it’ll be a costly one. After signing an extension last year, Wisconsin must now pay him $16.4 million if he’s fired without cause.

Statement from University of Wisconsin Director of Athletics Chris McIntosh

The news elicited a wide range of reactions. Some were surprised, some feel it’s a mistake, and some think it’s for the best. Either way, it got people talking.

Paul Chryst is a Madison native and Wisconsin alum. He has spent 33 of his 56 years of life in town as either a kid, a Badgers QB or a UW coach.

Paul Chryst’s greatest skill is that in every single photo of him, he looks like he just learned the neighborhood kid threw a ball through his glass window. pic.twitter.com/QS2Ec95oUS

Paul Chryst is a class act and a good coach. But the evidence suggests he lost the locker room when UW came out flat in the second half yesterday. That happens to good coaches, too. Leonhard has his shot and his team needs a jolt.

So here we go.

If you squint hard enough, Paul Chryst looks like 2017-2018 Mike McCarthy. Good man, but the program has gone stale.

Last year, on this very week, Paul Chryst got a raise from Wisconsin.

Firing Paul Chryst is a very Nebraska-like move by Wisconsin. It probably won’t work out like they think it will.

Paul Chryst gets the axe (just not Paul Bunyan's) https://t.co/8DSWlVmDvh

local CBS going with the "NUKES ARE FALLING" font to tell us Paul Chryst is probably fired. Madison is wonderful pic.twitter.com/3CMsHn14Pc