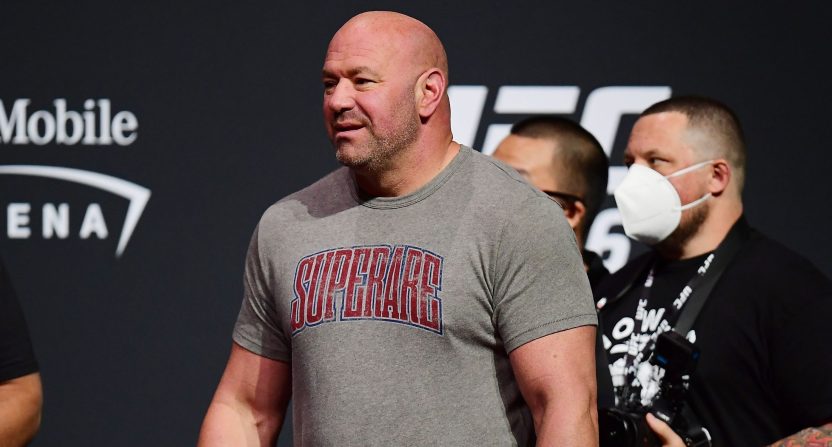 Last week, a video of an ugly altercation between longtime UFC President Dana White and his wife Anne emerged. The video showed Anne White slapping her husband and Dana retaliating with a strike of his own, followed up by seemingly shoving her to the ground.

White quickly owned up to the situation, saying that there was no excuse for his behavior.

“You’ve heard me say for years, ‘There’s never ever an excuse for a guy to put his hands on a woman,’ and now here I am on TMZ talking about it,” said White.

In the days since, ESPN, which has a lucrative relationship with UFC, has offered fairly minimal coverage of the incident. The only notable coverage was on First Take where Stephen A. Smith and Molly Qerim downplayed the incident and both referred to White as “a friend.”

ESPN writer and editor Jeff Wagenheim noted in a series of tweets that there was an unofficial sentiment inside ESPN not to criticize White or UFC because they were a business partner.

ESPN has been roundly criticized for its lack of coverage around the incident, including by many of its former employees.

“If it happened with (Roger) Goodell or an owner do you imagine it would be quiet? Because I don’t,” said Dan Le Batard.

Ariel Helwani echoed that sentiment, saying “I can guarantee you, if it was any other sports owner, any other executive, he would be raked over the coals.”

Now, former ESPN employee Jemele Hill is scorching the Worldwide Leader over its silence in a new piece in The Atlantic.

“The issue isn’t that ESPN has ignored White’s situation entirely. It’s just that the coverage of the incident has overall been pretty soft,” said Hill. “Having worked at ESPN for 12 years, I know intimately the difference between cursory coverage and a nonstop national conversation fueled by the massive sports media machine. The most recent example of the latter is the Brooklyn Nets star Kyrie Irving, who became a daily fixture in ESPN’s news coverage and commentary after he was suspended for posting a link on his social media to an anti-Semitic film.”

Hill also noted that it’s strange that so many people are stepping up to defend or make excuses for White when he himself appears ready to accept the consequences.

“The grand irony of all of this is that White doesn’t actually seem eager to accept the graciousness that others are so willing to give him,” said Hill. “White isn’t offering any excuses, so why is almost everyone else doing it?”