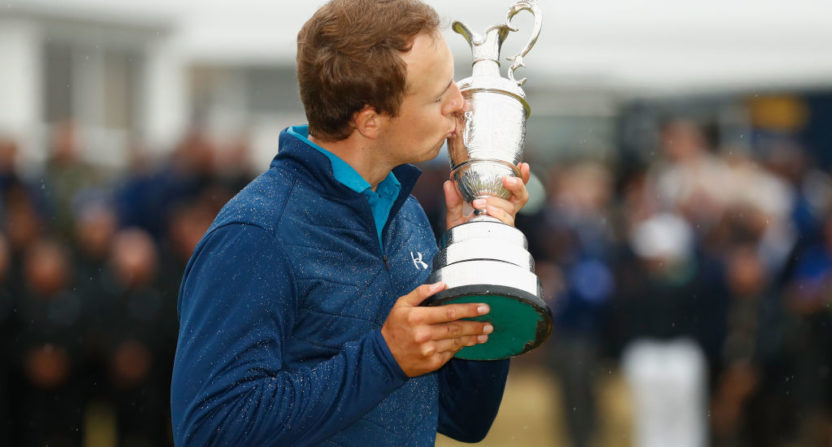 23-year-old Jordan Spieth has had the type of run that many athletes in any sport would envy. Starting in 2015, Spieth broke out to win The Masters as well as the U.S. Open. In fact, Spieth’s worst finish in a major that year was a 4th place finish at St. Andrews and included a runner-up finish in the PGA Championship and the same result at Augusta in 2016.

Spieth got back to this form by winning The Open Championship at Royal Birkdale after a thrilling final stretch against Matt Kuchar. After struggling on the front nine, leading to a tie, Spieth buckled down after losing the lead on 13 going -5 on the final five holes including an eagle on 15 and this colossal putt.

Spieth’s third major win, happening just four days before his 24th birthday puts him on the same pace as Jack Nicklaus. Naturally, this is going to cause people to wonder whether or not Spieth can keep this up and pass Jack’s record of 18 majors.

Not to go into everything that Tiger Woods has been through for the past eight years but we all essentially assumed that Tiger would blow past Nicklaus and put up an unreachable mark of major wins that would never be broken. Now I’m not saying Spieth is going to someday cheat on his wife or develop chronic back problems, but Tiger is a cautionary tale for those of us who just want to assume something is going to happen years before there is even an opportunity for it to actually happen.

But this doesn’t mean that it’s impossible for Spieth to catch and pass Nicklaus. Spieth has three majors, is turning 24 and is six weeks away from competing in the PGA Championship. Which if he wins, would be the seventh and youngest golfer to complete the Grand Slam (Nicklaus, Woods, Hogan, Player, Sarazen and Jones). This is easier said than done but winning one major every year would put Spieth at 18 by his 39th birthday. So in theory, Spieth could catch Nicklaus.

But while Spieth has a great start to his career, let’s not anoint him as the guy who will definitely pass Jack Nicklaus’ majors record. Golf, among all sports, has become way more competitive now than ever. And it doesn’t matter how great someone is, it’s a tough ask for someone to be consistently at the top of their game for the next 15 years. Even if Spieth’s body holds up, someone from the current field or someone we have never heard of could come in and unseat Spieth. At the most optimistic estimation, Spieth isn’t getting anywhere close to Jack for at least the next 10 years. So enjoy the journey and if Spieth gets to Jack, that’s great. If he doesn’t, well at least we were entertained.