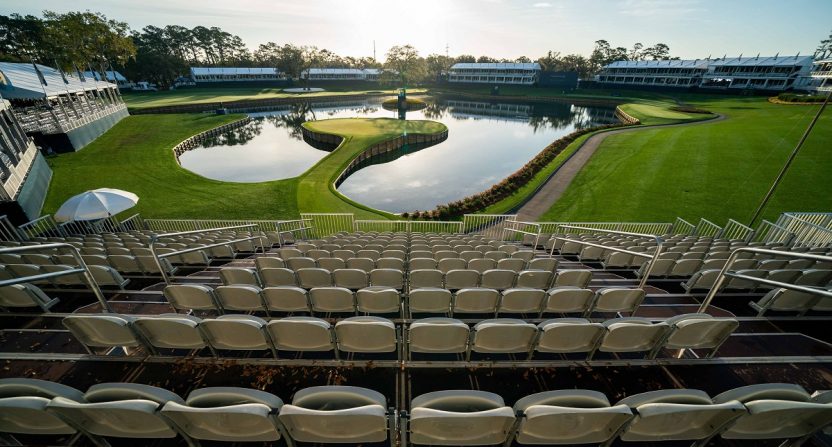 With the sports world (and just the world) in a holding pattern as the COVID-19 pandemic ebbs and flows, major leagues and organizations around the world have held off on proclaiming any sort of solid return timeline.

That’s about to change, though; according to a Golf Digest report from Brian Wacker, the PGA Tour is set to announce a return date, and it’s earlier than you’re probably expecting.

PGA Tour officials are expected to announce this week their intention to resume the tour season, halted due to the COVID-19 pandemic, on June 11-14 at the Charles Schwab Challenge, multiple sources have told Golf Digest. It’s also expected that fans will not be allowed to attend that first tournament at Colonial Country Club in Fort Worth. As the Tour looks to follow health and safety guidelines set by government and health officials, other early tournaments also are expected to be played without spectators.

The sources spoke on the condition of anonymity because they are not authorized to speak on the Tour’s behalf. Tour officials discussed plans with the Players Advisory Council during a conference call on Tuesday.

It’s a fairly optimistic timeline, but it’s also clear the the PGA Tour probably isn’t just declaring it viable and assuming the government will let it happen. Of course, that doesn’t mean it’s inherently responsible; you’d like to think the federal and state governments involved would be making the rational choices, but that hasn’t always been the case. And, indeed, that this plan is being prepped today might not be a coincidence.

"We have to get our sports back," Trump says. "I'm tired of watching baseball games that are 14 years old."

As to what a revamped schedule would look like: again per Wacker, it would feature a tournament (probably the RBC Heritage at Harbor Town) in the week vacated by the U.S. Open moving to the fall, followed by this run of events from late June onward:

And then the fall run, which was announced last week by the PGA Tour and golf’s other relevant governing bodies, the PGA of America, the USGA, and Augusta National:

There are a few things to consider here. Obviously, there’s no real harm in planning for the optimistic result; it’s a lot easier to cancel things than to throw them together at the last minute. And golf does have advantages over other sports; there’s no inherent contact between players, and indeed, other than players and caddies, no real requirement for anyone on the course to be within six feet of each other. (That’s why some golf courses remain open across the country as a reasonable recreational activity.)

And even the inherent issues with broadcasting crews, course maintenance, and other things could probably be addressed by the sheer size of courses. It’s not everyone in a stadium, it’s everyone outside across a few hundred acres or more of parkland. Golf being the first sport to return sort of makes sense, from those perspectives, and if it can safely come back in June, it’s absolutely good news. Plus, it would be a hell of a run of golf!

Colonial/Heritage/Travelers would be a wildly good three week stretch.

Then the Subprime Shootout (likely without grandstands!) before the first major of the year in the Quad Cities and then Memorial.

Hopefully not wishful thinking. Eat your heart out, CBS.

The flipside to that: the PGA Tour has not exactly earned the benefit of the doubt when it comes to social responsibility during this crisis. As other sports eyed no-fan events and possible cancellations, the Tour not only pressed on with the Players Championship, but continued holding the pre-tournament festivities, including a Chainsmokers concert on March 10th.

Then on Thursday, the day after the NBA suspended their season and while college basketball tournaments across the country were being canceled, the PGA Tour went ahead with the first round, with tens of thousands of fans in attendance. (Though they weren’t allowed to seek autographs from players, which feels a bit gross in retrospect.) They finally canceled the tournament after Thursday, but how they handled that week didn’t earn the Tour or commissioner Jay Monahan many fans.

It also means there’s extra scrutiny on a decision to be the first league with a firm-ish plan to return feels off, however justified they might be for pushing forward. If the Tour wants to take the stage for themselves, they also have to be prepared for what happens if they end up having to back out again, like the Chinese Basketball Association did today. Imagine a scenario where the world is still in flux, the PGA Tour returns while other leagues (including perhaps most prominently the NBA) take a more measured approach, and then a player or someone else involved tests positive.

It’s a major risk from both a public relations standpoint and, more importantly, a societal responsibility standpoint. Hopefully they can come back, in a timely and safely manner. Whether this proposal represents the latter remains to be seen.