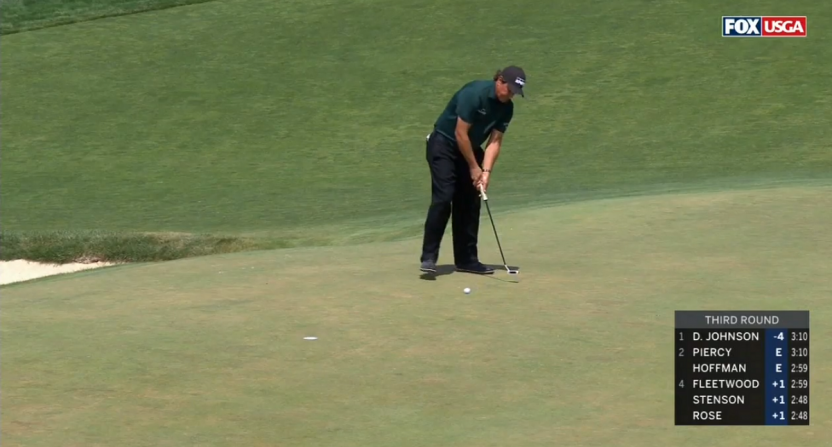 This is one of the more surprising things you’ll see. Phil Mickelson is clearly not having his best week at the U.S. Open, and his round today wasn’t going well.

But it was still shocking to see him blast this bogey putt by the hole on 13 and then, instead of watching it roll down towards the front of the green, take action:

That clearly shocked everyone, including Mickelson’s playing partner Beef Johnston:

That’s a move you don’t see amateurs do in practice rounds, and Phil did it not only in competition, but in the U.S. Open! It’s a two-shot penalty on top of the score, so it ends up being a nine, and as of now it’s on the scorecard as a such. (UPDATE: now a 10!)

Phil is clearly on tilt, too; here was his birdie effort on the next hole, which he played as a trick shot, basically:

The broadcast speculation is that Phil is just screwing around now that he’s out of contention, perhaps while also venting some frustrations with the course and the course setup itself. It’s likely going to stay a two-stroke penalty, although David Fay did point out that while unlikely, it could be interpreted as conduct unbecoming and result in a DQ.

Me: Well, Phil isn’t going to win the US Open so it seems unlikely he’ll do anything to add to his history of gaffes here.

It's amazing that Phil isn't on twitter because it seems like he says "oh man twitter is gonna love this" before about half the things that he does.

The broadcast stayed on the topic for some time, which makes sense; you literally never see that happen at this level, much less at the U.S. Open.

Oh, and it’s Phil’s birthday today, too, though you can’t really tell; he’s the one giving us all of the gifts.