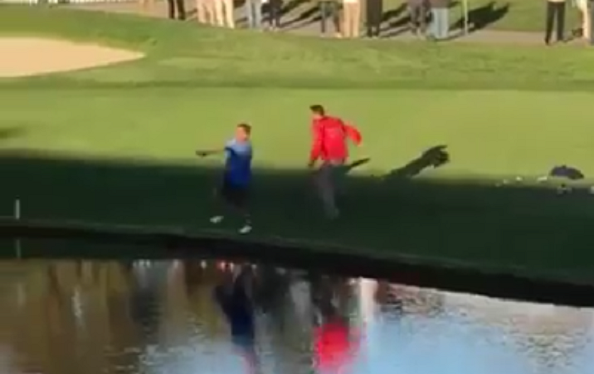 It turns out even golf is susceptible to the idiot on the field phenomenon. However, due to the unique nature of the game, these idiots can exist on both land as well as water in the course of a single idiotic jaunt.

For an excellent illustration, let us turn to this blue-shirted man at this weekend’s Farmer Insurance Open in Torrey Pines:

By far the greatest thing I saw yesterday. pic.twitter.com/WXDjRs9ZN1

There is really a lot to take in with this particular sequence of events. Our course invader felt that it was both necessary to disrupt the field of play, but not at the cost of ruining his shoes in the water. That leap may seem spontaneous at first, but this guy’s intent was clear as day from the start.

His mad dash at the end really put the icing on the cake. It was obvious from the start he was not getting far while hauling his shoes and jacket with him, but the face plant at the end *chef kiss* really took this from an okay video to an all-timer.

And I would be remiss if I did not thank golfer Harold Varner III for having the presence of mind to whip out his phone and record this incredible scene. For, without his quick thinking, this post would have never existed. So thanks, Harold, and to all you idiots out there- stay off the damn field.