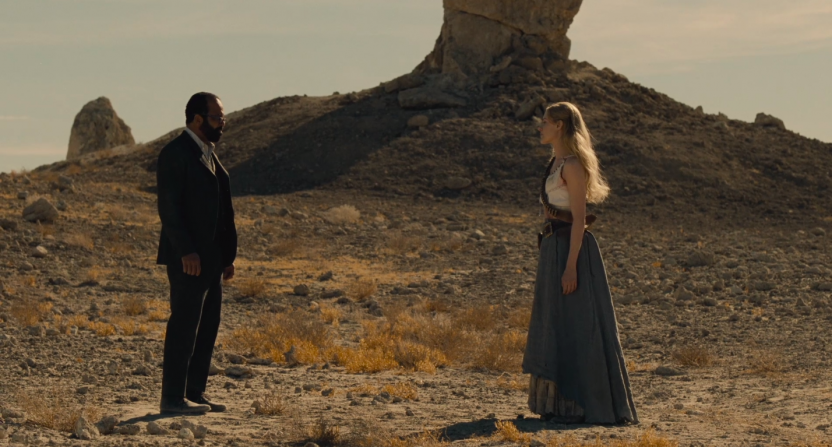 At times throughout season two of HBO’s Westworld, questions seemed like they were on the brink of being answered. Going into Sunday’s feature-length finale, “The Passenger,” one would think that the majority of questions would be answered. That was not the case, to say the least.

Just off the top of my head, here are some questions for Season 3. Is William a host? How did Charlotte become Dolores? How did Charlotte/Dolores get away with killing everyone? How many of my favorite characters are gone for good? What are the other three parks? And finally, who were those five pearls meant for?

Season three hasn’t begun production yet, so it’s safe to say that viewers will not be getting any answers for a long long time. When that new season comes around, though, what can viewers expect?

When Charlotte is on the boat leaving the park, she looks into her bag and sees five pearls. My immediate thought when I saw this image was ‘Which characters do those five pearls belong to?’ Right away, the writers and showrunners partially answered this question: original Dolores and Bernard/Arnold. When Charlotte arrives at the supposed real-life home that Dr. Ford had built for the eventual hosts who would make it out, she finds a host-printing machine.

Shortly afterwards, we see the first post-escape scene involving the original Dolores and Bernard/Arnold. It is safe to assume that they were both printed at the house, but that doesn’t answer the complete question. As for the other three pearls, my money is on some combination of Maeve, Elsie, Akecheta, Teddy, Hector, and Armistice.

Maeve (Thandie Newton) had too big of a role this past season and that lingering shot of her towards the end makes too much sense. Elsie (Shannon Woodward) may not be as big of a name, but I could see Bernard fighting for her to come back in some way. Hector (Rodrigo Santoro) and Armistic (Ingrid Bolso Berdal) may not be as important, but they played major roles in the park, so to see them come back wouldn’t be terribly surprising.

As for Teddy (James Marsden) and Akecheta (Zahn McClarnon), they may be less likely, as they were shown having made it to the hosts’ own virtual world. Speaking of…

A lot of hosts made it through “the door” and into the “valley beyond”, which was really just a fictitious virtual world that only they could inhabit, as evidenced by various humans’ inability to see “the door.” I would assume all the hosts who made it through will not be seen again and instead were given a nice write off as having made it to a world only they can inhabit.

Circling back to New Dolores’ storyline, my guess is the ultimate storyline throughout season three and any seasons beyond that (the writers have the first five seasons planned) is host infiltration of the mainland. This isn’t some grand idea that seems impossible, it’s actually happening. New Dolores (old Charlotte) has made her way into the real world and brought some friends along with her. It just remains to be seen what they actually do there.

It will also be interesting to see what sides the various new mainland hosts take. It seems clear that old and new Dolores will be on one side while Bernard/Arnold are on the other. As for who joins them on each side, well we have to wait a long time to find out.

On top of that, many characters were left at the island that Westworld inhabits. Due to the way Charlotte/new Dolores left, one could question if we even head back to the parks at all.

However, questioning who could come back is also a waste of time. The writers made it a point to show how Bernard and Dolores didn’t end up killing all the data in “The Forge.” This means there is still a copy of every human and host who has ever been inside the park, leaving open the door for anyone and everyone to return.

One final major question that will need to be at the very least addressed in season three is what exactly was happening in the post-credit scene. If you didn’t watch it, go watch it now and then come back.

Well, that’s because they may have gone into different facilities entirely. Before seeing the post-credit scene, William is last shown on the beach with doctors encircling his barely alive body. While that was in fact William, that may have not been a human version.

During the post-credit scene, William can be seen walking into an empty and dried out version of “The Forge.” When he arrives he is confronted by his daughter Emily (Katja Herbers). From there, the two walk into the same room where William was testing his father James (Peter Mullan) for “fidelity.” Or rather, was testing the host version of his father to see if he was passable in society.

Based on the way the post-credit scene played out, the writers made it seem like Emily was running the same tests on her father. In short, the post-credit scene William is a host and Emily is a human. Whether that means William was a host or a human when he killed a possible host version of Emily remains to be scene. It’s all very confusing.

I loved season two, but I have to admit I would be very okay if season three was a lot easier to understand. Sadly, based on the season two finale, that may not be the case.