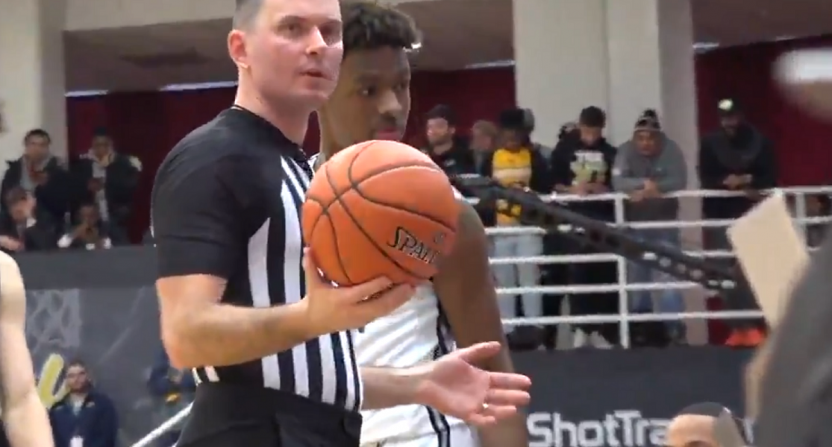 Bronny James and his Sierra Canyon team were in Springfield, Massachusetts today participating in a high school showcase affiliated with the Basketball Hall of Fame. With the Lakers in Boston tonight to take on the Celtics, LeBron was able to attend.

On the court things didn’t go very well for Bronny or his teammates, with Sierra Vanyon falling 70-62 and Bronny held scoreless. But in an odd, unfortunate moment, a fan appeared to throw candy (a Starburst, maybe?) at Bronny as the younger James was preparing to throw an inbounds pass.

Game was stopped and security was called out immediately to remove a fan that threw a yellow starburst or a piece of trash at Bronny James in the 3rd quarter.

With the game on ESPNU, a viewer at home appeared to catch the moment in which the spectator (seemingly a child maybe, though it’s hard to say) rears back and lets loose with the item.

Hey LeBron, just caught this kid throwing something at your son! Not cool! @KingJames pic.twitter.com/G93vHdZT2O

Hating has no age limit! 🤦🏾‍♂️. #JamesGang is build for it and well equipped. As we proceed 👑 https://t.co/6OzvGTxDEW

Please don’t throw things, and if you’re a parent of a kid who throws something, please punish them accordingly.