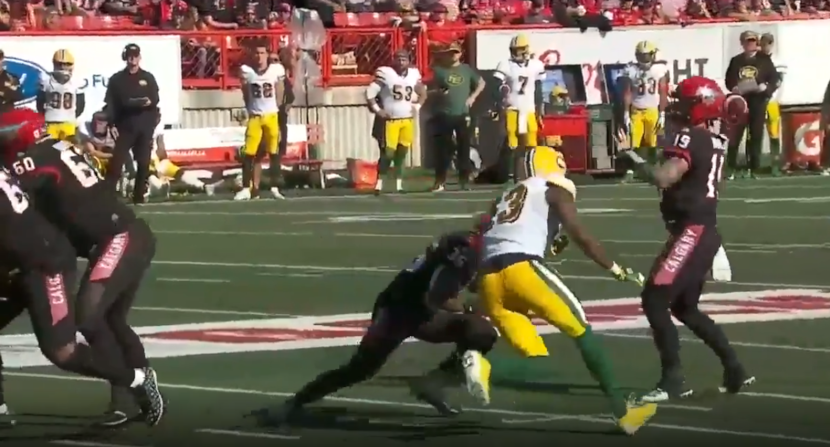 Calgary Stampeders’ quarterback and reigning CFL Most Outstanding Player and Grey Cup Most Valuable Player Bo Levi Mitchell was out of their lineup since June with a pectoral muscle tear, but he returned this week for their Battle of Alberta clash against the Edmonton Eskimos on Labour Day, and he picked up almost right where he left off. In the Stampeders’ 25-9 home win Monday against the Eskimos, Mitchell completed 19 of 28 passes (67.9 per cent) for 267 yards and a touchdown with no interceptions. Here’s the touchdown he threw, to receiver Reggie Begelton early in the fourth quarter:

Meanwhile, Edmonton quarterback Trevor Harris had a more up-and-down day. He completed 27 of 35 passes (77.1 per cent), but only threw for 216 yards, and wound up with no touchdowns and an interception. However, that interception wasn’t particularly his fault, as it came on a crazy tip-drill deflection after receiver Ricky Collins Jr. couldn’t haul a pass in, leading to Calgary safety Royce Metchie collecting an interception despite not being particularly near the initial pass:

Oddly enough, though, the Eskimos were the beneficiaries of a tip drill themselves not long afterwards on another Harris pass, one that Metchie tried to haul in but couldn’t. That bounced back towards the line of scrimmage and was caught by Edmonton receiver Natey Adjei:

So at least one bounce went their way. That was about it for the Eskimos though, and they’re now facing some challenges in terms of playoff positioning. The Saskatchewan Roughriders’ 19-17 win over the Winnipeg Blue Bombers Sunday combined with Calgary’s win Monday means that Winnipeg’s first in the West Division with a 8-3 mark, Saskatchewan’s second at 7-3, Calgary’s third at 6-4 and Edmonton’s now fourth at 6-5, ahead of only the 1-11 B.C. Lions.

While it’s quite possible the fourth team in the West will still make the CFL playoffs in the crossover berth (they just have to finish ahead of the third-place East team, currently the 3-7 Ottawa Redblacks), that can be a tough road to travel; a crossover team has never made it to the Grey Cup. And while there are still seven games left for the Eskimos and plenty of chances to move up, maybe even to as high as first, they’re looking substantially behind their West rivals at the moment.

Winnipeg and Saskatchewan have both played well, and while Calgary is closest to Edmonton in the standings, they’re the defending Grey Cup champions and an always-imposing team, perhaps especially now that Mitchell’s back. (And they’ve now won two of their three games against Edmonton this year, giving them the season-series tiebreaker if it comes to that.) We’ll see how the Eskimos do when they host the Stampeders in a rematch next Saturday, but for the moment, it looks like Calgary has the edge in the Battle of Alberta.