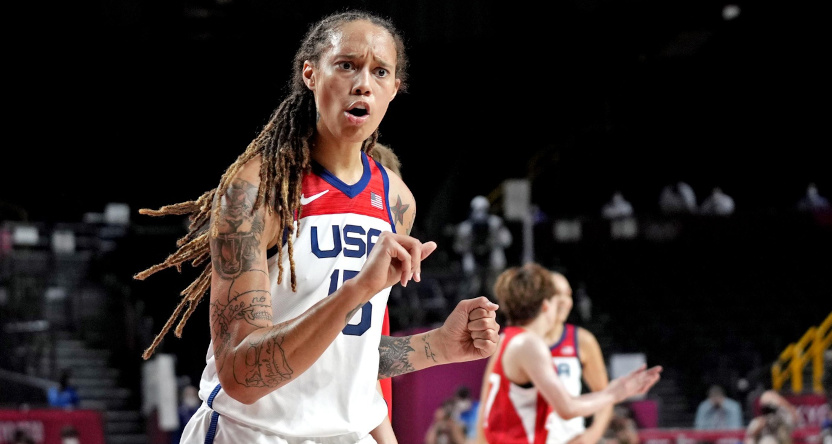 One of the most notable sports situations of the many around Russia at the moment is that country’s ongoing detainment of WNBA star and U.S. basketball Olympian Brittney Griner. Griner (seen above during the 2020 Tokyo Olympics’ gold medal game last August), who plays for the Phoenix Mercury during the WNBA season and has played in Russia for UMMC Ekaterinburg since 2014, was detained in February for allegedly carrying vape cartridges that Russian officials claimed had hashish oil. She’s been in pre-trial detention since. But that news only came out in March, after Russia’s invasion of Ukraine.

Media discussion of Griner’s situation has been complicated. As ESPN investigative reporter T.J. Quinn explored with ESPN Daily host Pablo Torre in March, many of those working to gain Griner’s release initially wanted limited coverage of it in the American media so Griner wouldn’t be seen as a valuable political bargaining chip. And even after congressmen Byron Donalds and Burgess Owens asked the State Department for details on Griner’s case, they received only a limited response, suggesting much of the work there was still playing out behind the scenes. Now, though, Quinn writes that the U.S. government is now shifting their approach and considering Griner “wrongfully detained”:

The U.S. government now considers WNBA star Brittney Griner to be wrongfully detained by the Russian government, signaling a significant shift in how officials will try to get her home, sources familiar with her case told ESPN.

…“Brittney has been detained for 75 days and our expectation is that the White House do whatever is necessary to bring her home,” Griner’s agent, Lindsay Kagawa Colas, said in a statement to ESPN on Tuesday.

The change in official designation means that the U.S. government will no longer wait for Griner’s case to play out through the Russian legal system and will seek to negotiate her return. It also means that Griner’s fellow WNBA players and supporters in Congress will be told they have the family’s blessing to bring as much attention to her case as they wish.

“We feel really good about it,” a source close to Griner said. “But we also know it can drag out, so we don’t want to get our hopes too high.”

Quinn’s piece has many more notable details on this, including that Carstens’ involvement doesn’t mean Griner is classified as a hostage: she’s classified as a wrongful detainee. The most significant part of that classification is that while Griner is still set for a hearing on May 19 (she has not yet been formally charged), the U.S. no longer considers those legal proceedings relevant to her case. Quinn also notes that former U.S. ambassador to the United Nations Bill Richardson (who’s been working as a private international hostage negotiator for the past few years) has agreed to work on Griner’s case, and he mentions that there’s some optimism here considering the recent release (in a prisoner swap) of former U.S. Marine Trevor Reed, who had been imprisoned in Russia since 2018.

The most notable impact of this change in U.S. government policy on Griner’s situation is that there’s no longer a case for journalists to limit their coverage of the issue, or for members of the public and elected officials to be muted in their advocacy for Griner. There was logic to that approach when this first came out, especially with those working for Griner’s release advocating for limited public discussion of this to try and get her released without turning her into a large bargaining chip. But that more low-key approach hasn’t worked out yet, and this shift in government policy means the way is now clear for more intense public and governmental advocacy on Griner’s behalf. That could lead to many in the sports world speaking up beyond what they’ve done so far.