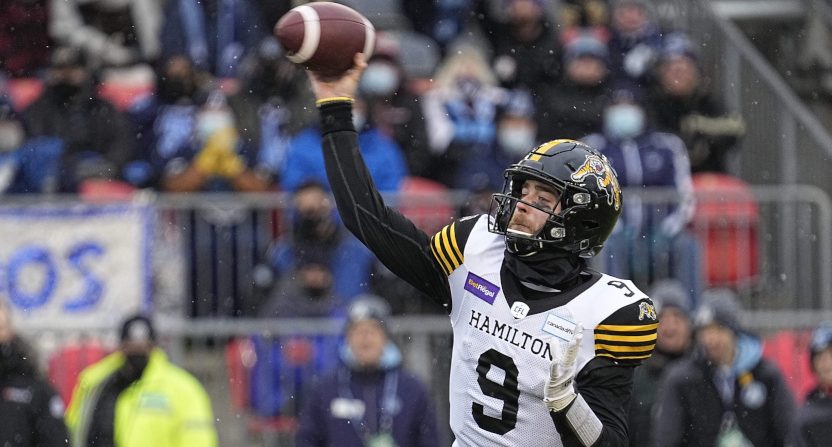 The Hamilton Tiger-Cats are hosting the Grey Cup this year for the first time since 1996, and now, they’ll be playing in it as well. Hamilton (8-6 in the regular season this year) beat the 7-7 Montreal Alouettes 23-12 at home in last week’s Eastern Semi-Final, then edged the 9-5 Toronto Argonauts 27-19 Sunday on the road in the Eastern Final. And Sunday’s game came after they had a rough first half, falling behind 12-0 early on. But a switch from Jeremiah Masoli to Dane Evans at quarterback partway through the second quarter paid off, including with Evans forcing a crucial fumble (on a return after a Hamilton fumble) that prevented Toronto from adding to that lead with a touchdown or a field goal:

And in the second half, the Tiger-Cats really came alive. First, Papi White returned a punt 92 yards for a touchdown:

Then, Evans led a drive that included this third-and-two conversion from him on a fake field goal:

The difference-maker on that last drive? ⤵️

Deep into the bag of tricks from the @Ticats!#GCPlayoffs pic.twitter.com/c2CkB1Zk2m

That drive ended with a 30-yard touchdown pass to Jaelon Acklin (who’s probably decently happy around now with his decision to give up on a dating show set in a European castle to return to the CFL):

Toronto got another point (a rouge off a missed field goal), but Evans led another long drive, and capped it with a touchdown plunge himself:

🐯 GREAT DANE: TOUCHDOWN 🐯@daneevans9 puches it in, and the @Ticats take the lead for the first time!#GCPlayoffs pic.twitter.com/AzctpyZPTs

And after a Toronto touchdown, Evans would cap another Ticats’ drive with another run himself:

Is this the dagger?@daneevans9 punches it in late for the @Ticats!

That would prove enough, with the Argos getting one more field goal but then proving unable to recover an onside kick. And Evans was spectacular on the day; he completed all 16 of his passing attempts for 249 yards and a touchdown, then ran six times for 16 yards and two more touchdowns. Evans has been with the Ticats since 2017 and has been their starter many times since then (including in the 2019 Grey Cup against Winnipeg), sometimes through injuries to Masoli and sometimes through coaching decisions, but he started this one on the bench. But he sure gave them a spark when he did come in.

It will be interesting to see if the Ticats start Evans in next Sunday’s Grey Cup, or if they go back to Masoli. On the season, Masoli completed 188 of 274 passing attempts (69.4 percent) for 2,445 yards with 10 touchdowns and six interceptions in nine games, while Evans completed 69 of 107 passes (64.5 percent) for 787 yards with six touchdowns and three interceptions. So either could get the call. But regardless, Hamilton will be in that Grey Cup. And the Tiger-Cats will have a chance to get their first Grey Cup victory since 1999, and their first in front of a home crowd since 1972.