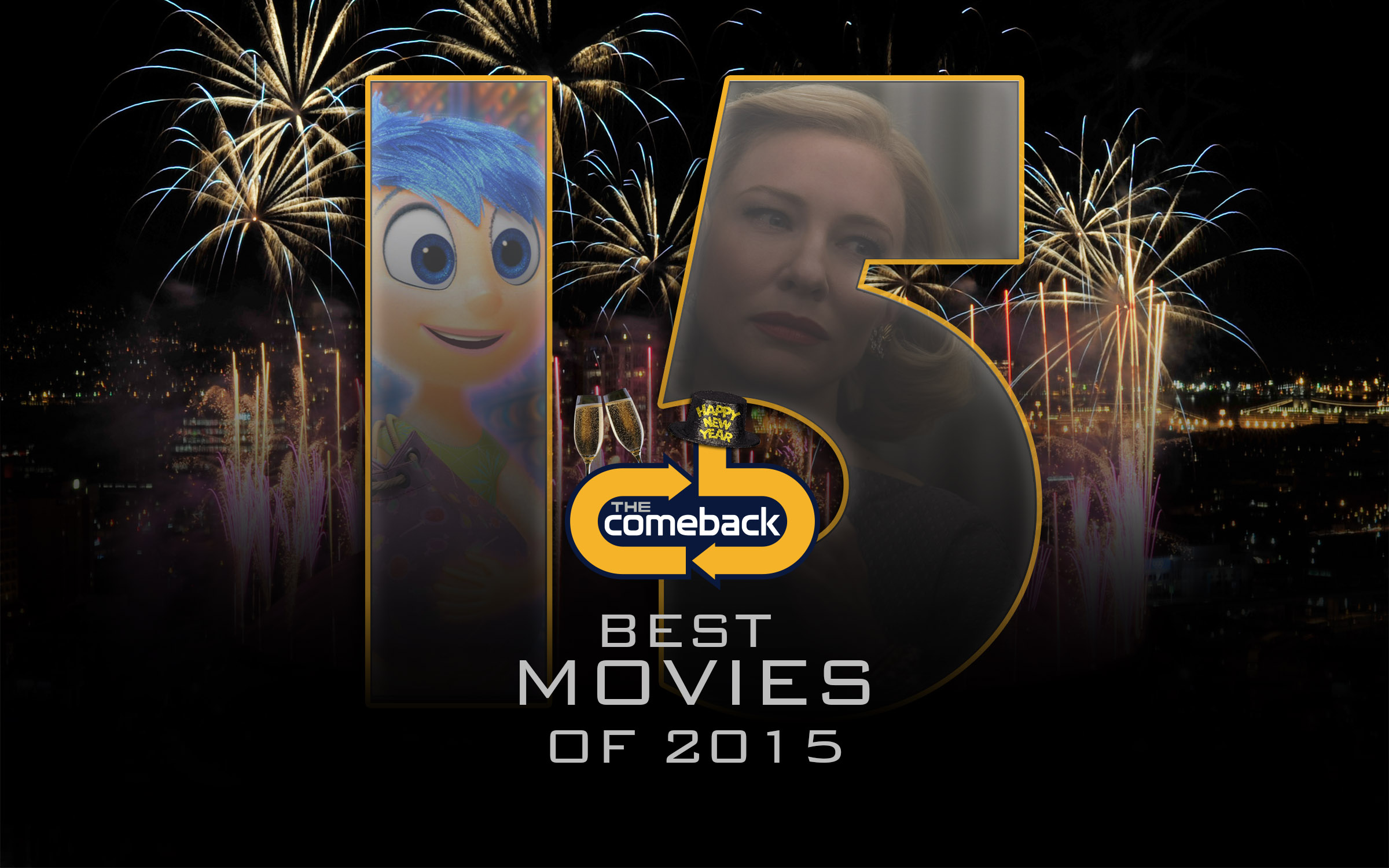 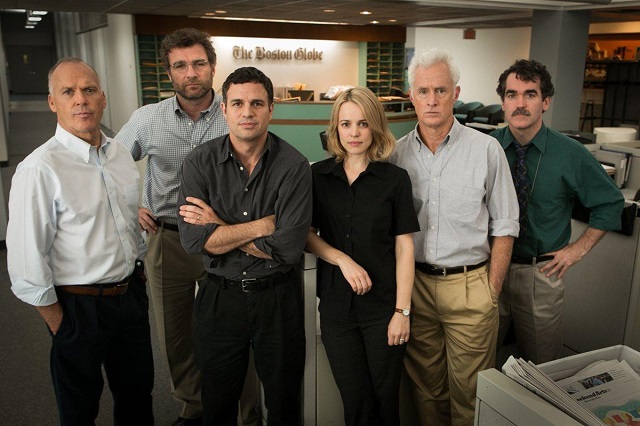 We can’t do Best of the Year lists and not have one for movies, right? It’s a staple of pop culture. The movie industry gives awards to itself for this stuff. If you go to the cinema from October through December, chances are you’re seeing a film celebrated as one of that year’s best. Movies are subjective to the viewer, of course, but we think our list is a reflection of what you’ve talked about with friends (besides Star Wars) and what will be receiving trophies. There’s comedy, action, drama and a whole lot of interesting characters. Kind of like life itself. Except the 15 Best Movies of 2015 are ranked.

This was no vanity project for Steven Spielberg and Tom Hanks, working together for the fourth time. The Cold War character drama might be the best film Spielberg has directed in 15 years. This is a movie about the best of us, in terms of our intelligence, pride and honor. But it’s also about the worst of us, how our governments and judicial systems, and our citizens, will toss aside civil and human rights because of what they believe and their irrational dislike for foreign powers. [IC]

Quentin Tarantino’s films are never dull. Few writers/directors do a better job of blending quirky, verbose characters, with unusual plots and unlikely alliances. The fun comes, as per usual with Tarantino movies, in watching these characters interact. One of the best scenes occurs when Major Marquis Warren (Samuel L. Jackson) explains to John “The Hangman” Ruth (Kurt Russell) his reasons behind a harmless lie. It’s poignant and still echoes given the state of race relations today. [MG]

Writer-director Adam McKay distills Michael Lewis’ book down to its most important elements, the institutions and key players involved in the building of the housing bubble and the credit default swap market created to capitalize on its collapse. His sharp writing, along with an outstanding cast that includes Christian Bale, Steve Carell and Ryan Gosling, somehow make financial jargon and a tricky story wildly entertaining. And unfortunately, painful to relive. [IC]

Writer Aaron Sorkin and director Danny Boyle didn’t make a biopic. They wanted to create an impression of Steve Jobs, rather than a historical account of the man. It doesn’t matter that Michael Fassbender looks nothing like Jobs because he embodies the Apple founder’s ferocious intelligence, vision and impatience. He’s arrogant, yet inspiring. And look what he accomplished because of that. The best way to think of this movie is as a play, and it is brilliant theater. [IC]

James Ponsoldt’s film is a fascinating exploration of the dynamics of an interview situation, especially one often used for a feature story in which the writer spends some amount of time with the subject. It’s an inherently phony circumstance, with each side trying to act like a friend while also attempting to portray a persona. David Foster Wallace (Jason Segel) and David Lipsky (Jesse Eisenberg) subtly battle for control, while also masking deep insecurities over their careers and lives. [IC]

Yes, Creed is a Rocky movie. And Sylvester Stallone gives the best performance of his career. But Michael B. Jordan showed he’s a true star, capable of headlining his own film. Writer-director Ryan Coogler sets his film in an authentic boxing world, and the fight scenes — shot in the ring with long takes — are thrilling. He pays tribute to the past while also creating a new potential movie franchise, serving notice as an impact filmmaker. [IC]

Even if you’re not a fan of The Beach Boys, the story of a genius – especially a tormented genius – is always appealing. Brian Wilson was the genius behind The Beach Boys. But he suffered through mental illness and was under the control of a dominating psychotherapist. The film expertly blends two timelines: one of the young Wilson (Paul Dano) and the other of his older self (John Cusack). For Cusack, this might be the best work of his four-decade career. [MG]

Bryan Cranston is Oscars-worthy as Dalton Trumbo, the Hollywood screenwriter who was blacklisted as a Communist. He went to jail and after his release he wrote under pseudonyms or willingly had others take credit for his work. Cranston is driven and witty. This is arguably the best leading performance of the year. The movie also benefits from Helen Mirren’s small but important role as Hedda Hopper, a powerful and cruel gossip columnist. [MG]

Did we really need a sequel to Mad Max Beyond Thunderdome 30 years later? Thankfully, George Miller believed that we did and brought us back to his post-apocalyptic world. It didn’t matter if you saw Mad Max or The Road Warrior previously, largely because Fury Road belonged to the most memorable movie character of the year: Charlize Theron’s ferocious Imperator Furiosa. Miller reminded us that action movies don’t have to be dumb; they can be amazing — and without the help of digital effects. [IC]

Well-acted and well-paced, Straight Outta Compton was a big hit with audiences and a critical smash too. This biopic of legendary hip-hop group N.W.A. from director F. Gary Gray is wildly entertaining. How much of it is truth vs. myth-making? Tough to say, since founding member Ice Cube was a producer. However, there’s no doubt about this: little-known Jason Mitchell (Eazy-E) is a breakout star in the making. Eazy-E was never the most talented member of a group that featured Ice Cube and Dr. Dre. But Mitchell provides an emotional core that centers the film. [MG]

The story takes place in a plausibly real world, mining its drama from those limitations. These spaceships can’t just jump into hyperdrive and teleport a marooned astronaut to safety. Missions take months to prepare. Money has to be found. Operations have to consider weight, time and distance for any chance at success.

What makes The Martian so good is that it celebrates humanity, demonstrating what intelligence and determination truly make possible. Cooperation between nations and really smart people working to the best of their capabilities allows for overcoming circumstances beyond anybody’s reasonable control. [IC]

Every now and then, you hear about a real-life terrifying story of a kidnapped woman kept in captivity for years; for example, the Cleveland women imprisoned by Ariel Castro. One of the women gave birth while being held captive: her tormentor’s child.

Room is a fictional, superbly told story of such a crime. What makes this movie special is that it’s explained through the perspective of a 5-year-old. Jack (Jacob Tremblay) has lived his entire life imprisoned with his mother (Brie Larson) in a locked shed. He has never been outside the “Room” and the only other outside human he occasionally sees is Old Nick, their captor.

Jack, now old enough to understand their plight, and his mother devise an escape plan. This is not a spoiler alert. This movie is more about the aftermath; the struggles they face while re-entering society. Larson is terrific and Tremblay, 9, deserves an Oscar nomination. [MG]

Purely as an immigrant story, Brooklyn feels vital to what’s going on in our country and the world right now. Our history is built upon people who came to the United States to create a better life for themselves, something absolutely worth remembering through film and literature.

The movie also works as a great romance — between a young woman and man, but also between Irish immigrant Eilis Lacey (Saoirse Ronan), the woman she becomes and the life she builds for herself. Watching Eilis find herself as the story progresses is a joy to watch.

It’s difficult to imagine anyone not finding something to like here. The characters are compelling, Nick Hornby’s script is witty and sharp, and director John Crowley’s visuals (notably the use of color) are beautiful. Eilis’ story is our story in so many ways.

Kristen Wiig earned indie cred with last year’s vastly underrated The Skeleton Twins. Her portrayal of Alice Krieg — a lottery winner with a personal disorder who is off her meds and starring in her own public-access talk show — is extraordinary.

Krieg’s downward spiral starts out as an amusing lark. But as her behavior turns more erratic, her eccentricities seem more like a desperate cry for help. This all comes to a head in a terrific scene with her best friend (Linda Cardellini), who is going through her own troubles.

The film has its detractors who are bothered by its depiction of the mentally ill. But on a broader note, Krieg is a hurting soul who tries to find validation through media fame. In our reality TV, selfie, YouTube obsessed culture, that point strikes close to home. It’s funny, sad, strange and uncomfortable. [MG]

The public generally doesn’t understand or appreciate journalism. Imagine how difficult it is to grasp what reporters go through to tell complex and emotional stories. Spotlight gets it right, which makes it the best movie on journalism since All the President’s Men (1976).

The target of scrutiny is powerful. The crime horrific. In 2002, the Boston Globe published ground-breaking stories about the sexual abuse of children in the Catholic Church. The Globe won a Pulitzer Prize. This film deserves an Oscar nomination.