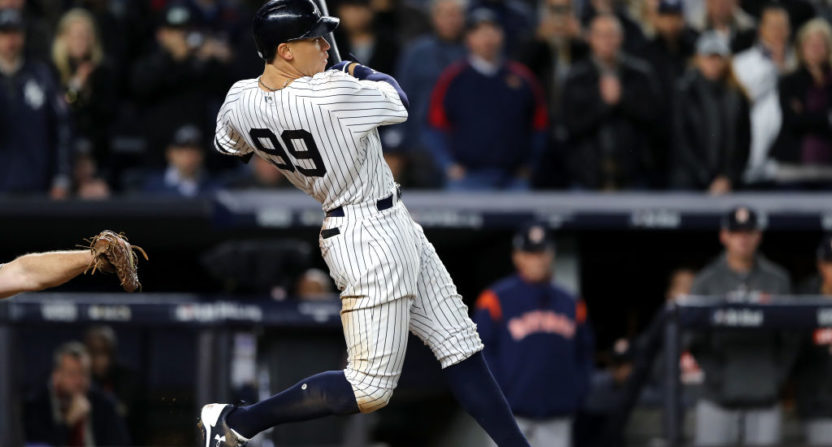 When Aaron Judge stepped to the plate with the bases loaded in the fourth inning of Monday’s ALCS Game 3, you could practically hear Yankee fans everywhere groan.

Yes, Judge is an MVP candidate and one of the most fearsome sluggers on the planet, but he was also 2-for-28 since the start of the ALDS with an almost unbelievable 20 strikeouts.  An inning-ending K felt inevitable.

But Astros relief pitcher Will Harris bounced a wild pitch to score the Yankees’ fifth run, and Judge did the rest, smacking a 3-run home run to left field to put his team’s lead out of Houston reach.

Aaron Judge comes alive in the playoffs in a BIG way https://t.co/LckWTdzVqH

Judge’s blast was a key moment in the Yankees’ eventual 8-1 victory, which narrowed their series deficit to 2-1, but it was also an encouraging sign for a slumping star. Judge has been befuddled all postseason by breaking balls away, but he showed clearly that he can still handle a fastball if a pitcher dares throw him one.

And though that game-sealing home run was Judge’s most dramatic contribution to the Yankees’ victory Monday, it wasn’t his only big moment. In the top of the fourth inning, he leaped against the right-field wall for a tremendous, highlight-worthy catch.

And in the fifth he dove to rob Houston of another hit.

Judge was only one of several Yankees to step up Monday in what was essentially a must-win. The Yankees first took the lead in the second inning on a bizarre home run from Todd Frazier on a low-and-away pitch that appeared substantially out of the strike zone. That the ball sailed over the fence was a testament to Frazier’s strength, Yankee Stadium’s short porch and maybe even the makeup of the baseball.

New York also got a timely performance on the mound. Making his 21st career postseason start, CC Sabathia fired six scoreless innings, striking out five and allowing only three hits. The 37-year-old lefty faced jams in the second, fifth and sixth but again and again put away a tough Astros lineup before it could dent him.

Astros starter Charlie Morton’s line for the evening looked ugly (3 2/3 innings, six hits, seven earned runs), but he suffered from some severe bad luck. The Yankees’ first three runs came on an infield single, a bloop and Frazier’s wacky homer. He gave up a RBI infield single to Chase Headley in the fourth, then watched three inherited runners score on Judge’s home run off Harris.

With Morton out of the game early, Colin McHugh gave the Astros some much-needed innings, saving the Houston bullpen with four scoreless frames. On the other side, Adam Warren threw two scoreless innings, but Dellin Betances walked both batters he faced in the ninth and was promptly removed. Tommy Kahnle entered and allowed a single and a walk before inducing a Jose Altuve double play to close out the victory.

The Yankees’ win gives them more than a puncher’s shot in the series as they head for Tuesday’s Game 4, which will pit Sonny Gray against either Brad Peacock or Lance McCullers. With a rested bullpen, a home crowd behind them and a (potentially) revived Aaron Judge, the Yankees are certainly not through yet.