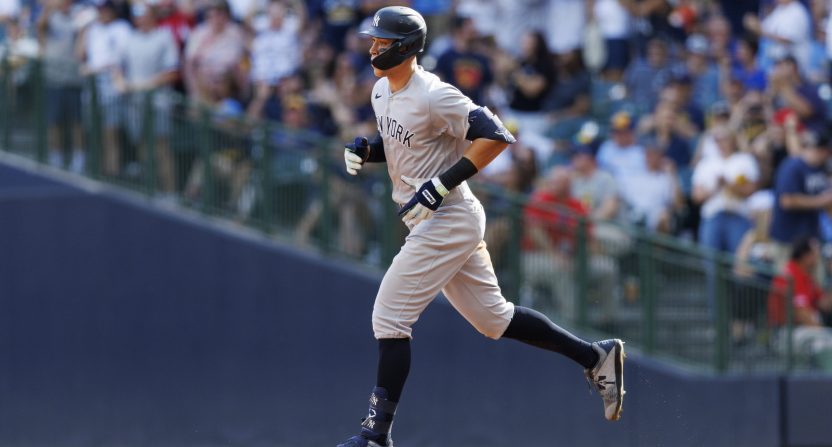 As we get closer to the MLB postseason, one of the most interesting storylines in all of baseball is New York Yankees star Aaron Judge’s race fo the AL record for home runs in a season.

Judge came into Sunday’s game against the Milwaukee Brewers with 57 home runs, but added to it in a big way with an impressive performance for the Yankees.

The MLB home run leader notched home run No. 58 with a blast off Brewers starting pitcher Jason Alexander on a solo home run.

The Yankees got to Alexander early and often in the game, knocking him out of the game in the top of the fourth inning.

Things did not get better for the Brewers when they turned to the bullpen, and Judge capitalized with a no-doubt home run off of relief pitcher Luis Perdomo to bring his total to 59.

59th of the year. 2nd of the game. #AllRise pic.twitter.com/5XKksQuDYX

Judge’s excellent performance has many taking to social media to express just how special of a year this has been for the Yankees slugger.

Should be the unanimous MVP

And the reliever threw a hanging slider down the middle. Only a double (mid)

It's a two-run double for Aaron Judge and the #Yankees lead Milwaukee, 12-6. He is something else.

Judge came up to the plate in the top of the ninth inning looking for home-run No. 60. Making solid contact, Judge hit a double to the warning track, which shockingly feels like a disappointment considering how great he has played.

The veteran outfielder has left no doubt whatsoever that he is the AL MVP with his recent stretch of play, strengthening his batting average to .316 on Sunday which is tied for the league-high in the American League while also having 59 home runs.

He is now 2 home runs shy of former Yankees star Roger Maris’s record for the most home runs in American League history, and may very well get a Triple Crown in the AL if he can keep his batting average up.

This season from Judge is the best that we have seen in quite some time from any player, and he still has 16 games remaining in the regular season to add to his shockingly great totals.