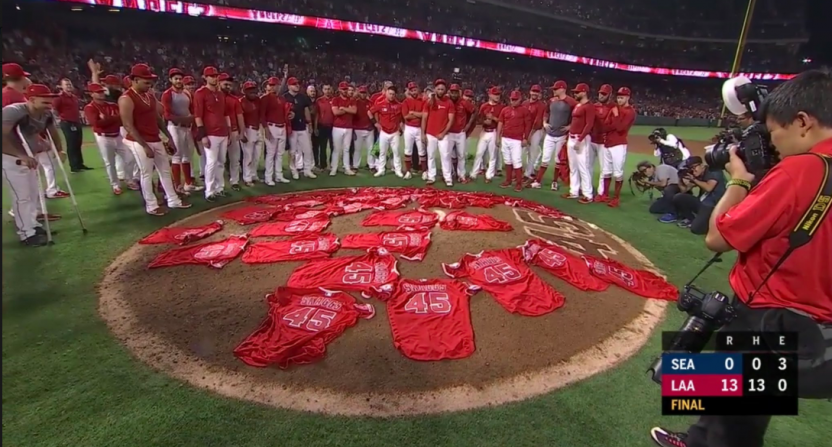 The Los Angeles Angels couldn’t have given a better tribute to late teammate Tyler Skaggs than they did on Friday night.

In the first home game since the 27-year-old pitcher’s death, the Angels had a beautiful pregame ceremony which featured Tyler’s mother Debbie throwing out the first pitch and included a moment of silence.

Images of Skaggs and his No. 45 were featured throughout the stadium, and the entire Angels’ team wore No. 45 Skaggs jerseys.

Mike Trout hit a 454-foot homer in the No. 45 jersey on the very first pitch he saw.

And then the Angels’ pitchers went on to throw a combined no-hitter. Yes, really- Taylor Cole (2 innings) and Félix Peña (7 innings) combined to throw the 11th no-hitter in Angels history, in a 13-0 Angels win over the Seattle Mariners.

The Angels threw a no-hitter for Tyler Skaggs. pic.twitter.com/Bngi3ZT40p

"Now we have an angel taking care of us in heaven." -Pena on the loss of Tyler Skaggs and the @Angels first game back in Anaheim pic.twitter.com/NxoBJfzg6A

"This was definitely for him and he was definitely watching over us tonight."@MikeTrout joined @KellyNash on #QuickPitch after the @Angels no-hitter. pic.twitter.com/bhda4LhydM

Taylor Cole on the combined no-hitter after honoring Tyler Skaggs with the pregame ceremony that saw Skaggs' mom throw a perfect strike. "It all started with Debbie. She threw it right down the middle … couldn't have started it with a better pitch."

Daniel Vogelbach on the pregame ceremony honoring Tyler Skaggs: "If that doesn't give you chills or that doesn't make you put life into perspective, I don't know if you have a heartbeat."