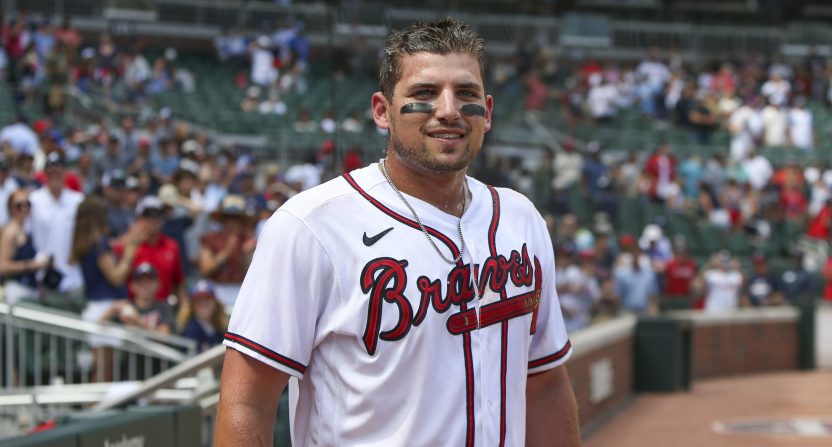 Third baseman Austin Riley has been one of the best hitters on the Atlanta Braves for the last two seasons. He’s hit .302/.364/.560 with 62 home runs over the last two years. On Monday, he got rewarded financially for his hitting prowess.

The Braves announced on Monday that Riley had signed a 10-year deal worth $212 million. The deal will run through 2032 and has a $20 million club option for the 2023 season.

The Atlanta #Braves today signed 3B Austin Riley to a 10-year contract worth $212 million: pic.twitter.com/TdPVtpYnL5

While activity around the trade deadline is getting most of the attention around the MLB world, Riley’s massive extension also drew a big reaction.

Well deserved. Riley is a centerpiece for the Braves over the next decade. https://t.co/d9cgGVu3M3

Austin Riley has parlayed his ascension to an MVP candidate into a long-term contract extension with the #Braves. This the largest contract in franchise history. https://t.co/G8RmwZiwyn

Austin Riley's 61 extra-base hits are the 2nd-most by a Braves player before August in a season, trailing only Hank Aaron's 68 in 1959.

Riley's 26 extra-base hits in July passed Hank Aaron (25) for the most XBH in a single month in Braves history. https://t.co/chb1NXq9d5

CONGRATS: Could not have happened to a more humble, harder working or better person than Austin Riley… Now go out and win the #MVPAward👇 https://t.co/j7TZaQtCl1

What’s even better for the Braves and their fans is that Riley is only 25. For the most part, power hitters tend to peak in their late-20s and early-30s. So, as good as Riley has been so far, the best may be yet to come. Also, as power tends to be one of the last skills to leave players, the forecast is good for him to be a valuable hitter throughout the contract.