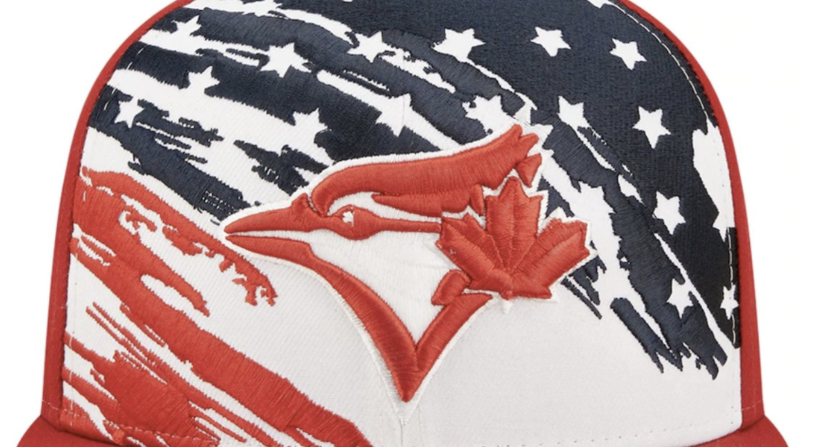 For better or worse, when you slather something in the red, white, and blue in 2022, it’s going to invoke some very specific imagery. That’s certainly the case for a lot of baseball fans when they look at Major League Baseball’s 2022 4th of July caps.

Major League Baseball recently announced the cap collection. All MLB teams will wear the caps from July 1 to 4, though we wouldn’t hold it against the Toronto Blue Jays if they decided not to.

Major League Baseball releases the 2022 4th of July cap collection, teams will wear this from July 1-4 (I'm betting the Blue Jays will not be wearing theirs for at least one of those dates)

My story with my thoughts, more pics and info on how to buy here: https://t.co/BhO1jR3NMF pic.twitter.com/1dWtETU5y5

2022 marks the 15th year of MLB’s “Stars & Stripes” hats being worn on and around Independence Day Weekend.

In recent years, there’s been a strong correlation made between people who wear clothing adorned with the U.S. flag and those involved in situations such as the January 6 insurrection or believers in The Big Lie, which would seem ironic if not for being so disturbing. Still, that didn’t stop baseball fans and others from cracking very similar jokes about the type of person most likely to wear one of these red, white, and blue-streaked hats.

These look like caps that you’d wear to storm the Capitol building. https://t.co/HI1pywQBqr

these caps want to see audits in arizona and pennsylvania https://t.co/IOnIx5kuoS

And of course, the fact that there’s a Toronto Blue Jay’s cap celebrating the United States of America was not lost on people.

Who wants to tell them? https://t.co/xdG6D5EW4x

It’s like the year I wore a throwback Nationals cap on the 4th of July. Of course the throwback was a Montreal Expos hat. https://t.co/uo6tI8YYh4

Who wants to tell MLB there's sort of a cognitive dissonance with a Toronto Fourth of July hat? @UniWatch pic.twitter.com/ad8Ept0XiX

We’re guessing we won’t see too many MLB teams wearing Canada Day caps on July 1, though.