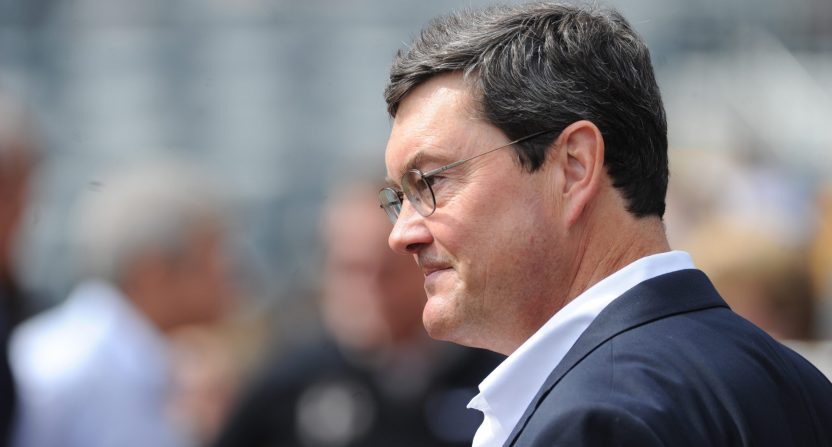 It’s been a rough few decades for the Pittsburgh Pirates. They have had only four winning seasons since losing Barry Bonds following the 1992 season. While not all of that can be blamed on owner Bob Nutting, his thrifty behavior hasn’t helped matters. One fan decided to troll Nutting and did so right under his face.

A fan who was wearing an unbuttoned jersey with what appeared to be a black Pirates shirt asked Nutting for a photo. The owner obliged and shortly after he did, the fan moved part of his jersey to reveal the actual message on his shirt, “Sell the team” in yellow letters.

Nutting did notice the shirt and appeared to even read it but opted to take the photo anyway.

The moment did not go unnoticed in the MLB world.

Not all heroes wear capes. Some wear unbuttoned jerseys. https://t.co/PJYPhdbC1I

Am I the only one who respects Nutting for still smiling and taking a picture with the guy? https://t.co/gkLB3ICtU0

It’s hard to tell if Nutting recognized what the shirt said or just thought that it was a regular Pirates shirt, since it does match the color scheme. He definitely gave it a good look, though.

If Nutting did notice the message on the shirt, he does deserve some credit for smiling and taking the photo anyway. Not all owners would do that. We’re also sure that he’s used to the message by now.

Nutting became the Pirates principal owner ahead of the 2007 season. That timeframe includes the 2013-2015 run, where Pittsburgh made the playoffs three years in a row. But it also includes two different seasons of 100 or more losses, five other seasons of at least 90 losses, a dismal 19-41 record (easily over 100 losses if extrapolated over 162 games) in 2020’s COVID-19 shortened season, and a 2022 season that — even after a win on Wednesday — has the Pirates on pace to go roughly 65-97.

And while Nutting isn’t 100% responsible for that futility, Pittsburgh has MLB’s third-lowest payroll in 2022 and consistently ranks at or near the bottom of the league. So, he’s not helping. We can appreciate Nutting still taking the photo, we can also understand the feelings of the fan wearing the shirt.