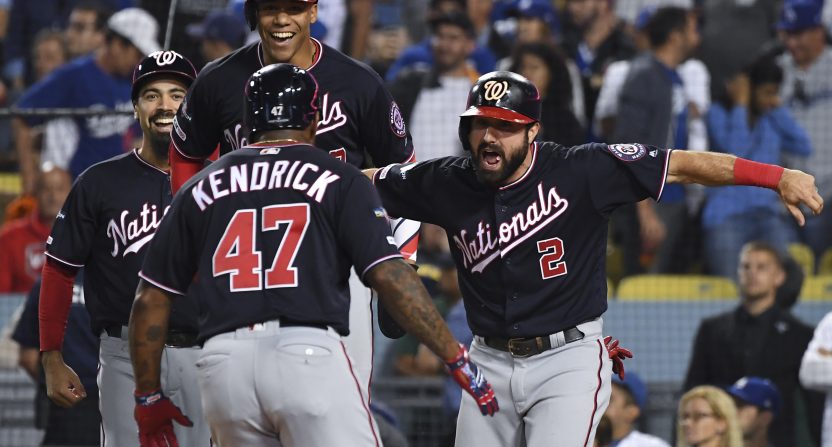 As the LA Dodgers and Washington Nationals squared off in Game 5 of the NLDS, things sure started strong for the home team. But in the end, it was the Washington Nationals who came back once again this postseason. And after getting back-to-back home runs off of Clayton Kershaw in the eighth, and hitting a grand slam in the 10th inning, it would be the Nationals winning 7-3 and advancing to the NLCS to face the St. Louis Cardinals.

The Dodgers were in control at the start of the game. It wasn’t a 10-run first inning like the Cardinals had but they had a strong first. Joc Pederson hit a rather unusual double after his hit went into a bullpen door and through the fencing.

Joc Pederson with one of the weirdest doubles we've ever seen. pic.twitter.com/rjGbsJMPCN

Thinking it was a home run, Pederson had to stop at second base. His stay on second was short lived as Max Muncy took Stephen Strasburg deep on the next at-bat.

THAT one is over the fence! #NLDS pic.twitter.com/RkwjV3gaTL

The Dodgers kept up this run in the second as Kiké Hernandez went deep on Strasburg to give LA a 3-0 lead.

After almost seven innings of flawless pitching where he only allowed one run and four hits, Walker Buehler’s night was over and Kershaw was in charge. That’s when the wheels fell off for the Dodgers and the Nationals came back to tie 3-3. Anthony Rendon and Juan Soto hit back-to-back homers off Kershaw as Kershaw was immediately replaced with only getting a single out, continuing his lackluster postseason career.

Tied 3-3, Game 5 went to extras and the Nationals took total control for the win. Adam Eaton was walked to start the inning, as Rendon hit a double right after. With runners on the corners, Soto was intentionally walked to face Howie Kendrick. While loading the bases seemed like conventional strategy, Kendrick made Joe Kelly pay as he rocked a grand slam to put the Nationals ahead 7-3.

After falling back early and coming back late to win the NL Wild Card Game, the Nationals are now in unchartered territory. They face the Cardinals in the NLCS and after eliminating the top seed in the NL, the Nationals now see an opening to a potential pennant. Problem is, the Cardinals will not be pushovers and really want to get back to the World Series for the first time since 2013.