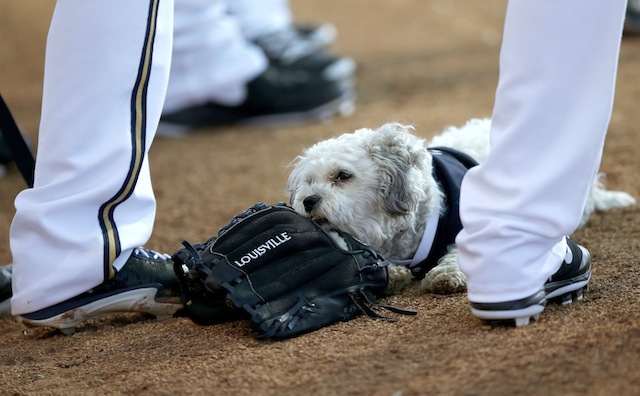 There was no better story during MLB’s 2014 Spring Training than that of the Milwaukee Brewers and “Hank the Dog.” But, what if we told you the feel-good story has turned in to a full-blown conspiracy theory and that the dog you see today wasn’t the same as the one from 2014?

According to a recent report, that’s exactly what is happening — and the conspiracy theory of “Hank the Dog” of 2016 as an imposter is gaining steam.

It all started back in 2014, and the story goes something like this: a stray dog wandered in to the spring training facilities of the Milwaukee Brewers at Maryvale Baseball Park, was adopted by the team and became an unofficial mascot that won the hearts of fans too.

Eventually, “Hank the Dog” won his way in to becoming a real mascot with his own home at Miller Park and his own promotional items like plush toys and bobblehead dolls.

However, two years later the “Hank the Dog” seen at Maryvale and at Miller Park appears to be a very different-looking dog indeed and we all have Brewers blog Brew Crew Ball to thank for this conspiracy theory.

It’s something those in the Brewers’ online world have been theorizing on since late in 2015 as new pictures of the pup emerged online.

On a fresh note, even Hank’s handler is in on the conspiracy now.

had a photo op with "Hank" last year. his handler did her best to hide him from me. she knew i was onto something. pic.twitter.com/U67vKcqIUN

See, a dog hiding its face from the camera isn’t about a dog being..a dog, but rather not wanting anyone to know it isn’t the real one that the baseball world grew to know and love in 2014.

New look or different dog? The Brewers didn’t diffuse the conspiracy replying to Yahoo with:

“The “real” Hank? What is real and what is an impostor? Is the Tooth Fairy the next target? Santa Claus? The Great Pumpkin?”

… but Hank is Hank, and I'm guessing the Brewers are working on ways to calm your concerns about him. Stay tuned I suppose.

The dog lover in me is just hoping original Hank is okay. Until we get clarification from the Brewers the conspiracy will continue to gain steam.