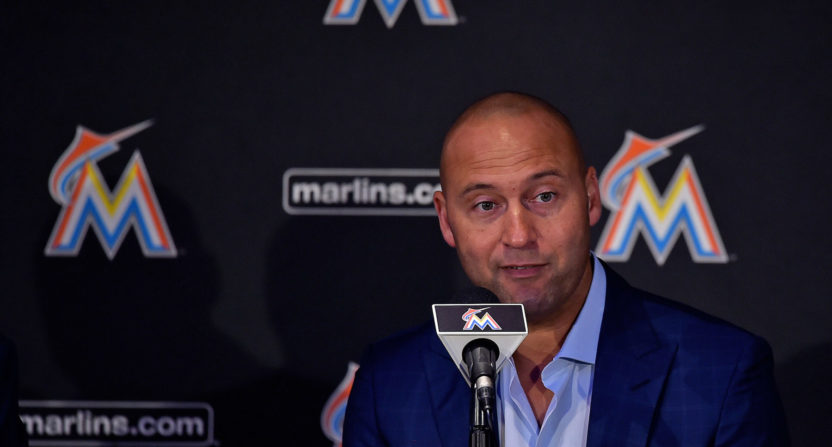 Derek Jeter’s brief tenure as CEO of the Miami Marlins has already featured a glut of controversies. Since Jeet took over in August, the Marlins have fired franchise icons, spoken repeatedly about slashing payroll and expressed a desire to trade NL MVP Giancarlo Stanton. But no Jeter story is quite as jarring as the one Yahoo’s Jeff Passan reported Friday.

Per Passan, the Marlins fired a scout who was in the hospital, recovering from colon cancer surgery and waiting on a kidney transplant.

The Miami Marlins let go of a longtime scout in need of a kidney transplant as he lay in the hospital days after undergoing colon cancer surgery, the latest in a series of questionable decisions made by the organization under the stewardship of newly installed CEO Derek Jeter.

Marty Scott, who joined the Marlins as a vice president in 2011 and in recent years had worked as a scout, said he was told his contract would not be renewed Oct. 16 while at the Cleveland Clinic in Weston, Florida, where doctors three days earlier had removed a cancerous tumor and polyps from his colon. Doctors initially found the cancer in late August as Scott underwent a battery of tests in preparation for a kidney transplant needed because of diabetes.

There’s not much to say about this except… yikes. When Jeter took over the Marlins, he was supposed to be somewhat of a savior, rescuing a desperate franchise from the clutches of hated owner Jeffrey Loria. No one expected that Jeter (and the money men behind him) would be not only as cheap Loria but also as much of a cartoon villain.

What’s maybe most striking about all this is how terrible at public relations the Jeter-led Marlins have been. As a player, Jeter was known for never saying the wrong thing or stumbling into a controversy. As an owner, he can’t make a personnel move without it becoming a fiasco. How difficult is it to not fire a guy who’s in the hospital with several major medical conditions? How can you not realize that is a terrible, maybe inhumane, idea?

This story doesn’t get any better when you delve into the details. In fact, it gets kind of heart-breaking.

Scott sat in limbo for more than two months. Contrary to the team’s accounting of the story, he said he spoke [with pro scouting director Jim] Cuthbert about a week before his surgery, curious about his status. On Oct. 16, he said, his phone rang and he saw Cuthbert’s name on the caller ID.

“My heart sank a little bit,” Scott said. “At the same time, I thought, ‘They’re not going to do this while I’m in the hospital.’”

He said Cuthbert was apologetic. Scott said he had hoped to speak with someone in upper management but never heard from Jeter or Hill.

“I didn’t want to get upset, get my blood pressure up,” Scott said. “I was lying in a hospital bed and couldn’t move.”

Jeter’s strategy for deflating this controversy seems to be blaming the whole thing on president of baseball operations Mike Hill, who, of course, works for Jeter.

1/Talked to spokesperson hired by Jeter administration and he wanted to make clear this firing was done by pres. of baseball ops Mike Hill and that much of the negative reports in Jeter watch is clean up from previous ownership mess. https://t.co/q1Ky2AMEmn

2/Some quick thoughts: is this what Jeter really wants, to displace the blame to Hill? Hill works for him now so if this is a bad move it reflects on Jeter. As for cleaning up previous mess, Jeter knew he was buying a toxic dump of a franchise , not the Yankees

Yes, winning is important. Maybe Marty Scott was a bad scout and firing him seemed like a good way to save some money that could help the Marlins one way or another. But it’s also important that people be able to afford life-saving medical procedures, and you shouldn’t need much management experience to understand that.