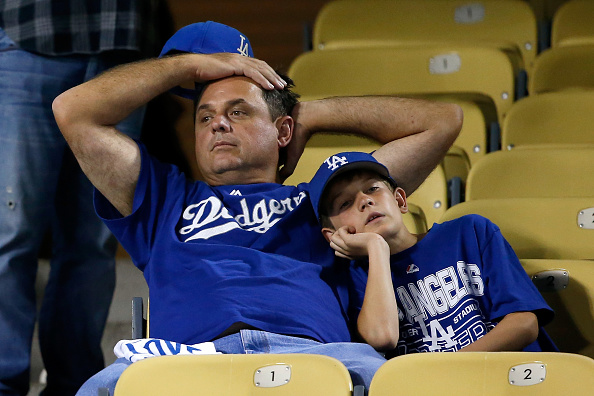 MLB offseasons generally aren’t “won” or “lost” in the span of a few weeks to close out the year. Hell, the Nationals “won” the offseason last winter when they signed Max Scherzer on January 21st. But make no mistake about it – what’s gone on, or hasn’t gone on, in Los Angeles this offseason has been a complete disaster for the Dodgers.

That’s it. That’s the list. Meanwhile, the Giants added both Johnny Cueto and Jeff Samardzija to their rotation, and the Diamondbacks added Zack Greinke and Shelby Miller to their starting give. The three-time defending NL West champion Dodgers currently have a rotation of Clayton Kershaw, Anderson, Alex Wood, Mike Bolsinger, and…uh…the injured duo of Brandon McCarthy and Hyun-Jin Ryu?

Los Angeles also saw their two major transactions of the offseason fall apart. First, their proposed trade with the Reds for Aroldis Chapman collapsed when news of Chapman’s domestic violence incident earlier this offseason became public. Then on Thursday, their three-year, $45 million deal with Hisashi Iwakuma was pulled when Iwakuma failed his physical. He ended up re-signing with the Mariners on a one-year deal that contains a pair of vesting options.

A lot can change quickly in the MLB offseason. The Dodgers could trade some of the prospects they’ve hoarded for Jose Fernandez, ship out one of their bad outfield contracts, and sign a high quality reliever or two, and the tenor of their offseason would dramatically flip.

But that hasn’t happened yet, and right now, this is a team in a pretty bad situation. Yes, the Dodgers did win 92 games and claimed the NL West by eight games (the second largest margin between first and second in any division in baseball behind the Royals in the AL Central). They moved into a tie for first place on April 17th, and didn’t fall from the division’s top perch for the rest of the year. However, the Dodgers also never pulled away from the Giants until September. Their lead was never more than 8.5 games all year. As late as August 23rd, they were only 1.5 games up on San Francisco. This was a team that benefited from playing in a bad division, and took advantage of that to win the crown.

Right now, the Dodgers have a shaky rotation past Kershaw, a shaky bullpen in front of dominant closer Kenley Jansen, an injury-prone, inconsistent outfield, and an infield that may be best described as “completely filled with questions”. Oh, and nearly the entire coaching staff is new. But hey, aside from all of that, everything is going great for the Dodgers!

Los Angeles didn’t need to dramatically reshape their team this winter. However, they didn’t exactly do much to inspire confidence, especially in a division that looks a lot better heading into 2016.

I do think the Dodgers will do *something* over the next few weeks to inspire some confidence from the fanbase, be it a trade (probably) or a free agent signing. This isn’t an organization that rests on its laurels, especially in recent seasons after Frank McCourt was forced to sell the team. I just don’t see any way the Dodgers can go into the 2016 season with that unimpressive rotation, that mediocre bullpen, and the same outfield woes that plagued the team a year ago. If they do, a fourth straight division crown looks like a longshot.