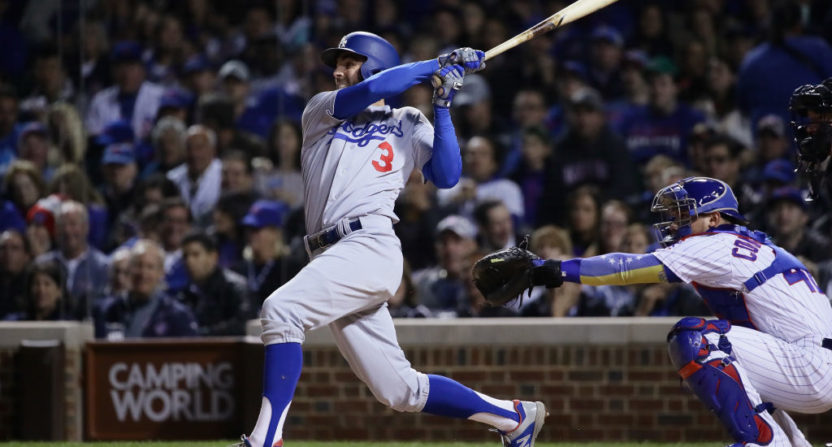 Just like we all envisioned, it was Andre Ethier and Chris Taylor powering the Los Angeles Dodgers to an NLCS win in 2017. The team with the best regular season record in baseball is getting production from its entire roster, and Tuesday’s 6-1 win over the Cubs at Wrigley Field puts the team a victory away from the World Series for the first time since 1988.

In the bottom of the first inning, Kyle Schwarber crushed a home run and it looked like the Cubs had gotten their groove back. Fortunately for Los Angeles, Yu Darvish gave up just the one run despite allowing three hard hits in the first inning.

The Dodgers answered right back in the second with a home run from Andre Ethier. Yes, that Andre Ethier. The 35-year-old outfielder has played in a total of 38 games the last two seasons, but he justified his presence on the NLCS roster with a pair of hits Tuesday, including a solo home run in the top of the second to tie the game 1-1.

In the third inning, it was Chris Taylor’s turn to step up. Taylor, who started at shortstop Tuesday after playing centerfield in the first two games of the series, hit a 444-foot home run to put the Dodgers in front for good. He also added an RBI triple in the fifth inning.

Corey Seager’s absence figured to loom large when it was announced he was not part of the Dodger roster for the series. It has, but not in the way anyone imagined. Charlie Culberson and Chris Taylor have stepped up to capably fill the void.

Oh, and Yu Darvish. The Dodgers finally have the rotation depth they’ve lacked in recent seasons. After a rocky first inning, he settled down and turned in a gem. He struck out seven and walked just one while allowing just one run and working into the seventh inning. He also drew a bases-loaded walk at the plate.

The Cubs just did not look like themselves Tuesday. Chicago didn’t execute, committing a pair of errors that led to two unearned runs.

The Dodger bullpen threw up zeroes as well, with Kenley Jansen finishing off the Cubs to seal the win.

Los Angeles has a chance to sweep the Cubs on Wednesday, and it won’t be Clayton Kershaw on short rest for the first time in recent memory. Instead, the Dodgers turn to Alex Wood in Game Four, while Jake Arrieta is on the mound for the Cubs as the defending champs try to stave off elimination.

It’s not over, but the Dodgers have to feel pretty comfortable after three games. The city’s public transit is certainly feeling good. It’s inarguable that Chicago has better public transportation than Los Angeles, but don’t tell the LA Metro’s social media team.

Happy to see our friends and colleagues at the @cta providing great service to all the @Cubs fans leaving the game early! ?⚾️?